Thank you so much for letting me guestblog today, Lisabet!

Winter Howl was my first novel and features a young woman who suffers from agoraphobia and accompanying panic attacks. Renee requires a service dog to get around outside her property—a service dog who is also a canine shapeshifter and her best friend and lover, but a service dog nonetheless around the rest of the world’s population.

Renee is the only person who lives at the sanctuary who’s human. Everyone else is a shapeshifter or a werewolf, and so she’s used to being the least powerful in the room (practically speaking). She’s awkward around people and doesn’t think much of her abilities and worth, the events of Winter Howl notwithstanding. She thinks she depends a great deal on her core pack of shapeshifters that help her run the sanctuary, and she’ll defend her sanctuary and its inhabitants to the death long before she’ll fight for herself. (None of those were spoilers for Winter Howl’s ending. They’re descriptions established in the first chapter of the novel.)

Enter Kelly in Cry Wolf, the second book in the Sanctuary series and a bit of a standalone, although it features significant spoilers for Winter Howl. It starts a few months after Winter Howl ends and directly deals with some of the repercussions of it.

If Renee’s a small, scared little girl in a big world, Kelly switches gears almost entirely. She’s a witch who was turned into a werewolf and really has more power than she knows what to do with, so she tamps down as much as she can. And she’s just left her werewolf pack after killing the alpha in order to protect Renee, and because she’s a bitch, she can’t just take alpha’s place, natch (there’s some serious misogyny ingrained in the werewolf pack dynamics, but that’s “just the way things are”). She could have been killed for it, but she had to be exiled instead because everyone else was afraid to take her on, although they’d never say so out loud.

Seems like the polar opposite to Renee, and in some ways, Kelly has to be for this series. But while it was a true pleasure to write someone with shitloads of power who got to choose to defer, choose to submit or dominate, choose to join a pack or not—all these different choices that a girl gets to make when she can kill you with her brain or her teeth or any number of ways like a mystical Swiss Army Knife—one of the big themes of the Sanctuary series is fear. Fear that requires the need of a sanctuary in the first place. And while Renee’s fear stems a great deal from seeing herself as weak, Kelly’s is the flip side of that coin—she’s just too darn powerful. Renee fears not having control, and Kelly, of course, fears losing it. Renee fears she doesn’t have any power. Kelly fears she has too damn much.

It’s really no wonder why they get along, or why telling Kelly’s story also tells a little bit of Renee’s as well. And fear, my friends, is something that I truly love—it is a destructive love, but addictive nonetheless—and so I need to write about. 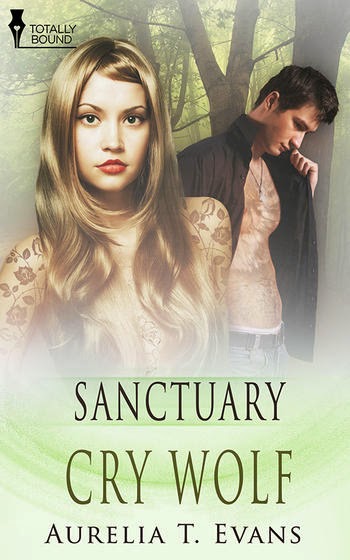 As a werewolf and witch, Kelly belongs to neither pack nor coven, making her a perfect addition to the ragtag collection of dogs, humans and canine shapeshifters at the Chambers Dog Sanctuary.

After recently being transformed against his will, Malcolm—one of the Sanctuary residents—wants nothing more than to shed his werewolf skin and return to his shapeshifter pack. Kelly tries to help him accept his new wolf nature, but then some of the shapeshifters discover Salvation, an organization that claims to cure magical hybrids. Kelly has long since made peace with lycanthropy, which tempers her volatile magic, but when Malcolm begs Kelly to accompany him for one last attempt to resume his old life, she agrees for his sake.

Upon arriving at Salvation, however, the already shaky balance of her life becomes even more tenuous, forcing Kelly to decide which part of herself, wolf or witch, she loves—or fears—more.

Kelly and Malcolm have already had the wild, crazy, naked, woodsy sex with the feral edge that Kelly loves and Malcolm’s getting accustomed to. Now Kelly gets to experience something she’s not used to and isn’t sure about at all—tenderness.

Although she had been unconscious for several hours, she was actually tired by the time she made it to her trailer. When Malcolm stepped out from behind it, she was fully prepared to tell him that she just wanted to go to sleep. Surely he could run on his own.

But he smelled of the forest. He had already been running.

Malcolm took her hands in his, his hands swallowing hers as he leaned down and pressed his lips against hers. As slow and gentle as his kiss, he pushed her up against the trailer. His erection was an insistent bulge confined in his jeans, yet his actions were anything but urgent. His body seared her with the most delicious kind of heat.

When he broke the unhurried kiss, Kelly followed his lips.

He smiled then pulled her closer against his strong, lean body. He used his height to his advantage, standing straight so that she could not reach him. Kelly was dizzy with the kiss. His taste mingled with the whiskey that still hazed her head and coated her tongue.

“What are you doing?” she asked, surprised by the tremble in her voice.

Malcolm put one finger on her lips. “Shhh. I just want to know if I still can.”

He reached behind her and opened the door to her trailer then lifted her up so that they did not have to separate. As soon as they had made it in, Malcolm captured her mouth again, sliding his tongue deliciously over hers. She expected him to bite sharp teeth on her lip, but he didn’t.

He smoothed his maddening hands over her back and thighs through the fabric of her dress. The fact that Malcolm could not stand up straight in the short-ceilinged trailer served as an excellent pretext to bend her over his arms, to take control of the kiss but not dominate. Kelly’s legs grew weaker the deeper he kissed her, but beyond the pleasured mists in her mind was deep-seated confusion she could not articulate.

Butch Cassidy yowled for attention on the kitchen counter. Kelly automatically held a hand out for him to rub his cheek over her fingers.

Malcolm tried not to laugh. He relinquished her mouth to look around for Butch Cassidy’s food container. He poured a little into the empty bowl. Butch Cassidy gave the interloper a glare, but he accepted Malcolm’s gift with a flip of his mostly lame tail—limp from an early injury.

“Where were we?” Malcolm murmured against her cheek.

“I’m not entirely sure,” Kelly said.

“I may be wrong, but I think we were headed to bed,” Malcolm said. He kissed her chastely on the lips before moving less chastely down to her neck.

As his hot, wet mouth did the most sinful things to her neck from ear to collarbone, he unbuttoned the front of her dress. He made quick work of each small, pearly button with surprisingly deft fingers. Again, Kelly kept waiting for the teeth, to feel his canines rake across her flesh and spike the simmering excitement in her blood, but although he bit at her, they were nothing more than nips.

Once he had unbuttoned the dress past her waist, he pushed the sleeves down over her shoulders and let gravity do the rest. Kelly had to let go of him to shed the dress in favor of skin, the long length of pale, inked limbs. The moonlight came in through her bedroom window and illuminated the rumpled bed.

She tingled all over. As soon as she could, she tangled her fingers in his black hair, raked her nails over his back, but he pulled that hand off.

“I don’t understand,” Kelly said, another quaver in her voice. She realized that she was near tears, though she didn’t know why.

“This is how I made love,” Malcolm murmured, twining their fingers and pressing an open-mouthed kiss to the black ink on her sternum. “When I needed it, this was what I did. I need to know if I still can.”

“Just relax, Kelly,” Malcolm said. He flicked the tip of his tongue over her nipple, catching slightly on the bar piercing through it. “Just relax and let me try. Let me take care of you.”

Kelly’s eyebrows drew together, but she combed her free hand through his hair down to the back of his neck and bit her lip, nodding.


Get your own copy of Cry Wolf

Aurelia T. Evans is a hopefully up-and-coming erotica writer with a penchant for horror and the supernatural. She’s had short stories featured in Amber Dawn’s Fist of the Spider Woman, Kristina Wright’s Fairy Tale Lust, and Mitzi Szereto’s Thrones of Desire. Her first novel about shapeshifters, werewolves, and the woman who loves them, Winter Howl, debuted November 2012. The sequel, Cry Wolf, was released February 2014.

A warm welcome to Beyond Romance. When I set up this post, I hadn't read Winter Howl yet. Since then, I finished the book and met Kelly - a truly intriguing character. I look forward to reading more about her.

Meanwhile, I'm not sure I'd agree that Renee is powerless or even if she sees herself that way. She constantly surprised me - and if she'd been the weak, fragile creature she sometimes seemed on the surface, Grant would never have chosen her.

Fascinating series, truly original (something I value greatly in the cookie cutter world of romance)!

I think Renee manages to find her reservoir when she's in the sanctuary, but she is also aware that in the sanctuary she's technically the weakest person in the room on most days. Yet she's also the shapeshifter pack alpha without even trying, which makes for some interesting power dynamics. I do like her very much, in all her unawareness and uncertainty.

Lisabet, could I quote you under my Sanctuary series? I'm asking since this isn't an official review or anything.