Just a few days ago, I returned from a two week vacation in Japan. This was actually my third long visit to that complicated and beautiful country. This time we focused on northern regions, starting in Sapporo on the remote island of Hokkaido and then working our way south to Tokyo.

Japan, of course, has many claims to fame. Sushi. Samurai. Sumo. Geishas. Cherry blossoms. Austere and elegant temples, feudal castles and superfast railways. We've experienced all those things - well, all except the geishas, though we did see a number of women wearing traditional kimonos. Even after three visits, however, I found things to surprise me.

One thing I had not previously realized was how much the Japanese love sweets. When one thinks about Japanese food, the images that arise typically involve raw fish, grilled steak, tofu, rice, vegetables - lean, healthy cuisine. You wouldn't expect to see an ad for a giant cream puff: 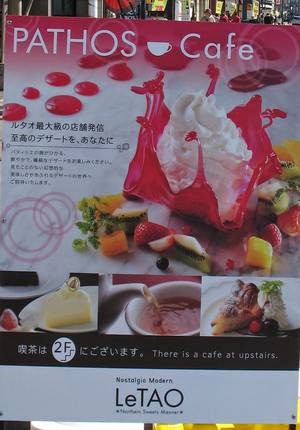 We arrived in Sapporo too early to check in to our hotel, so we decided to look for some lunch. Down the street from where we were staying, we found a pleasant coffee shop. We ordered pizza and beer. (We wanted to be able to get some sleep after our exhausting overnight flight.) It was clear, though, that the specialty of this joint was ice cream sundaes. On either side of us, diminutive Japanese young women were devouring gooey confections topped with whipped cream and syrup.

(I didn't actually take any photos, but the masterpieces our neighbors were consuming were quite a bit more elaborate than the examples below.) 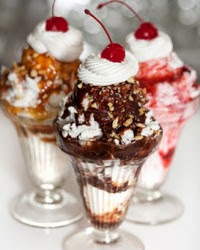 Meanwhile, on the video screen on the wall, the cafe broadcast lurid videos of someone assembling the most enormous sundae I'd ever seen: a huge bowl holding perhaps twenty scoops of different sorts of ice cream, with three types of sauce, nuts, sprinkles, cookies, even those paper parasols you get with tropical drinks. The price for this super sundae? About fifty dollars! Who would shell out that much cash just for sweets? Apparently some people must have. Even the more modest desserts were in the fifteen to twenty dollar range.

Now, I have the opposite of a sweet tooth. I'm probably the only woman you'll ever encounter who could live her life without ever tasting chocolate again. My parents never gave me sweets as a kid. When I was two years old, a well-meaning friend of the family handed me a lollipop and I was totally mystified.

My husband likes sweets a bit more than I do, but still, we hardly ever have dessert of any kind. (I'd rather use my calories on another glass of wine!)

However, indulgence in sugary pastimes seems to have been somewhat contagious. We'd heard that Hokkaido was famous for its ice cream. We had to try it. Twice. Then there was the caramel custard we found in the convenience store - just the right thing after a teriyaki dinner. And cookies - well, I was sampling them in order to decide what to buy for friends back home... Oh, and the cheesecake...

Fortunately, I seem to have recovered from my temporary hankering for sugary foods. I haven't had anything sweeter than fruit since returning.

Normally, when someone mentions pastries or desserts in the same paragraph as travel, one thinks of France, or maybe Vienna. But Sapporo may be in competition as ice cream capital of the world.