[Today I'm interviewing author Jess Faraday about her Victorian era LGBTQ mystery Turnbull House, as part of her tour celebrating the novel's release.  Read on for some fascinating insights into the period and the book. And leave a comment to win your own copy! ~Lisabet ] 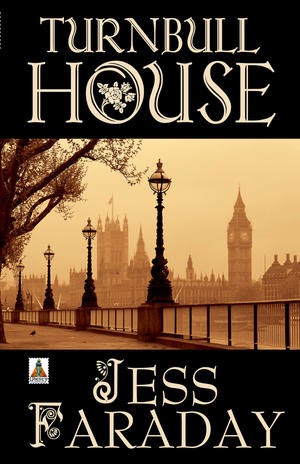 Lisabet Sarai: Greetings, Jess, and welcome to Beyond Romance. I was eager to host your tour because I have a long-standing fascination with the Victorian era. But what led you to set your series in the eighteen nineties? And what was the source of inspiration for your unusual characters?

Jess Faraday: Hi, and thanks for having me! I, too, have always been fascinated with the era. It was such a time of contrasts—an explosion of science and culture, of exploration and expanding fortunes. At the same time, it was a time of shocking inequality, exploitation, and violence.

The first book in the Ira Adler mysteries, The Affair of the Porcelain Dog, started out as an exercise for one of my writers groups. We had to take a character from one of our works in progress, and put them in a completely different time and place. I took a sorcerer’s apprentice from a swords and sorcery story, and put him in a Sherlock Holmes tale. The original story was 700 words long and not very good, but it spawned two excellent characters—Ira Adler and Cain Goddard.

The choice to make them lovers came in part because of research (for a different project—somehow research for one project always leads me to the next one) which turned up the Labouchere amendment of 1885. This law criminalized male homosexual acts (and “attempted” acts, based on the word of a single witness), ostensibly to protect women and children—which made as much sense then as it does now. The similarity of the argument to arguments for oppression of LGBTQ people today—and the success it had—caught my attention. Making the law personal to my main character, I thought, would serve not only to make the reader think about it, but would also heighten the tension and peril for my characters.

LS: How did you research this book? In particular, where did you find reliable information about the criminal underground in the late nineteenth century London?

JF: I consulted a variety of primary sources—interviews with people at different levels of society, photographs, articles from newspapers during that era, and so on. There’s a wonderful book called Lost London, which was written by former detective sergeant B. Leeson, who served in Scotland Yard during the time of Jack the Ripper. It was particularly interesting to research the history of the opium trade and the development of heroin, as both were legal in Britain for quite a while. I got a chuckle out of painting the drug trade as the “respectable” front for Cain Goddard’s truly illegal activities.
LS: Homosexuality was strictly illegal in England during the period of your novel. How do you handle that? What do your characters have to do to hide their homoerotic inclinations? Are they continually aware of the potential consequences of their actions, or do they view this as just another flaunting of the law?

JF: Under the 1885 law, a man could be sent down for two years of hard labor on the word of a single witness who claimed that man had “attempted” an indecent act. This law hangs over my characters’ heads like the Damoclean sword. But everyone has obstacles in their lives, and part of life is learning how to live despite your obstacles.

Ira accepts that he has to be discreet in his liaisons, but also accepts his sexuality as part of himself. He’s not afraid of it, or ashamed. So, while he doesn’t make a spectacle of himself, he surrounds himself with people who accept him, and from whom he doesn’t have to pretend otherwise to keep up appearances. Because people guarded their privacy a lot more closely then than they do today, he wouldn’t feel the need to shout his private activities from the rooftops, and strangers would never think to ask.

LS: One of the challenges in writing a convincing historical novel is to understand the social and cultural differences between your target period and the present. How does Ira's view of the world differ from that of a contemporary gay man in similar circumstances? What is the single biggest area where his world diverges from the twenty first century?

Wow, that’s an interesting question. I can’t give the view of a contemporary gay man (not being one myself), but I can describe some of the differences between my own 21st century perspective and the perspectives I encountered while researching the book.

The idea of sexuality as an orientation rather than as a behavior. In England, the idea of “the homosexual” came about during the Oscar Wilde trials. So, though Ira certainly knew that he only had desire for men, he probably wouldn’t have described that desire as an immutable characteristic of himself, like having brown eyes. A 21st century person would describe Tim Lazarus, Ira’s best friend, as bisexual—a concept that a lot of people still debate. Lazarus would have seen himself as having desire for both men and women, and, being a worrier in addition to a conscientious stickler for the straight-and-narrow path, likely found it quite a relief to fall in love with his wife!

The concept of privacy. People didn’t discuss their private lives as casually, as openly, or as often as they do today. Merely exchanging first names signaled a distinct and significant increase in intimacy. The idea of broadcasting one’s most private behaviors to all and sundry would have been unthinkable—not only because of possible legal ramifications, but because it would have violated strict cultural norms regarding intimacy and disclosure. While many 21st century people think nothing of publicly announcing what and whom they enjoy behind closed doors—or might even consider doing so to be a political duty—Ira would say it wasn’t anyone’s damn business, thank you very much!

London 1891. Former criminal Ira Adler has built a respectable, if dull, life for himself as a confidential secretary. He even sits on the board of a youth shelter. When the shelter’s landlord threatens to sell the building out from under them, Ira turns to his ex-lover, crime lord Cain Goddard, for a loan. But the loan comes with strings, and before he knows it, Ira is tangled up in them and tumbling back into the life of crime he worked so hard to escape. Two old flames come back into Ira’s life, along with a new young man who reminds Ira of his former self. Will Ira hold fast to his principles, or will he succumb to the temptations of easy riches and lost pleasures?

“So,” Goddard said, taking a long sip from his glass. “You never told me why you decided to contact me after all this time.”

“Well…” As I searched for the right words, he quietly set his drink on the polished wood floor. “It’s funny you should—”

The kiss came as such a surprise that I scrambled backward across the divan and almost tumbled over its rounded arm. Whiskey sloshed over the rim of my glass, splashing silently onto the Chinese rug. What remained I belted back in one go before setting the glass on the floor and wiping my shaking fingers on my trousers.

It wasn’t that I was averse to the idea of kissing him, but I really hadn’t expected it. In fact, if I’d seen him start toward me in the first place—he was remarkably quick for a man in his mid-forties—I’d have assumed he was going for my throat.

Goddard chuckled under his breath. “Sorry. Did I startle you?”

I was also taken aback by the presumption. I had always liked it when he took control, and the hard, whiskey-flavored slickness of his mouth had left me aroused. All the same, I was no longer his plaything. Part of me felt as if he should have at least asked permission.

I forgot my objections when he leaned in a second time, slowly, and cupped my face in his smooth, muscular hands. Now that I was expecting it, the kiss felt like coming home after a long, unpleasant journey. For just a moment, all of my troubles dissolved, and nothing existed except his fingers in my hair, the traces of his jasmine and bergamot cologne, and the smooth, familiar contours of his mouth.

And then as suddenly as he had moved in, Goddard pulled back, leaving me confused, disappointed, and blinking in the gaslight and shadow.

I know. I know. But every drop of blood in my head had surged to my cock, and I found myself incapable of the higher functioning required for either diplomacy or deceit.

Perhaps that had been the idea. 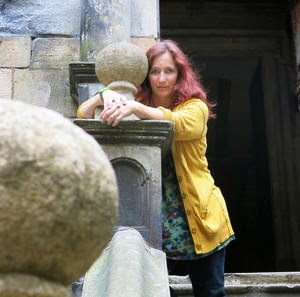 Jess Faraday is the author of the Ira Adler mysteries and the standalone steampunk thriller The Left Hand of Justice. She also moonlights as the mystery editor for Elm Books.

Jess will be awarding a two-book set (paperback) of Turnbull House and its predecessor, The Affair of the Porcelain Dog to a randomly drawn commenter on her blog tour. Please visit http://goddessfishpromotions.blogspot.com/2014/02/virtual-nbtm-book-tour-turnbull-house.html for a list of all the stops on the tour.

I love the interview, definitely food for thought and a learning experience. Thank you for posting. wendynjason04@gmail.com

That book, Lost London, sounds really interesting. That's one thing about the British, they respect history (well, when most of your gross national income comes from tourism it makes sense). I was wondering why Jess went with a series featuring gay men as the main characters instead of heterosexual leads. Also as an editor does she self edit or does someone else give her work a final review. I know I can't edit myself. I read what I expect to read.

Sounds exciting! Thanks for sharing :)

I love mysteries and I have never read these. Adding to my list for my next gc.
debby236 at gmail dot com

I'm looking forward to this. Love the history.

I love to read mysteries. Thanks for sharing your insights, Jess

I've always been interested in seeing the amount of research an author will put into the books they're writing. Thank you for sharing your experience.

I had not realized that heroin was legal in Britain at that time! Fascinating stuff you can turn up in research. This series sounds great.

These two are on my wish list. Thanks for the giveaway.

I'm a big fan of m/m historical books. Have heard some great things about this series. Thanks for the interesting interview.
lgrant1@san.rr.com