For today's snog, I'm sharing a bit of oral ecstasy from my taboo erotica novel  Incognito. 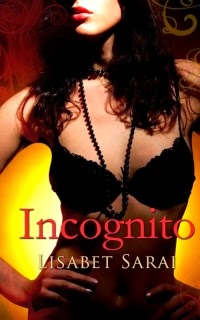 
He did not touch her, but Miranda felt enfolded by his warmth, his scent, his brash, boyish sexiness. His shorts bloomed with an incipient erection. She was suddenly acutely aware of the polished wood beneath her bare buttocks. Her cross-legged position provided an excellent view of her naked sex, she realised, were it not for the table between them. In any case, Mark was not looking at that shadowy space between her legs. His eyes searched her face, trying to read her response. Emotion flooded in her, admiration, affection, gratitude, spiced with a good measure of lust.

She rose, circled the table, and sat down beside him, taking his hand. “I’m more than ready,” she told him. “But since we are playing Truth or Dare here, I have to be honest about what I have been doing the past few weeks.”
Putting aside her embarrassment, she recounted her amorous adventures since their meeting. He knew, of course, of the ménage à trois, and tonight’s kinks. She told him about coupling in the alley with the Japanese businessman from the subway. She described her experiences with Big Daddy’s discipline, her frightening delight at being spanked and sodomized. Wincing internally, watching his reaction, she confessed her risky debauchery on the billiard table. Mark’s eyes widened, but he said nothing.

“Finally,” said Miranda, “this sexual frenzy is intruding into my work life. You remember that day you found me in the library? If you had arrived only a few moments sooner, you would have found me with my fingers in my pussy, grinding away in orgasm.”

“Yes,” said Mark, amusement in his voice. “I knew about that. But these other tales—Miranda, you amaze me!”

“You’re not angry? Or shocked?”

“Let’s go into the bedroom,” gasped Miranda, when she could breathe again. She ached to lay down with this man, to open herself to him.

“I have a better idea,” said Mark. He stood and stripped off his shorts. His erection stood proudly, bobbing in the candlelight. Miranda pulled her dress over her head and tossed it in a corner. The remains of her hairdo disintegrated, ebony locks tumbling over her shoulders.

Moving to one of the windows, he threw it open. Before Miranda grasped what was happening, he stepped through, and held out his hand to her. “Fire escape,” he said with a hint of his usual grin. A thrill passed through her as she understood what he had in mind.

She followed him through the window. A cool breeze off the harbour caressed her bare skin. The wrought iron platform was rough under her feet. She smelled fried batter, rotting fish, incense, anise. A neon sign on a neighbouring roof painted her body in lurid reds and greens.

The apartment looked out on an alley. It was nearly three in the morning. Still, if anyone were to pass by, she and Mark would be completely exposed.

Miranda realised that she loved that thought.

Mark positioned her with her back to the iron railing. “Spread your legs, and hold on.” He crouched before her, gazing at her moist folds arrayed before him. He blew lightly on the delicate flesh. She twitched and trembled in response. “Oh, Miranda,” he sighed, and buried his hungry mouth between her thighs.

There was no tentativeness here, no teasing touches designed to arouse her. In one swift movement he sucked her throbbing clitoris into his mouth and swirled his tongue around it. Miranda’s knees buckled. She forced a fist into her mouth to stifle her moans. Mark ate her pussy the same way that he kissed, forcefully, ferociously, with a single-minded intensity that left her dizzy and weak.

Now he used his hands to open her labia wide. He fastened his mouth on her inner lips, applying a delicious suction as if he were devouring the sweet pulp of some juicy fruit. Meanwhile, his tongue probed her deeply, setting up echoes of his studded cock earlier in the evening. Mark’s saliva felt scalding hot on her sensitised tissues, still inflamed from their earlier battering.

The memory of his leather-clad erection superimposed itself upon the current scene. She felt his tongue grow longer and thicker, until it seemed to fill her completely. She pushed her sex at his mouth, her hips tensing as she tried to drive him deeper. She smelled his sweat, and hers. Faintly, as if in the distance, she heard again the snap of the lash and the ribald encouragement of the audience.

The iron railing bit into her back, awakening the sting of her welts, but Miranda hardly noticed. All thought, all attention, was focused on the glorious play of sensations between her legs. She sank her fingers into her partner’s hair and pulled his face into her crotch. He changed his technique in response, sweeping his tongue along the length of her crevice, from her clit to the tender edge of her rear hole and back. Faster and faster he stroked, while Miranda felt orgasm coiling within her, wound tight, waiting.

The aching need suffused her flesh. Her body was strung like a harp, every nerve stretched toward elusive release. She was so close. It seemed that the merest touch would topple her over the edge, and yet she hovered there, seemingly forever, while Mark plied her sex with fingers, lips, tongue and teeth. Her pleasure was tinged, however slightly, with frustration.

Suddenly, Mark rose from his haunches and stood before her. He brushed her lips with his. Miranda felt stickiness, knew the salty seaweed taste of her own arousal. “Relax,” Mark murmured, cupping a breast while he nuzzled just above her collarbone. “Just relax, and trust me.” Miranda felt something shift at the warm sound of his voice. A clenching in her chest, of which she had not been consciously aware, loosened and then seemed to evaporate. “Give yourself to me, Miranda, all of yourself. Don’t hold back.”