Ladies, I know some of you may not like to wear jewelry, but I do. Here are a couple of famous diamonds that I think are lovely.

This is the largest gem diamond ever discovered. It weighed about 3,106 carats in rough form when it was found in 1905 at the Premier mine in Transvaal, South Africa. It was named for Sir Thomas Cullinan, who discovered the mine. The Transvaal government bought it and presented it to Britain’s King Edward VII. It was cut into 9 large stones and about 100 smaller ones, all flawless. They are now part of the British crown jewels. The picture is a copy of some of the diamonds cut from the Cullinan. 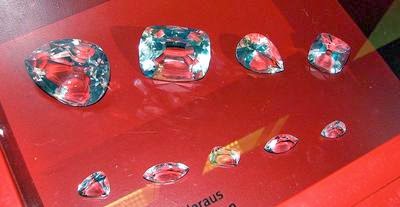 This Wikipedia and Wikimedia Commons image is from the user Chris 73 and is freely available at //commons.wikimedia.org/wiki/File:Cullinan_Diamond_and_some_of_its_cuts_-_copy.jpg under the creative commons cc-by-sa 3.0 license.

This 300 carat bluish-green diamond was found in India. It now belongs to the Russian Diamond Treasury. People say that it was once used as the eye in a statue of Vishnu in a temple in Sriangam. It was stolen by a French deserter in the 1700’s. He sold it to an English sea captain who took it to Europe. Eventually, it ended up in Amsterdam where Grigori Orloff, one of Catherine the Great’s former lovers, bought it and presented it to Catherine. She took the diamond but not Grigori. 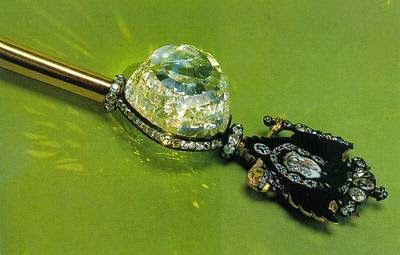 The Hope Diamond is very famous because people thought it had a curse on it. Personally, I think this probably isn’t true, although some of its previous owners did suffer some really bad luck. King Louis XVI and Marie Antoinette of France were both beheaded while the diamond was in their possession, but then again, lots of people got beheaded during the French Revolution. Evalyn McClain, another former owner, wore the diamond as a good luck charm. She wouldn’t even take it off when she had surgery. She did have some family tragedies later on in her life, but I sincerely doubt it had anything to do with a cursed diamond.

If you’re interested in seeing the Hope Diamond, it’s easy to do. The Smithsonian Institute owns it today, and anyone who goes to Washington, DC, is welcome to tour the Smithsonian and look at the diamond. In fact, the museum has a nice collection of gems, including a diamond necklace Napoleon gave to his second wife Marie Louise and a gorgeous red diamond called the DeYoung diamond. Nobody knows exactly why diamonds are red, and they are extremely rare. There are other minerals at the museum as well if diamonds aren’t your thing. 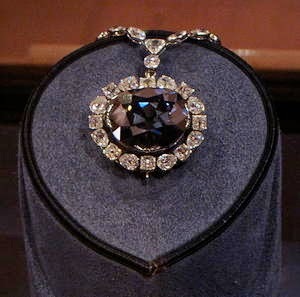 Lots of people are interested in pink diamonds now so I thought I’d include the Darya-ye-Noor, the largest pink diamond in the world. The name means Sea of Light in Persian. The jewel’s pale pink color is among the rarest found in diamonds. It is now a part of the Iranian crown jewels. 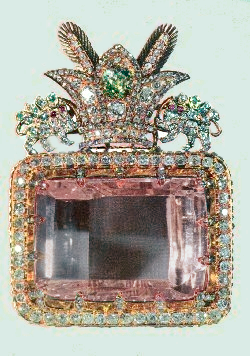 Okay, now that I’ve stopped drooling, I talked about diamonds because my Blue 52 heroine Kathryn Sinclair loves jewelry. In this excerpt, my hero Hank is showing his mother’s engagement and wedding rings to Kathryn who enjoys looking but is clueless as to why he’s doing it. Can you guess? First a blurb, then that excerpt. 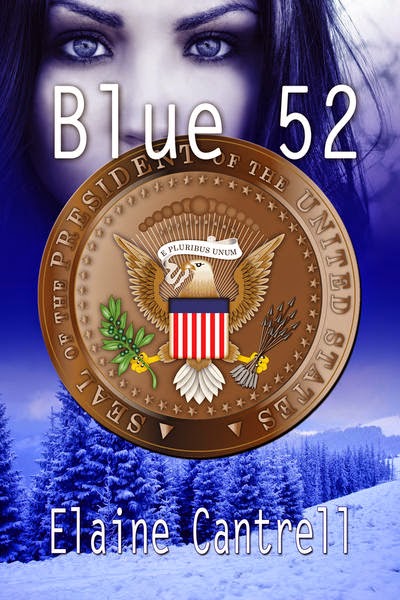 Thirty years later Hank Lovinggood embarks on a quest to prove his mother's innocence and punish the killers who took his family from him. Together Hank and lovely physicist Kathryn Sinclair confront an implacable, twisted, merciless enemy who'll do whatever it takes to hide the truth forever.﻿

Excerpt
Kathryn pushed her hair back and studied the rings. Elizabeth’s engagement ring, an emerald cut diamond, looked about ten carats worth of dazzle. Every available surface on the band was studded with small diamonds, as was her wedding band.

“Hank, I’ve seen pictures of jewelry like this, but I’ve never known anybody who actually owned gems of this caliber. I don’t think pretty is exactly the word I’d use to describe this jewelry. Maybe awesome or dramatic might be better.”

Hank studied her face. “Do you like them, or do you prefer a different style?”

Kathryn laughed and ran her finger across the glittering surface. “Oh, I like them fine.”

“I do too. Grandma told me my mother loved jewelry. Dad gave her some really nice pieces, including these rings.” He snickered. “Grandma likes jewelry too. She used to razz Grandpa because he never bought her as many things as Dad bought for Mother.”

Kathryn handed the box back to Hank. “What else did your dad give her?”

“Oh, all sorts of things.” He put the box back into the drawer. “When he was elected to the presidency, he bought her a ruby ring and a bracelet and some earrings to commemorate the occasion, and when I was born he gave her some emeralds. I was born in May, and the birthstone for May is the emerald.”

“Didn’t he give her a tiara?” Kathryn teased. “It sounds to me as if she was his princess.”

Kathryn grabbed his arm. “He did! When did he give her a tiara?”

“She wanted a tiara to wear with her veil when they got married, so he bought one for her.”

Kathryn threw an arm around Hank. “What happened to her jewelry? Surely, your grandfather didn’t sell it.”

“No, it’s in a vault at the bank, which is where I should put her rings, but with everything that’s happened I haven’t done it yet.”
Hank prayed daily for their mission to succeed, but at the moment, he prayed for something else entirely. He had hoped seeing diamonds and wedding rings would give Kathryn a hint of what he wanted to ask her, but so far, he didn’t think she had picked up on it. He kissed her forehead and gave her a little squeeze. “Will you marry me?”

Elaine Cantrell was born and raised in South Carolina. She holds a master’s degree in personnel services from Clemson University. She is a member of Alpha Delta Kappa, an international honorary society for women educators and is also a member of Romance Writers of America. Her first novel, A New Leaf, was the 2003 winner of the Timeless Love Contest. When she isn’t writing or teaching, she enjoys reading, traveling, and collecting vintage Christmas ornaments

He sounds like a real catch! I don't wear much jewelry, but I might be persuaded to get used to it for a guy like Hank.