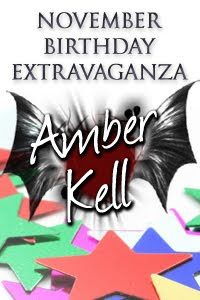 [To celebrate her birthday, Amber has been writing a new werewolf tale and distributing pieces of it all over the 'Net! The final story, when published, will benefit Autism Speaks. For more information, see Amber's blog. ~ Lisabet]

After Fenris’ father picked himself up off the floor the two families sat down for some amazing Italian food. Stanley moaned with each bite. Out of the corner of his eye he saw Fenris wiggling in his seat.

Licking some red sauce off his lips he leaned forward and talked in his mate’s ear. “Are you okay?"

Fenris shuddered. “Could you please hold down the moaning? I’m going to come in my pants.

Stanley gave him a sheepish smile that went straight to his heart. His beautiful Alpha was at heart still a shy accountant beneath all his bluster. “Sorry.”

“When are you introducing Stanley to the pack?” The Overseer broke into their moment and Fenris wanted to growl. His mate’s eyes lit up with amusement as if he could read Fenris’ mind.

“This full moon,” Fenris answered, not looking away.

“No.” Fenris said without hesitation. He didn’t need to worry about her on top of everything else. “We think Sebastian is going to challenge Stanley.”

“Then he’s a fool,” Fenris’ father said, rubbing his throat.

“If you hadn’t had him changed he’d never be in danger,” Millie snapped at the Overseer.

The older man ran his fingers through his hair. “I didn’t have a choice.”

“You always have a choice. You could have said, 'Hmmm. I won’t lead the psycho shifter to my son'.”

“I had to!” The Overseer snapped. “I promised his father.”

The silence at the table was deafening.

Stanley cleared his throat. “My father? You always told me you didn’t know my father.”

The Overseer avoided Stanley’s eyes. “And you still think I’m an honest person after all this? I’ve been lying to you your entire life. Your father was my best friend. Your mother died at childbirth and your father soon after from losing his mate. He made me promise to have you changed and find you a proper mate because although her death killed him, his days with her were the happiest time of his life. You were of the proper age to change and the opportunity presented itself. Your mother didn’t know anything about it.”

Fenris couldn’t even hear Stanley breath beside him. “Why not tell me after all this time? Why keep my father’s identity away from me?” The hurt in his mate’s voice stabbed at Fenris.

“He was a Prime Alpha too wasn’t he?” Fenris’ father spoke up.

Shit! A Prime Alpha’s children were often killed when they were young by the parent’s enemies because some pack members worried they’d become to powerful when they grew up. Fenris gripped Stanley’s hand. “He was keeping you safe.”

Fenris saw the look of raw longing on the Overseer’s face. The man might be a ham-handed bastard but he truly loved his son. Anyone looking at him could see it in his eyes.

“Who was his father?” Fenris’ father asked.

A chill went up Fenris’ back. James had been the strongest alpha born in a millennium. His wife’s death and subsequently his had shaken the werekin community because he was practically an idol in their world.

“I thought their baby had died,” Fenris father said.

“I spread the word of his death because Stevan wanted to give him a normal life. When Millie lost our son it was simple enough to put Stanley in his place.”

Fenris cast a look at his mate. Stanley focused on his pasta with a frightening intensity.

Fenris rubbed his mate’s back feeling the tension in his muscles. “Are you all right?”

Shattered eyes looked back at him. “I don’t know.” He could feel the sorrow emanating from his mate. “If you’ll excuse us, Stanley has a lot to think about.” Fenris needed to get his mate out of there before he broke down.

With a nod to the family, Fenris wrapped an arm around Stanley’s waist and dragged him off. They made it all the way to the pack house before Stanley lost it.

Paul, unfortunately, was the first to greet them.

“I wondered where you two lovebirds had gone off to fornicate at. Did you have fun out in the wild?”

Fenris didn’t even say a word when Stanley chucked Paul through the air like a discus, a crumpled discus that ricocheted off the far wall.

“He’ll learn one day,” Sandy said shaking her head at the pile of wolf lying in an unconscious heap. “He just needs a mate to balance him out.”

Stanley gave a bitter laugh. “Maybe I should just give him to my dad. He thinks he’s a matchmaker.”

“He meant the best.” Fenris rubbed Stanley’s back.

“He still loves you,” Fenris argued.

Stanley marched over to Fenris and wrapped him in his arms. “The only person I’m positive has my best interests at heart is you. You’ve helped me through this entire change.” Fenris moaned beneath the lips of his mate as Stanley licked at his lips, coaxing them apart. “You are the best part of this entire debacle.”

A sound of a throat clearing pulled them apart. “As pretty as you two are together. I don’t think I can handle watching you two go at it without having a serious case of envy.”

“No one gets to see my mate naked but me,” Stanley snarled.

Fenris sighed. With all the other things revealed today he hated to mention that everyone got naked at the full moon hunt. Even alpha mates.
Posted by Lisabet Sarai at 2:49 AM

Welcome to Beyond Romance, Amber - and Happy Birthday!

I hope you get lots of presents, lots of readers, and lots of money to give to Autism Speaks.

I'm so on edge of my seat. Can't wait for and kind hating for tomorrow.

Wasn't expecting that reveal at the family meal.

Awesome!!! I can not wait till tomorrow and then when u release it in a book.
Thank you Lisabet for letting us stop in.

Once again I'll say that I can't wait to meet Pauls mate.

Well that was an interesting revelation. Poor Stanley not wanting anyone to see his mate naked...can't wait for tomorrow.
Thanks Lisabet for having us today and congrats on your release this week.

Hey, do we get Paul's story next? He does need a mate. Ok, maybe Stanley's father isn't so bad. Looking forward to the hunt.

Thanks for another great installment. Looking forward to tomorrow. Poor Paul, he just never seems to learn his lesson hehe.

Another awesome installment! Can't wait to see what happens next.

I can't wait to see what happens at the full moon

HAHAHA A rough conversation for sure on Stan but Fen will make him feel good. Paul is going to meet his mate one day and all hell is going to break lose.

I can't believe it's almost over! Can't wait to see the finale.

I love this story :)

Rocking post but boo hiss to it being the end of november :( I'm just wanting more of Fenris and Stanley ;)
Thx for sharing your site, Lisabet :)

Poor Stanley! He's just been hit with one thing after another :( Thank goodness for Fenris, though!

I can't wait to read about the full moon hunt!

Wow, another great segment! I so love this.

Can't wait to read about the hunt =)

I needed that fix...

Fenris is so understanding and supportive. I want a mate like him.

Ok now I feel sorry for the overseer. It couldn't not have been easy losing your child and bf then raising bf's son..

i'm so loving this story

This is such a good story, I'm totally loving it! Can't wait for tomorrow!

Amber, will you be publishing this?

That should be interesting tomorrow! LOL So when is Paul's story coming out.....LOL

I'm starting to feel a bit bad for Paul, all that tossing around can't be good for his back.

Loved the family meal conversation. You have to kind of feel sorry for Paul. (On second thought never mind) I will say the Full Moon meeting aught to be fun!

I'd though that Paul really needed a mate to temper his personality since the second encounter with him earlier this month...

Another great installment! I can't wait to see what happens when they all change at the full moon!
Ashley A
ash_app@hotmail.com

Wow that was great KD

It's not fair that there are only two more days! :) Love Paul's stupidity.

Can't wait for tomorrow. Really loved this story amber and I'm sorry it's coming to an end. I hope you had a wonderful birthday month.

OH MY GOD *sighs* This is getting sooooo good. I keep hoping Amber will give us another peek after each post.

Great amber.....lisbet thank you for hosting us!

Poor Stanley. So much trauma in so few days. Fenris is a rock.

Dear old Dad's heart may be in the right place but his head has been up his ass. I am somewhat depressed thinking of the end. Like an addict where will I get my fix?

I love how the overseer isn't a bad guy. Even parents get it wrong somehow.

Thanks for letting us come over Lisabet! :-)

Paul must think he is a bird shifter, what with the amount of time he spends flying through the air. (shakes head)

Wow, didn't see that coming. Excited for tomorrow but dreading it as well. Don't want to end.

great story sorry it is almost over

cant wait for tomorrow, but also dreading it cuz it will be the last one til you publish it - it's a really great story Amber!

Great edition Amber! I can't wait for the full moon hunt. So many secrets coming out!! And, it's a good thing Paul heals so easily...LOL.

Thanks for hosting us today Lisabet :)

It's so good. There is so much more that needs to happen. Instead of added to it how about a book#2? ;)

I can't wait to buy this love it!

This is the best story.

Beautiful Installment. Intense.
Excited for the next.

Poor Stanley!! I can't believe that his father could just drop that bombshell out of the blue like that. I hope Stanley kicks some ass!

Love it as always. Stanley is going to need a good fight in order to get some steam out of the system.

Hello Lisabet & Amber,
Thank you Lisabet for hosting Amber & all Us Fans on your Blog today in celebrating Amber's Birthday Blog Tour & Her Wonderful Cause it will Benefit, Autism Speaks.

Wow poor Stanley was sure hit with alot to think about in a very short time & knowing others are going to see HIS Mate naked has just topped it off, Stanley is going to lose it!
Take Care,
Renee' S.
paranormalromancefan@yahoo.com

Aaah we see another side to Stanley's dad. Great addition to the story! Thanks looking forward to the full moon! :)

Okay, I didn't see that twist coming, I love this story.

I love Fenris he is the perfect mate!

And Paul just cracks me up I mean how many times can one be thrown across a room before he remembers his foot belongs on the floor not in his mouth ;) lol