Actually, the current situation is both ironic and funny, for me at least. Last year during this month, I blogged for Lisabet about the concept of feast or famine. I was experiencing a lull in my life, both in my writing and in the rhythm that was working in Sub-Saharan Africa during any season that wasn’t the rainy season. It was a dry, windy, dusty, generally dull kind of time that left me spending a lot of hours lying on my cot and contemplating the overall nature of the universe. Yes, imagine that esoteric joy. What did I wish for? Maybe a little excitement? Maybe something to talk about other than the fact that I didn’t have anything current to talk about?

Let that be a lesson to me! The world has turned, the pendulum has swung back the other way and I now have so much going on in my life that it’s almost impossible for me to parse it out in a palatable way for you, so I’m not going to try. That would be boring, possibly even whiny. Just let me assure you: between getting back to America, getting a job/apartment/car, rolling around with hot, sweaty men on mats (jiu jitsu classes, to clarify for the pervy-minded) and copious amounts of writing, I’ve been busy.

I would describe the situation as a definite improvement, though. Last year I had no new releases in November to talk about. This year, I just published my longest erotica story to date with Dreamspinner Press, titled A Blinded Mind. Funnily enough, this is the story that I spent all of last November writing when I wasn’t counting the threads on the aforementioned cot. It’s a futuristic, semi sci-fi adventure set in a post-World War 3 Europe, but when you read it you can definitely see places where the life I lived in Africa bled into my fantasy world. For those who have read the book, how do you think I became so knowledgeable about the bird scene? Yeah, done that. Life really does inspire art. For those of you who haven’t read the book, maybe you’d like to! Here’s the link to my book at Dreamspinner Press: http://www.dreamspinnerpress.com/store/product_info.php?products_id=2587.

Last year I had a good excuse for not having an awesome website. This year I don’t, so much, but I do still have a blog and all sorts of good stuff happens there, including a lot of free fics, occasional contests and plenty of links to all my work. I love hearing from people, particularly people who have something to say about writing or something to share about travelling. And while my website isn’t solid gold, Lisabet’s is, and so I thank her on bended knee for the opportunity to blog in this beautiful space again. The synchronicity of it makes me smile. If the timing works out, who knows what I’ll be talking to you about next November?

Meanwhile, here's a snippet from A Blinded Mind for you to enjoy. 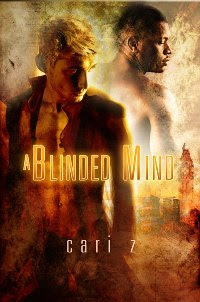 “You’re thinking way too hard,” Sam grumbled in Jonathan’s ear as he shifted around on the cot, trying to find a position that wouldn’t irritate his already irritable upper back. “I can’t sleep when you think like that.”

“Well, I can’t sleep when you roll around the bed like a ball,” Jonathan replied. “And you can’t hear my thoughts. You don’t know what I’m thinking.”

“I can see it on your face,” Sam said gently, finally finding a position that would do for a while. “What’s wrong?”

“If you say so.” That was one of the nice things about Sam. When you didn’t want him to pry, he didn’t pry. Of course, that wasn’t a virtue when Jonathan suddenly realized that he really did want to tell Sam what was wrong.

“Are you going to change your mind?”

“Are you going to change your mind? About me? I understand if you will. I did force you into this situation, and I don’t deserve your sympathy, but….”

"Will I change my mind about leaving you be when I’m healed up, or about sleeping with you right now?” Sam asked.

“I haven’t done a good job of convincing you of my sincerity,” Sam said easily. One large, strong hand reached out and began to stroke Jonathan’s chest, rubbing in soothing circles right over his wildly beating heart. “That’s my bad. I’m used to being taken at face value.”

“And I’m used to verifying everything by swimming through people’s heads, so if anyone’s to blame for lack of clarity, it’s me,” Jonathan sighed, relaxing under the touch. “It’s a rude habit to have developed. I never did it when I was with PsyCo.”

“You’ve got a lot more to worry about out here than hurting someone’s feelings, Jonnie. It’s no problem clearing the air.” Sam’s hand slowly moved south, smoothing over ribs and onto the skinny, hollowed planes of Jonathan’s abdomen. “I’m not going to do anything to give you away when I go. I don’t want you back in the Bureau’s hands, not knowing what you can do. You’re scary talented, man, but you do a good job of regulating yourself. I don’t think you’re about to try and take over EuroCo or assassinate hapless civilians or anything like that. I worry about leaving you alone more for your sake than anyone else’s. It’s still a fucking war zone out here.” His fingers clenched briefly before continuing their rhythmic caresses. “Lots of shit could happen to you.”

“I did fine for ten years before you came along,” Jonathan reminded him, defending his pride even though the thought of being alone again did make him feel unsettled, and not just for reasons of safety. He was getting dangerously used to company, good company, someone he actually enjoyed, someone he… liked. Yes. Liked.

“I know,” Sam agreed. His face was relaxed, but his eyes were very serious. “I know you can handle yourself. I’m living proof of that.” His mouth quirked in a half smile, taking away the sting that came with the reminder of what Jonathan had done to him. “But that doesn’t mean I can stop myself from thinking about it. As for the other worry….” Sam changed tacks quickly, his smile becoming full and genuine and more than a little lascivious as he leaned over Jonathan and let his questing hand slip further down, over hips and under cloth until his fingers ghosted against needy flesh, teasing ruthlessly. He kissed Jonathan, his lips staying soft as his grip became harder, and Jonathan reached his arms around those broad shoulders and tried to make Sam be closer, faster, harder, anything.

“As for the other,” Sam said breathlessly when he pulled back a few moments later, “I think the pros totally outweigh the cons sleeping with you. Don’t you?” They kissed again, and Jonathan carefully pulled Sam on top of him, mindful of Sam’s wound but hungry for him, for the warmth and the weight and the feel of him holding Jonathan down.

Bio: Cari Z is a Colorado girl who loves snow and sunshine. She just got back from two years of living in West Africa and is still delighted by the magic of hot running water and the glory that is Wi-Fi. Check her blog for info on new releases, upcoming projects, and works in progress at http://carizerotica.blogspot.com.

You can contact Cari at carizabeth [at] hotmail.com. In fact, please do. She’d love to hear from you.

Welcome back to Beyond Romance. Obviously your life has changed radically in the past year, but it sounds as though it's mostly for the better.

Good luck with The Blinded Mind. I really liked the excerpt.

Hi Cari! Of course I had to come on over to Lisabet's blog to say hello! Since you are promoting 'A Blinded Mind' here (and since I have read it) I also wanted to be sure to let all of Lisabet's readers know that they should definitely buy the book. I enjoyed it and would highly recommend it to all!

Glad your transition back into American life has gone pretty smoothly! As a regular reader of your blog, I've noticed that things have definitely picked up since you're been home. I can tell there are exciting things on the horizon. Keep up the good work!

Hey ladies! It's me, my computer is just being weird about letting me post.

Thanks for the lovely thoughts from both of you. Hopefully things will be picking up, faster and better, as time goes on.