It's Sunday once again, and that means it's time for snogging! This week I have a quick kiss from my upcoming paranormal release Hot Spell, due out a week from Monday. You can win a free copy, too. Just comment on this post or any of my guest appearances between now and the end of the month! 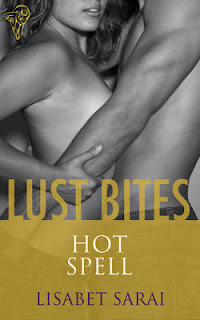 The flames of passion are more than metaphor.

He came to her in dreams first, conjured by the sweltering night.

Naked, she tossed in her sweat-damp sheets, drifting in and out of uneasy slumber. The muggy air settled on her skin, a stifling blanket she couldn’t kick off. Like a physical weight, humidity pinned her to the mattress. The feeble breeze coming through the open window offered no relief. If anything, it was warmer than the air in her bedroom, carrying with it all the heat that had been trapped in the concrete and asphalt during the day.

Her limbs were leaden. A dull ache pounded behind her forehead. When sleep overtook her, she found herself wandering barefoot on empty, baking sidewalks. The sun’s relentless glare reflected down upon her from the glass-walled towers on either side. Rivulets of perspiration trickled down her spine but failed to cool her. Her skin felt scorched, ready to crack and peel.

Then the dream changed. The oppressive brightness faded to sultry shadow. Flesh, not air, weighed upon her. Smooth, hot skin, slick with sweat, slid against her own. Strong legs tangled with hers, easing her thighs apart. Fingers of fire skittered across her breasts and danced in her sex, kindling incendiary pleasure. A scalding tongue licked its way to the hollow of her throat, then returned to seal her mouth with a steamy kiss.

He tasted of mulled wine, melted chocolate, cinnamon and cayenne. A sharp tang of ozone hung around them—the smell of summer storms. Lightning crackled wherever he touched her. She ran her hands down his muscled back to his firm, full buttocks, marvelling at the power she sensed in him. Her palms tingled and stung at each contact, as though she’d been slicing chillies. The strange sensation added to the pleasure simmering in her pussy.

She pressed her fevered body against his, trapping his erect cock between them. Hard against her belly, his rigid organ felt like a bar of steel fresh from the furnace. Every searing instant made her want him more. They writhed together, sparks of scarlet and gold whirling around them. Her clit was a live ember. When he brushed his cock over the swollen nub, she burst into flames.

Posted by Lisabet Sarai at 3:02 AM

I love how descriptive this passage is, thanks for the peek!

Wow, *fans hereself* it's all about the heat. Everything has to do with hot. Great descriptions. :D

Brilliant. One of the very best I have read. Well written, with style and intelligence. I have spent hours looking for erotica like this. Resorting to writing it myself.