I sadly was unable to attend the recent EAA conference held in Las Vegas (I'd only heard of it a couple of days after prebooking -and paying- for a family holiday for the same week...), so when the opportunity arose to travel to its European equivalent, I jumped at the occasion.

The first ever Un Po di Eros Festival was held in Zibello in Italy over the week-end of the 8th and 9th October. Zibello is a beautiful, if somewhat sleepy little town, on the Po River, just a half hour from Parma. The event was organised by local author Rosalba Scaglioni whose writes her erotica as Liviana Rose and who, with her parents, owns and runs one of the most famous restaurants in the region, the Leon d'Oro. 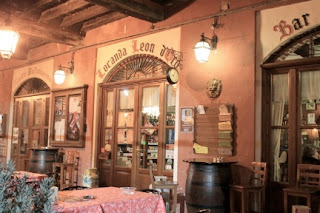 Sadly, Francesca was badly mugged in Milan a few days before the Festival and had to cancel her appearance at the last minute, which was sad as I have known her for some years (and published some of her stories in my Rome Noir and the forthcoming Venice Noir collections from Akashic Books) but we've never actually met. The author of twelve novels, most of whom are intensely erotic and personal, she, I think, is a major talent. Fausto, on the other hand, was ubiquitously present, a jovial character who reminded me of the similarly ebullient crime writer Giorgio Faletti. His art adorned the walls of the both the theatre and the grandiose steps leading to the auditorium, a subtle combination of painting, photography and objets trouvés, quite unlike any other.

Zibello, as I found out, is known throughout Italy for its 'culatello', a much sought after variety of smoked ham, the slightly sweet flavour of which is very different from the traditional Parma ham. Needless to say, culatello was on every menu and part of every meal we were treated to at the Leon d'Oro and elsewhere. Sadly, the outstanding local wines which flowed throughout the week-end, were lost on me, as I don't drink!

One of the highlights of the week-end (in addition to the lively 'aphrodisiac' banquet on the Saturday evening) was the annual presentation of the Oxe Awards. These have been going since 2005 and are an extension of the main Italian erotica site eroxe.com which is run by, amongst others, the ever present Dante Bernamonti who writes and edits as Faber Zerotre and acted as Master of Ceremonies, with awards being given out to best short story of the year, best male and female characters, etc... One of the more striking winners was a lady who calls herself Heathcliff, whose stories invariably feature male characters only!

Like so many European events, this was not just about literature but much free time between events to encourage the mingling of writers and readers, conversation, drinking and a lot of eating! And a lot of lasting friendships were made.

The festival will be an annual event and I can encourage all of you to bear it in mind for the future. Even though I do speak and understand Italian, my own event/reading was in English (there were interpreters) and anyway almost all the Italian writers and fans present could understand English.

Parma Airport is served by mostly budget air companies and the hotel/B&B prices in Zibello are well under $50 a night.

As part of my own event, I read the second half of my Molly Bloom story from the Sex in the City: Dublin anthology, with a specially selected backing music score. It went down well; so well that, the following day, halfway through the final closing outdoor party with tables full of thin slices of culatello and the wine flowing, I was taken aside by a woman who had been in the audience the day before, who, red-cheeked, confessed that she had had a vivid and abominably erotic dreams that night in which I featured prominently! Taken by surprise, I fear I did not come up with the right words or response, and queried whether it was in fact my story or me as a person who had elicited such thoughts! We were then separated by the busy crowd before I could gather myself and matters did not go further. Did I behave badly in that erotic dream of hers? I will never know. But then, the lady in question, albeit Italian, was so different from Ekaterina, the bittersweet heroine of my new novel Ekaterina and the Night that it was easy for me to hold back. You see, when it comes to falling in love I am sort of monogamous, and can only love one Italian woman at a time!

You wait your whole writing career for a bona fide groupie and she appears at the wrong time!

But at least the food at Un Po di Eros was sublime!

Blurb for Ekaterina and the Night 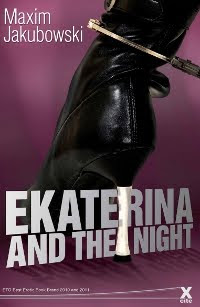 When a mysterious angel of death who calls herself Emma enters their lives, Ekaterina and Alexander know their days together are numbered.

A shocking climax set in Venice in winter brings the three protagonists together.

A tale of sex and tenderness that ranks alongside Jakubowski classic The State of Montana.

You can buy Ekaterina and the Night from your favorite online booksellers:

Paperback (available in the US slightly later than the UK)

Courtesy of Xcite Books, during my blog tour, three lucky winners will receive a copy of Ekaterina and the Night in their choice of paperback or digital format. (International entries welcome)

Simply leave a comment on this post to win. Be sure to check out the rest of the posts in the tour, because the more comments you make, the more chance you have of winning! Go here to see the blog tour schedule.

PLEASE leave your email address in the body of the comment. No email address = no entry. Winners will be drawn and contacted on the week ending 11th November 2011.

Wow, that would be so neat to go to Italy for a conference. I have been to Italy and found it wonderful.
Debby236 at gmail dot com

Would that I had the time and money to attend, Maxim! It sounds like a fabulous conference.

Thanks for being my guest - I hope that Ekaterina brings you fame, fortune and pleasure.

How incredible to go to Italy but then to attend a conference on top of it!!!

Thank you for the givewaway!

Great post! And Italy sounds wonderful...I would LOVE to go there someday. Oh, my...a groupie, and a BOLD one at that...I don't even know what to say...but, I'm grinning!

I hope your friend Francesca is going to be all right. I do see a trip to Italy in the next two years, will have to see how close Parma is from the ferry that runs from Corfu to Italy. I will keep this conference in mind. As for your bona fide groupie, the good thing about dreams is she can call you up anytime, and do with you what she will without hurting anyone's feelings :)
Best wishes to you on your exciting new release! :)