You're Never Too Old for Romance

Stories come from so many places. Usually, mine develop from a character who shows up in my head with a tale to tell, and most of the time, accompanied by a title and an entire roster of cast mates. However, my latest release from Muse It Up Publishing came from someone else.

My high school friend, Caryl, and I reconnected several years ago…in a mall of all places. We’ve kept our friendship alive with emails, Facebook posts, and phone calls, and enjoy sharing out lives’ happenstance with one another.

On one particular night, Caryl, who is single and has been for a number of years, called and shared her excitement at meeting a handsome older man in a shoe store. Since it hadn’t been that long since my divorce and remarriage, I remembered how we old gals can still get butterflies. While men can chase younger women, if we dare look at someone our junior, we suddenly become cougars. Trust me, if I wasn’t married and looked a little more alluring, I’d choose being a cougar over fishing in life’s throwback pond. I’ve already been there, done that, and I’m so fortunate that out of all the castaways, I happened to find one that is a treasure. His ex was a dope, or my last nerve he’s hanging on is a lot stronger than any she had, but I digress as usual.

That night, an idea for a story came to me, but not from a character, but from my friendship with Caryl. I imagined how she felt, meeting someone who might turn out to be more than a friend. I used my emotions with her story, and of course, the title, Just The Right Fit, materialized and is most appropriate. There aren’t a lot of romance stories out there with older heroines, but this is my second. Luckily, Muse It Up Publishing had just opened their “Persephone” line, which calls for a more mature leading lady, so… I’m not sure why Persephone, the goddess of the underworld who is usually depicted as a young goddess holding grain sheafs and a flaming torch, is appropriate for stories about older broads, but I’m not asking.

So now that you know the story behind the story, I’ll thank Lisabet for allowing me to visit on her blog today and share a sample. Hope you enjoy: 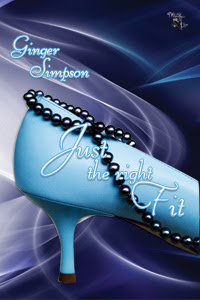 When Carolyn Sloane walks into her favorite shoe store, she’s pleased to see the display isn’t limited to sandals and pumps. The new, handsome salesman is a tantalizing addition for an older, single woman, and she’s bound and determined to catch his eye. Is he divorced, married, gay? Carolyn wants something besides a pair of shoes, but who’s the woman he’s escorting from the back room, and why does he have his arm so snugly around her waist?

“May I help you?” The timbre of his voice matched the broadness of his shoulders and made her jump. His tall silhouette blocked the light filtering through the front window, and her dipped chin seemed frozen in place.

She forced her head up. “Y-es, I-I…” The words she sought lodged behind a lump in her throat.

“I assume you’re holding the shoe you’re interested in.” His smile dimpled his cheeks and displayed white, even teeth. An air of charisma hung about him while she felt caught up in a bubble of ridiculousness.

She forced a smile and with trembling fingers, handed him the shoe. “Yes, size seven please.”

Why in the world did this man have such an effect on her? Could the draw be the splashes of gray at his temples? It couldn’t be the slight limp she detected when he walked through the curtain to the storeroom. But there was something—definitely something. She thrummed her fingertips on the chair’s arm and fidgeted in her seat, waiting for his return—almost dreading the feelings he stirred and unsure how to handle them.

“Here we go.” He appeared through the split material in the doorway with a beige box bearing the familiar logo of the footwear she’d learned to love. With one hand, he hiked up his khaki slacks before kneeling in front of her. He removed her left shoe, his grasp warming her heel when he slipped off her worn pump.

The personal service kept her coming back to the store. Almost no one waited on customers anymore—especially clerks this yummy. She fanned her fingers across her heated face and fixed her gaze on the top of his head, noting he still had plenty of dark brown hair—not even a bald spot. The man was definitely eye candy, and she wasn’t on a diet.

While he slipped on the other walking shoe and tied the laces, Carolyn searched his left hand for a wedding band. His naked finger caused a little squeal to bubble in her throat, but it quickly slid back down when she considered he might be gay. That would be just her luck.

“They look very nice. How do they feel?” He stood back and flashed that selling smile—anything for a sale, she supposed.

“F-fine.” She jutted her legs out and stared at her feet. “I like them.”

“Perhaps you should walk around the room.” He offered his hand and helped her stand. “Make sure they don’t pinch those pretty little toes.”

She hadn’t had tummy butterflies in ages, but he set a flurry loose with a wink of his azure eye. The touch of his palm sent an electric jolt up her arm, and her benign attraction to him turned terminal. Could she sashay across the floor in tennis shoes and a skirt and still look alluring? She craved perfection in his eyes.

Well, that’s all I’m sharing with you. If you want to know how the story turns out, you’ll have to buy Just The Right Fit. Like I said, you can find it at Muse It Up Publishing, (http://www.museituppublishing.com), probably on sale as a new release. And, when you have time, I’d love to have you stop by Dishin’ It Out (http://mizging.blogspot.com) and see what’s cookin’ on my blog. I just started a second one, Cowboy Kisses (http://cowboykisses.blogspot.com) for those of you who enjoy western romance. You can mosey on over there, too, if you’d like.

Interesting post! It is serendipity that leads to the most amazing things. Thanks for sharing and the excerpt was great.

Welcome back to Beyond Romance, Ginger!

I love the idea behind this story. There's no age limit on love.

Thank you, Lisabet, for sharing your blog with me today. I really enjoyed writing Caryl's story, although in real life, there wasn't the HEA we all hope for. Thank goodness for fiction where we can create them and keep hope alive. :)

I am with you, Ginger. I may be numpti three but if Enrique Iglesias were to fall into my lap {interesting visual} I would shed those years faster than Scottie could beam me up. Love the cover, btw.

Excited to see this side of your amazing writing abilities. Very, very intriguing. I agree about the cover...love it.

Oh Ginger, what an exciting, romantic story. Since hormone replacement, we are going to see more of these romances come true. Especially with testosterone replacement, which is as important for a woman as for a man. The best to you Ginger, as you are the best.

Great blog Ginger,
Love the sound of your new story. I do believe us old gals deserve to have our stories written and why shouldn't we be heroines, too?

Great stories, Ginger. Both the real and fictional one. Thanks for sharing.

Enjoyed the post and Excerpt. My sister is going through something similar...the guy she's crazy about is at least 14 years younger than she is. His dad isnt happy about the situation. I think she will enjoy reading your book, Ginger.

Reminds me of my book, Meander Scar, where I tried hard to stay away from the cougar theme and go for genuine love between a woman who's husband is missing and the young lawyer who tries to help her. LisaLickel.com