Ask someone to list common kinks, and you’ll usually hear the same answers over and over: domination, submission, exhibitionism, pain play, fetishism (of objects such as high heels, corsets, stockings, etc), cross-dressing, or other responses in that vein. The more adventurous may well list things like “adult babies”, macrophilia, sissification, water sports, or “puppy play”. But there’s some kinks that I rarely hear people discuss, and that’s because those kinks refer not to concrete objects or acts, but to concepts.

I started thinking about this a few weeks ago when I was chatting with a friend. We were discussing the publishing company I co-founded, Freaky Fountain Press. (FFP is, as one reviewer affectionately referred to us, “the dark alleyway of erotica” – we publish all the unconventional things that tend to leave mainstream publishers cowering. Part of the reason we do this is because we want to take away the stigma of being into the freaky side of sex, and show people they aren’t alone in their darkest desires.) My friend listened to me talk about how society is doing people a disservice by stigmatizing these kind of fantasies, and then she commented, “But what about the people who get off on stigma? You de-stigmatize everything, they won’t have anything left. When everything is mainstream, nothing is hot.”

I can’t say I agree with all of my friend’s comment, but I see her point. For some people, it isn’t the act itself that’s sexy; it’s that the act is forbidden. The kink is transgression itself, and the sexual practice used to transgress is secondary. If washing clothes on Tuesday was a widespread taboo, these people would be doing their washing in broad daylight on Tuesday afternoon, their crotches getting more wet every time they hung another shirt on the clothesline.

Many activities that were once wildly transgressive have now entered, or are entering, the mainstream. Floggers and paddles can be found even in the most innocent, couple-friendly sex shops; there are reality TV shows focusing on drag queens; shibari has been used in art shows; even The Simpsons had an episode on outdoor sex. Yet there are still some things that are far from reaching mainstream acceptability. Despite Lady Gaga’s best efforts, the fetishization of religion is one of those. 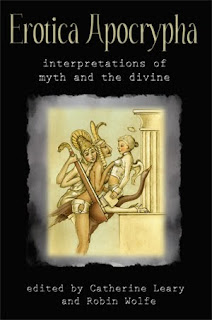 The power of the religious kink comes back, once again, to transgression. Judeo-Christian religions are very heavy on controlling sexuality, at the risk of eternal damnation. What could be more transgressive than discovering or emphasizing sexuality within the religious texts themselves?

“You may ask anything of me, young Joseph.”

There was another shiver of delight. I say shiver, but it was more of a quake. I felt it in my back and my chest and my loins.

I reached for him before he could rescind the invitation, cupping the bottom of his foot as delicately as one might cup a bird with a broken wing. I exhaled, my warm breath bouncing off his flesh and back to my lips. How was he solid? I didn’t understand it, but I couldn’t deny it. I was holding him while the light streamed over me, illuminating my skin and nails and every mortal imperfection I possessed. I wanted nothing more than to be pure in that light, but where it touched me, it showed only endless flaws. I wasn’t worthy to kiss this beautiful, divine being, even if he offered me nothing except the top of his foot.

My lips brushed him, and I thought of kissing a flower petal. I thought of kissing a cold stone. I imagined burying my face in a rushing river, sticking my tongue out to catch the snow, napping in the sun on a Sunday afternoon. I thought of the girls who let me kiss them and finger them under their skirts. The way their flesh folded so sweetly over my curious fingers, and the way they throbbed and writhed and begged me to stop while they gripped my hair and pressed my face between their legs. Desire stabbed through me, hot and sharp as a sword piercing me from shoulder to groin. I hardened, my manhood jutting from beneath my sleeping gown. I had only received permission for one kiss, and so that was all I dare take, but I let my mouth linger. Even when I had to take a breath or risk passing out, I couldn’t force my head up.

“Joseph.” The love in his voice was undeniable now. How could he love me? Did he not know me?

“I’ve sinned,” I whispered. “I’m not worthy to receive His message.”

“You’ve been chosen to bear this burden. He loves you that much.”

“I’m unworthy,” I repeated, my groin stirring even as the tears splashed against his feet, my lips not quite touching him. I inhaled deeply, longing to absorb his essence. “Make me worthy. Please.”

I released his foot finally and fell to the floor again, my brow touching the cool wood, my spine bowed in supplication. I’d experienced carnal desires many times before, and perhaps I had indulged in those carnal desires too many times. Perhaps I was far too physical to be used as a spiritual vessel, my flesh too solid, my skin too sensitive and my mouth too eager to find pleasure in new textures and tastes. But simply prostrating myself at Moroni’s feet provided more vexing ecstasy than a lifetime of languid afternoons with the dairy maids.

“You must submit to your God, Joseph. Body and soul.”

Robin Wolfe is the co-founder of Freaky Fountain Press, a small publisher of literary erotica dedicated to exploring the dark and freaky. Come dance in the Fountain at http://www.freakyfountain.com.

Posted by Lisabet Sarai at 2:19 AM

Welcome back to Beyond Romance, Robin, and thanks for the thought-provoking post. I do think that the forbidden nature of some acts is a large part of what makes them hot.

Much looking forward to this version of the Apocrypha!

I've always thought the Bible left out a lot of details in some of the more intereting stories. Sodom and Gomora, Song of Solomon, Bathsheba, Samson and Dehlila, (excuse my spelling, no time to leaf through the book to check.)This sounds like a most interesting book. Good post.

I've written or co-written a few religion-based erotica, from Christian (Redemption and Sacred Places) and Pagan (too numerous to list here!). I've never considered it an especially wild taboo, although I expected to get a little flak for the Christian-based ones. Not a peep, however!

Personally, I have a real soft-spot for blasphemy.