Where Does Reality End...?

The question that erotica authors are probably asked the most is 'Have you done all the things you write about?”

And I've never worked in an office either - but I don't think that's what people mean when they ask the question!

Temporary Insanity is my latest release and it involves two guys, a girl and an office sex bet. I am afraid I have to admit that not only have I never worked in an office, I've never had sex with two men at the same time either. However, I have an imagination and that is where my story ideas come from.

Here's an excerpt from Temporary Insanity for you to work on. Where do you think reality ends and imagination begins in this scene? 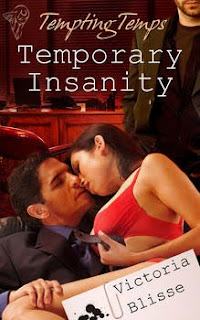 I was in my usual place when next I saw Connor.

“Thought I might find you here,” he said as he walked into the copier room.

I shook myself out of the sexual fantasy I had been creating in my head and smiled at him. “Have you got something else for me to do?”

“Certainly,” I replied and dropped to my knees before him. “I've wanted to get my lips around you since we first met.” I yanked at his zip until it released, then popped open the button. No underwear presented itself underneath.

“Matt likes me to be easily accessible at all times,” Connor explained after my gasp of delight. “And I do like going commando.”

“No complaints from down here either,” I added and I traced my fingers along his quickly thickening member. I was amazed by how fast it filled out, eager and straining for release.

I wasted no time, aware of the open door and the corridor outside. I opened my mouth wide around him and eagerly whipped my tongue around his dick, savouring the feel and the fresh, light masculine taste of him.

His moans and gasps were delightful. He pulled my hair from its confining clip and grasped handfuls of my mahogany curls as I eagerly bobbed up and down his thick shaft.

I stroked his tightened balls and squeezed gently whilst I worked as much of his cock into my mouth as I possibly could. When his grip tightened in my hair, I knew he was close to coming.

“Have you finished those yet?” one snapped.

“I am just on the last batch now,” I replied.

“Okay, well, Andrew has sent you this lot to do next, so step to it.”

“That's no way to talk to a lady, Nigel.” Connor tutted. “I thought you’d been brought up better than that.”

“Oh, didn't see you there, sir. Sorry sir, sorry…new girl, but Andrew is eager for those and he’s in a foul mood.”

“All right, no problem. I'll get onto them now.” I nodded. The guy was only doing his job, after all.

“Come on, Tom, we better get back to those spreadsheets.” Nigel bustled out of the room with his friend and I offered my thanks to my blond defender.

“Thanks,” he whispered as he walked past. “You give a first rate blow job.”

I blushed and he laughed. I'd been spanked, licked and sucked cock and it wasn't even lunchtime. What a wanton woman I had become!

Thanks for hosting me, Lisabet, it's been fun!

Hot excerpt. I do think it is personal to ask that question. Nice way to approach it. Great job!
debby236 at gmail dot com

Great scene - but I do wonder when Connor managed to get his cock back into his pants...or maybe Nigel just didn't notice it was still out...!

Good luck with the release, and thanks for livening things up here at Beyond Romance.

I've worked in plenty of offices and often that was the only thing that got me through the day, sexual fantasies. Nice excerpt!

Lisabet - I wouldn't put it past Nigel not to have noticed. *LOL* Thanks for having me. :)

Naomi -Glad you enjoyed the excerpt!