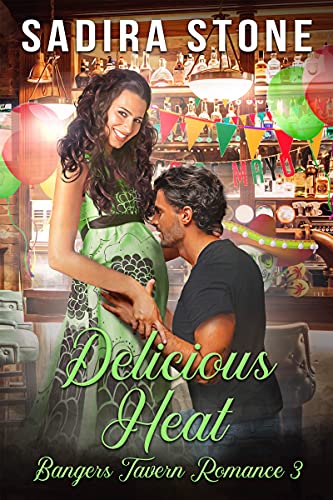 Diego Vargas dreams of running his own business, utilizing his impressive culinary talents. Step one will be his food truck Empanada Angel. Meanwhile, he works as a chef at friendly, offbeat Bangers Tavern, rustling up outrageous riffs on the bar’s signature tater tots and saving money toward his goal. The youngest son in a traditional Hispanic family, he’s trying to shed his reputation as “flaky” and show his parents and siblings that he has what it takes to succeed.

Anna Khoury’s life just took a nose dive. First, she discovers that her selfish, narcissistic husband has been cheating on her with his secretary. Days after kicking him out, she learns that she has accidentally become pregnant. Anna is equally determined to keep the baby and to ditch her ex, though she knows she’s in for a rough ride as a single mom. Her best friend Elena Vargas, who has raised a toddler on her own, warns Anna almost daily about the life she’s choosing.

For both Diego and Anna, falling in love would be a huge complication. But you can’t argue with fate. Diego catches sight of the pretty nurse when Anna drops by Bangers to visit her waitress sister Charley and is immediately smitten. Given the issues she’s handling, Anna is justifiably wary of his interest, but his sweet attention, honest friendship and impressive patience quickly win her over. Their physical attraction and emotional compatibility sustain them as they deal with resistance from both their families, as well as various nefarious efforts by Anna’s stubborn ex-husband to undermine their relationship. As Anna’s due date draws closer, Diego tries to reassure his beloved that he’s ready to be a father – if she’ll let him.

I’m really not a romance fan. All too often I find books in the genre to be wildly implausible, totally predictable or both. However, I’m always ready to take a chance on one of Sadira Stone’s stories. Her characters are quirky and unconventional, people cut out of whole cloth with histories, families and quite often a strong ethnic identity. Furthermore, the secondary characters are often as memorable and entertaining as her protagonists.

Her plots feature realistic conflicts that center around trust, insecurity and unfortunate social expectations – not kidnappings or secret sex clubs or indecent bargains with billionaires. Of course I know that the hero and heroine will eventually find their way to a happy ending, but the process is satisfying in itself. I feel a little silly saying this, but her stories leave me with a happy glow.

Delicious Heat has all of the above qualities. Diego’s and Anna’s relationship develops gradually, each of them hesitant due to the complexities in their respective lives. Friends and siblings interfere, though they have the couple’s best interests at heart. Banger’s Tavern, with its colorful cast of employees, provides a lively, vivid backdrop for the action. This is the third Banger’s Tavern novel; I’ve read them all. It’s fun to meet up again with people who were at the center of the earlier books, indeed, to see events from those books from other characters’ perspectives.

Finally, I have to mention the secondary character of Diego’s grandmother Marisol Vargas. A feisty, straight-talking ninety year old, she’s the only one who has faith in the young chef and trusts his judgment in choosing Anna. Meanwhile, Diego tries to protect her from the well-meaning but misguided attempts of his family to move her out of her own home into an institutional environment. As I age, I  appreciate fiction that treats older characters with affection and respect.

I really enjoyed Delicious Heat. Meanwhile, most of my readers are far more enthusiastic about romance than I am. I think they’ll love this book.

:) A happy glow is never silly - we need as many as we can get! Great review.

I'm in the middle of reading this now. And you're right--it's a great series! Realistic characters, true love, and feisty abuelita? I'm in!