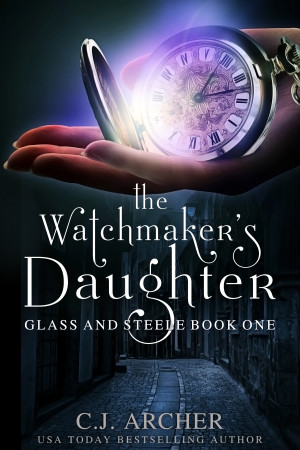 The Watchmaker’s Daughter by C.J. Archer

After years of apprenticeship to her father, India Steele is as competent a watchmaker as any in 1890’s London, but as a woman she’s prohibited from practicing her profession. When her father dies suddenly, her unscrupulous fiancé breaks off their engagement and assumes ownership of her father’s watch shop, which she’d assumed would be hers. In one fell swoop, India loses her beloved parent, her intended spouse, her home and her livelihood.

Desperate, she takes a commission from a mysterious American visitor, Mr. Matthew Glass, helping him search London for the man who created his very special watch. Although Mr. Glass is in the prime of life and has a powerful physique, he is clearly quite ill. Somehow, his watch has the power to temporarily return him to health, but its efficacy seems to decline each time he uses it.

India accepts temporary accommodation in her employer’s fine town house, which is also occupied by his peculiar associates: his cousin Wilhelmina, who wears male clothing and insists on being called Willie; his brash, foul-mouthed cook and deputy Duke; and his one-eyed driver Cyclops. As she assists Matthew in his quest, without any success, her suspicions about his true identity grow. A dangerous American outlaw is reported to be hiding out in London; everything seems to suggest that Matthew may in fact be that vicious desperado. India is torn between her increasing attraction to her enigmatic employer and her temptation to contact the authorities and claim the bounty for his capture.

Twice a year, Smashwords runs a site-wide sale that makes it easy for authors to offer their books at a discount, or for free. I’ve found that this is a great opportunity for me to explore the work of new authors. I picked up a free copy of The Watchmaker’s Daughter, attracted by its lovely cover. The novel had me hooked from the first page.

India is a delightful character, somewhat reminiscent of my own Victorian engineer Gillian Smith – though far more proper! At twenty seven, she’s considered an unmarriageable spinster, but she’s more concerned about the practical issues of supporting herself than about matrimony. Intelligent and level-headed as well as being technically skilled, India is bold in pursuing her objectives and not afraid to speak her mind. She is, nevertheless, a well-bred lady. She knows how to act malleable and polite when that is what’s required.

Matt and his entourage of American misfits provide a great contrast to India’s quintessential Englishness. The novel suggests a considerable gulf between England and its former colony; Londoners seem to view America as barely civilized!

As the book progresses, it provides a variety of surprises regarding Matt’s identity, as well as the history of his watch. When events accelerate to an exciting and satisfying climax, India proves herself to be a true heroine – and reaps her just reward.

The Watchmaker’s Daughter includes just a hint of magic, which the author handles very well. I prefer stories where supernatural influences have clear limits to those where anything might happen.

Overall, I really enjoyed The Watchmaker’s Daughter, enough that I may purchase the next book in the series (called “Glass and Steele”).

Which is, of course, why authors give away their books for free!