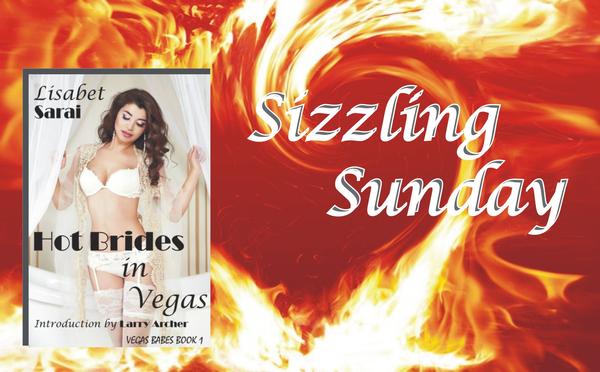 For today’s Sizzling Sunday post, I have a steamy bit from Hot Brides in Vegas (Vegas Babes Book 1). This outrageous and funny romp is only 99 cents right now at Smashwords, Kobo and BN, as part of my Lusty Month of May event. Remember that every comment this month is an entry into my giveaway, too!

The gleeful permissiveness of the Den challenges the women’s assumptions and undermines their inhibitions. Complications ensue when Jake and his groomsmen arrive to find Fran in the midst of her strip act. Then Aunt Giulia crashes the party, determined to save her virgin niece, and things get really sticky—both figuratively and literally.

Will love triumph? Will Francesca be drawn over to the dark side? Is there a difference?

Stumbling a bit in her haste, Laura made a beeline for the door, yanked it open, and ran into the corridor. Straight into a hard-muscled chest in a tight black tee.

“Hey!” said Steve, grabbing her forearm to steady her. “Are you okay?”

Heat raced through her at the casual touch. “Yes.” A whiff of his manly scent reached her. “No.” She gazed up at him—he was so tall that it was a stretch—and saw the friendly concern in his blue eyes. “I’m fine. Just needed to get out of the dressing room for a while.”

“You seem upset.” His eyes narrowed, and now she read something else in his expression. Lust.

Her breath caught and her cheeks burned. He wanted her.

“Are Katie and the other girls up to their usual antics?” he asked. He had not released his hold on her arm. “I guess a classy lady like you isn’t used to that sort of thing.”

“Some classy lady,” she responded with a forced chuckle. “In an hour or so I’m planning to take my clothes off in front of a crowd of strangers.”

“I can hardly wait.” His deep voice sank to a sexy near whisper. He snaked his other arm around her waist to pull her against his hard body. “I haven’t been able to think about anything else, not since you walked in the door of the club.”

He tried to bend down and kiss her. The mismatch between their heights was too great. After an awkward moment trying to adjust, he gave up. Instead, he lifted her right off the floor, bringing her face level with his.

“I’ve been thinking about this, too,” he murmured, before his mouth claimed hers.

Oh, god! He was a fantastic kisser! Warm, firm, not too wet, not too dry—just right! His tongue teased the seam of her lips. She opened eagerly, sucking it into her mouth, tangling it with her own. He tasted like black coffee and salt. Even now, at five o’clock in the afternoon, he was perfectly clean-shaven, with no annoying stubble to irritate her skin. She relaxed in his grip, completely comfortable even though her feet were six inches off the floor. Somehow she knew he’d never drop her.

The kiss went on and on. She didn’t want it to ever stop. Laura closed her eyes, drowning in the smell, the taste, the feel of him. Such strength!

Finally, his lips slid away from hers. “Damn, but this is tough to keep up.” He lowered her to the ground, making sure she was stable on her spiky heels before letting her go.

She searched his handsome face. He looked desperate.

“If I don’t have you right now, woman, I’m going to explode.” He half-dragged her across the hall, throwing open the door in front of them and pushing her before him into the dim space.

The door clicked closed. Laura barely had time to register the massive desk, the filing cabinets and bookshelves, the full carafes of liquor and the gun cabinet. Steve lifted her once again, as if she weighed nothing, and draped her over the padded arm of a couch. Her face was against the cushions, her ass in the air. His palms against her hips, he pushed her stretchy dress up to her waist, baring her bum. Then he yanked her thong down until it hung off one ankle.

“Hey! Be careful of my costume!” In fact, Laura found his frantic force a turn on. Still, she hoped he wouldn’t totally destroy her delicate garments.

“Oh, that’s…ah!” she sighed. Before she could complete her thought, he jerked his hips and drove his cock deep into her cunt.

The size of his cock matched the rest of him. He was huge. Still, he met almost no resistance as he slid inside. She’d been soaked since the interlude at Yvette’s shop. The naughty thrill of exhibiting herself in the slutty costume made her wet. Chantal’s roaming fingers, scary as they were, made her wetter. Meeting a hunk like Steve, watching Margaret and Linda, Francesca and Lily, Chantal and Katie—everything conspired to arouse her. Her sex was juicier than it had ever been in her life. Steve stretched her to the limit, but his iron-hard penis moved smoothly as he pumped it in and out of her soaked snatch.

Steve gripped her butt cheeks, holding tight as he rammed into her, hard enough to force the breath from her lungs. With each stroke, his cock mashed against her clit, kindling sparks that soon had her burning up. When he dug his fingernails into her flesh, she came with a scream that rattled the walls. He didn’t even slow down, continuing to pound her cunt while she convulsed around his fat cock.

He didn’t say a word. Occasionally he’d groan or huff. He was a pure fucking machine, without mercy, slamming his meat into her sloppy sex until she was sore and tingling.

Laura took everything he dished out. It was fast, rough, totally lacking in finesse. It was exactly what she wanted.

Only 99 cents at Smashwords, BN and Kobo – all through the Lusty Month of May! 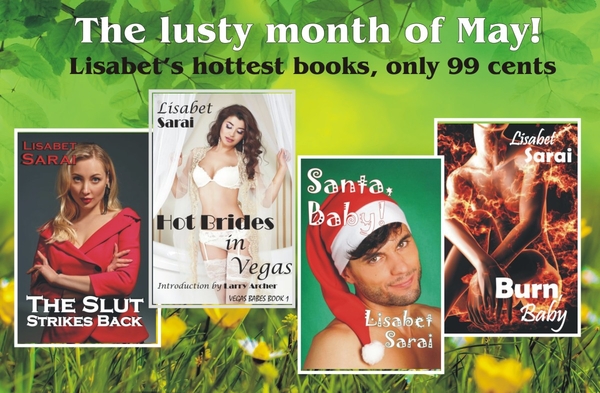 It's an enticing premise!

Yeah, this is a favorite of mine! What a hot read!