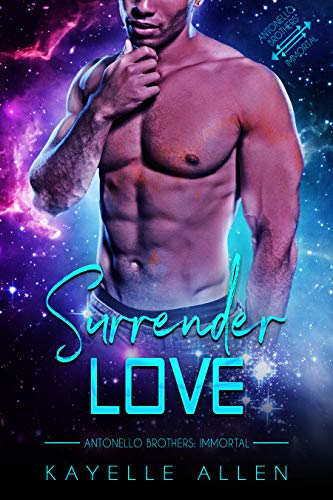 Izzorah Ceeow, the brilliantly talented drummer for music group Kumwhatmay, might be a rock star on Tarth, but he lives in fear. Fear that his dubious immigration status will get him sent back to his female-dominated home world of Felidae, where he’d be executed for fleeing his arranged marriage. Fear that his family will learn he’s gay. Fear that his band mates will discover he’s practically blind as the result of a childhood illness. Fear of heights so acute that he won’t go near a window. Izzy even has such severe stage fright that he throws up before his shows.

But the young felinoid refugee is stronger than he appears. Despite his terror, he has never missed a performance. He spends his money supporting less fortunate Kin, illegal immigrants struggling to get by and stay under the Empire’s radar. And he knows his heart. When he meets the unimaginably rich and powerful Luc St. Cyr, he’s almost certain that, improbable as it seems, this is the warrior of whom he has dreamed, the man to whom he will give his heart and his virginity.

Luc St. Cyr has everything he could want, except a loving partner. An immortal with a dark history, he has lived many lives and he keeps many secrets – not the least of which is the fact that he’s a double agent spying for both his king, the temperamental Pietas, and Pietas’ sworn enemy, his own father. His attraction to Izzorah astonishes him, but despite being on the rebound from a bad break-up, he knows he shouldn’t fight what feels so inevitable. Izzorah brings out all his protective instincts. Luc’s determined to use his wealth and influence to nurture the fascinating young Kin male and keep him safe.

Surrender Love is the first part of Luc’s and Izzy’s love story. Although the book has a scifi setting, it is first and foremost a romance, and as a romance, it succeeds very well. Although Luc and Izzorah make a highly unlikely couple, Ms. Allen had me believing in their connection from their first encounter, when Luc is so flustered he spills the water he’s pouring for the handsome Kin musician.

Luc isn’t used to real love, and he doesn’t do all that well at it. Izzy, in contrast, is a warm and generous soul who understands that love is about giving, not taking. But the young Kin won’t tolerate dishonesty – a challenge to Luc, who never tells anyone the entire truth. Since Izzorah is practically an empath due to his ability to smell emotions, Luc is going to have a difficult time keeping his secrets.

I very much enjoyed Surrender Love, but this was almost entirely due to my enchantment with Izzorah and with Kin culture. As a hero, Izzy grows and changes, gradually becoming the true prince Luc names him. The final scenes, in which he welcomes Luc’s former lover Wulf with both graciousness and strength, make it clear that despite his youth, Izzorah is in fact a worthy match for Luc St. Cyr.

As for Luc, well, I found him boring at best, infuriating at worst. The first chapter, which he spends acting out his anger and grief at being dumped by Wulf in the most dramatic and juvenile ways possible, almost made me give up reading. I would expect immortals who’d lived for thousands of years to be at least a bit mature, but Luc, Pietas and his twin sister Destoiya seem like petulant, self-centered teenagers much of the time. I suspect this isn’t the author’s intent – she likely wants us to find her Immortals mysterious and fascinating – but I’m afraid that isn’t the way I see them.

However, Luc’s love for Izzorah may redeem him. I am ready to believe that The Harbinger will actually change (and maybe grow up) in this relationship. I might even read the next book in the series to see this happen.

The novel is long (over 500 pages) but quite tightly plotted. I learned a bit about Luc’s past, but those side excursions did not overshadow the love story. The secondary characters are enjoyable and memorable, especially the Kin females, Luc’s head of security Shohn Lexius and Izzorah’s aunt Mynkoh. Even the android butler has an engaging personality. Despite the length, I never felt that the story dragged.

Before I close, I need to mention how intensely erotic I found the love scenes in this novel. This is noteworthy because these scenes are not at all graphic. Although Luc and Izzorah clearly have gay sex, no details are provided. Nevertheless, the heat flowing between the two men is palpable and vicariously arousing. Sometimes a kiss can convey as much passion and lust as a full-out naked clinch. Ms. Allen also uses Kin physical attributes, such as retractable claws and a soft pelt on the chest, to heighten the eroticism. As an author of explicit romance, I was deeply impressed.

I read the book about Luc and Wulf. Now I'll have to read this one too! Your reviews are dangerous to my TBR pile!

thank you for this gracious review. I would have responded sooner but I have moved and didn't have internet for a couple weeks. I love this review, especially the last paragraph. But you're wrong about me wanting them to be mysterious and fascinating. I intended them to be petulant adolescents. They have not grown past their original youthful ages but are working through those issues in every book. I suspect you'll see that when you read more stories. I laughed out loud when you wrote that, because it was great to see that they came across as I intended. Thank you again, Lisabet!