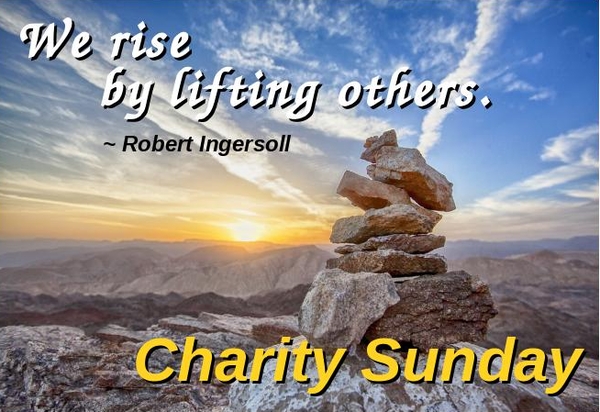 Greetings! For Charity Sunday this month, I’ve chosen an organization that isn’t strictly speaking a charity, but one which does a huge amount of good and which had a personal impact on my life.

In the summer of my seventeenth year, just before I was due to enter university, I developed anorexia. My weight dropped from about 115 pounds to 85 pounds. I looked like a skeleton (though the mirror told me I was obese). I started college in the fall but had to drop out after six weeks; I wasn’t physically strong enough to continue. A lost year and a half followed, when I was in and out of hospitals, including three months in a state psychiatric institution.

I was lucky enough to have a wonderful psychiatrist, and recovered sufficiently to return to university, but for years I didn’t have a normal relationship to food. During that transition period, when I was well enough to “function” but still messed up enough to be tempted by my old food games, I found Overeaters Anonymous (OA), a Twelve Step program (like Alcoholics Anonymous) for people with eating disorders.

You might think it odd that someone who effectively starved herself would join an organization of that name, but in fact not everyone in OA is an overeater. The first step of the famed twelve, adapted for OA, is “We admitted we were powerless over food – that our lives had become unmanageable.” Certainly that described me. Even when I was eating only a few hundred calories a day, food ruled my life.

OA, like all Twelve Step programs, calls itself a “fellowship”. Indeed, the support, care and tough love one finds at OA are (in my opinion) a key to its effectiveness. OA really helped me recover from my obsession. Meanwhile, I met some of my closest friends through “the program”, people who are still important in my life forty years later.

I could write more about OA and my own journey to recovery, but I know you want to get to the excerpt! I’m sharing a bit from my story “Sundae, Bloody Sundae”, one of the lesbian tales in Burn, Baby: A Sapphic Six Pack. This book is on sale for only 99 cents as part of my Lusty Month of May promotion (which ends on Tuesday).

Meanwhile, for every comment I receive, I’ll make a one dollar “7th tradition contribution” to OA. As I said, OA is not a charity. One of the traditions of Twelve Step programs is that they should be self-supporting and not take outside funds. So members make small contributions to cover the expenses of their local meetings. This being 2021, you can now do this online, of course. I haven’t been to an OA meeting in years, but I still consider myself a part of this powerful worldwide community. Ponticelli's was at least as good as I'd remembered. I ordered baked stuffed lobster for both of us, with a Caesar salad and a delightful bottle of fumé blanc. Jana was even livelier than usual, talking with her hands in the way she does when she's really excited. I ached to capture her birdlike wrists in my bonds and force her to stillness.

I must have been a bit drunk. Certainly I was hungry. In no time, I'd transformed my lobster into a pile of polished shell. Leaning back in my chair, satisfied and content, I noticed that Jana was not nearly so far along.

“Girl, you're not doing justice to this fine crustacean,” I laughed. “Come here.” I grabbed one of the claws from her plate, extracted a succulent chunk of meat and dunked it in melted butter. I held the dripping morsel to her lips. “Open wide,” I ordered.

If I'd consumed a bit less wine, I'd probably have been able to label her expression. Recalling that instant now, I realize that what I saw on her face was pure terror. At the time, I thought that she was simply being stubborn, refusing to part her rosebud lips.

She shook her head. “Please, I'm not hungry, Mel.”

“It's delicious. Have a bite.”

“Do I need to pull you onto my lap, flip up your skirt and wallop your scrawny ass right here in front of everyone?” A spark of lust mingled with the dread in her eyes, hardening my resolve. “Do as you're told.”

I smeared some of the butter over her lips. She shrank back in her chair, away from the laden fork. “Jana,” I warned, struggling to keep my temper in check. “You're disappointing me. I want you to eat the lobster.”

She knew me well enough by then to recognize that I was not going to back down. Like a slow motion film, she opened her mouth and allowed me to place the butter-drenched meat on her tongue. I watched her chew and swallow, then presented her with another piece.

Reluctantly, she accepted the tidbit.

“That's my girl.” She favored me with a weak smile. “Again, now.” I stopped feeding her after another few bites. She looked so uncomfortable that I thought she might not be well. I wasn't terribly surprised when she excused herself to go to the ladies' room.

When more than fifteen minutes had passed without her returning to the table, though, I started to worry. I paid our check, grabbed my shoulder bag, and headed after her.

I pushed open the restroom door. “Jana? Are you all right?” After the tasteful dimness of the dining room, the glaring fluorescents made me blink. It took me a few seconds to locate my lover.

She huddled on the tiled floor, back to the wall, knees drawn up, arms hugging her chest. Her cheeks were chalk white. Her eyes were closed, her lips pressed into a thin line. Her green hem had ridden up, exposing her lean, pale thighs. She looked forlorn and frail, like an abandoned child. A faint whiff of sickness hung in the air.

Comprehension smashed into me like a speeding truck. I crouched next to her and smoothed the fine wheat-blond hair off her clammy forehead. “Why didn't you tell me, baby?”

Jana's face showed far more pain than it ever did when I flogged her. “I — I was ashamed. I thought that if you knew, if you saw the real me, you wouldn't want me anymore. I'm foul, disgusting, an ugly, jiggling lump of blubber...”

“Don't be ridiculous! You're actually a bit skinny for my tastes — I like some flesh on my girls, otherwise spanking hurts my hand. But I figured that your work required a certain body type. It never occurred to me... Oh, Jana!” I clasped her to my breast, acutely aware of the fragile skeleton under her delicate skin.

How could I have been so blind? I knew eating disorders were no joke. I'd lost one friend to anorexia in college. Another had suffered permanent kidney damage. I shivered at the thought that happening to my sweet little ballerina.

Now only 99 cents at Smashwords, BN and Kobo!

Don’t forget to comment! And please visit the other authors participating in today’s Charity Sunday.

Great organization! Thanks for the excerpt!

Thank you for sharing your story, Lisabet.

A close relative is overweight. I will share OA with him. Thank you for bringing this worthwhile organization to our attention. The cover for your new release is dynamic!

I am going to look into OA. Thanks
debby236 @ gmail.com

Excellent post. Congrats on beating this terrible disorder! Will spread the word about OA.

I'm afraid I'm not a proponent of Overeaters Anonymous. To me, it came off way too much like a diet. With my endocrine problems, I will never be thin unless I become terminally ill. I have benefited from the Health at Every Size principles outlined by Dr. Lindo Bacon in their book of the same name. I also like The Fuck It Diet by Carolyn Dooner and have been appreciating the intuitive eating emails by Isabelle Foxen Duke. I wish I could afford to participate in her full program.
I don't know what I weigh. I don't even own a scale. I had to stop measuring my worth based on the number on the scale. It's still a fight for me every day not to hate and belittle myself because of my large body, a body that I know most people judge me negatively for.

Thanks for sharing your story, and for building it into a fiction story, which is an important way for folks to learn about these things in a safe way. I was bulimic for eight years. I kicked with a therapist who specialized in eating disorders. It was my third attempt. The first two made it worse. So many folks did not know how to handle it.

Thanks for sharing your story, Lisabet, and letting people know there is always hope to overcome issues. And thanks for taking the time to run Charity Sunday.

Thank you & I shared

Such a powerful post about your experiences, Lisabet! Thank you for sharing!
lindseyloucks (at) outlook (dot) com

Thank you for sharing.

Oh Lisabet, my dear. We all need to accept what we look like, whatever shape and size we are. There is so much more to you than your looks. Your endless creativity is what captures me every time, in your books. To think the world might not have had your contributions because you were internalizing self-hatred is an abomination! So glad you were able to persevere. Thanks for sharing, in hopes that your words and experience might save others as well.

Lisabet, my roommate sophomore year was anorexic, though it came on gradually through the year. I found out later that she didn't have a good end to her story. Wish she had found OA! Thanks for sharing!

Loved the excerpt, and so appropriate for the topic.

Thanks to all who commented and shared your personal stories. I'm about to go make a $20 donation to OA. Please come back this weekend for our June Charity Sunday.