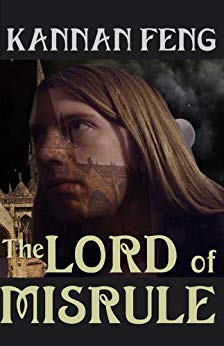 THE LORD OF MISRULE by Kannan Feng
Circlet Press, 2010

Verity Fen is a handsome, wealthy, brilliant Prince of the House of Fen. At twenty four years old, he is an accomplished mage, the most promising scholar of aetheric arts at the ancient university of Atia Selene. He is also stubborn, conceited, careless and occasionally cruel. THE LORD OF MISRULE tells the tale of his unlikely relationship with his designated assistant Iskander - a relationship that upends the certainties in Verity's world, as his servant becomes his master and his master, his beloved.

This is a truly delicious novella. Don't be fooled by the Potter-esque echoes; Atia Selene is a lot darker and dirtier than Hogwarts! While Verity is immature enough to be occasionally annoying, Iskander is a magnificent character, the essential Dominant who loves, desires and educates his hapless submissive. His quiet confidence and intense focus, plus the sense that he has many secrets, combine to make Iskander irresistible.

Kannan Feng's mode of discourse is perfect for this fictional world, sufficiently archaic to carry the music of the past without sacrificing comprehensibility or indeed, currency. Atia Selene might be medieval, but it might just as well exist in the here and now.

All in all, reading THE LORD OF MISRULE was both stimulating and satisfying. My only complaint is that I wish the book had been a full novel.