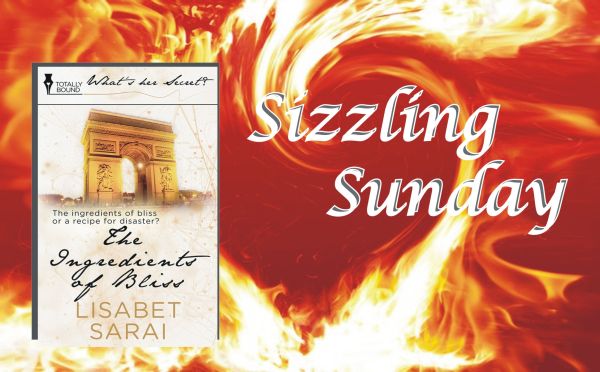 When the network sends the trio to France to shoot a series of cooking shows on location, Emily knows her career is on the upswing. Her plans fall apart in Marseille as a Hong Kong drug syndicate kidnaps both Etienne and Harry. The Iron Hammer Triad mistakes Etienne for notorious gangster Jean Le Requin, who has stolen their drug shipment, worth millions. Emily realizes she must find the real Le Requin, retrieve the purloined dope, and bargain it for Harry’s and Etienne’s lives. The secret she’s been keeping from Harry might prove useful. Still, what chance does one woman whose knife skills are limited to chopping vegetables have against the ruthless cruelty of two criminal organizations?

“You don’t have to be ashamed or embarrassed,” Harry added. “All we want—both of us—is to satisfy you. To please you and make you happy. Can’t you just accept that?”

Harry hooked an arm around my neck and pulled me down into lush kiss. His tongue was assertive as ever, yet I caught a hint of uncertainty in his manner. Under his brashness, he worried that I’d reject the solution he and Etienne had worked out. If I did, would I choose him, or the suave, glamorous chef?

I relaxed and let him plunder my mouth, offering reassurance via my physical surrender. His hands roamed over my body, visiting all the sensitive spots he’d discovered in our months together. There was no pain now, only bliss, pouring from him into me.

Warmth pressed against my back. I smelled vanilla and thyme. Etienne’s fingers joined Harry’s, tracing along the top of my corset. He stroked the tender flesh under my arm, making me shiver, then let his palm wander down my side to the curve of my hip. His uncharacteristic boldness increased the thrill of his touch. You’ll be sorry, I thought, giddy with desire, as Harry continued his hungry kisses. I’ll trash your butt until you can’t sit down.

Etienne knew he’d be punished. We both knew that was part of his motivation.

Only part, though. I felt the hair lifted off my neck, the moist, gentle pressure of Etienne’s lips between my shoulder blades. The eloquence of that simple gesture almost brought tears to my eyes. I eased my lips away from Harry’s, beaming him a look I hoped was full of love. Then I swiveled to offer my mouth to Etienne.

The chef accepted my kiss with the eagerness of a starving man. He opened to the probing of my tongue, letting me drink my fill of him. I tasted the walnut mousse he’d sampled earlier at L’Auberge de Francois-Martine and the Courvoisier he’d used to wash it down. Under it all, I caught a hint of some half-bitter flavor that reminded me of rainy autumn afternoons in Jardin les Tuileries. As I kissed him, I realized I’d been craving this since the first day he’d graced me with that haughty smile.

While his mouth was subservient, his hands became increasingly more brazen, palming my breasts and thumbing my nipples, then sneaking down to tease my lower lips. Meanwhile, Harry was busy unlacing my corset. I hadn’t appreciated how much the garment had constrained me until he managed to slip it off, somehow without breaking the lip-to-lip connection between Etienne and me.

I paused to draw in a lungful of the sex-scented air and looked from one man to the other. Had Harry minded my kissing Etienne? Did Etienne think I was rejecting him for Harry?

“What…what about male ego?” I gasped, as Etienne’s fingers delved into my cleft and found my clit. “I thought—oh, yes!—thought that you all see other guys as threats, challenges to your masculinity…”

Harry urged me onto my hands and knees and buried his face between my thighs. He slithered his tongue into my channel while Etienne continued to stroke tingling nub at my center. A new climax gathered deep in my pelvis—I’d lost count of how many times I’d come, by this point—encouraged by the wet shock of Harry’s tongue circling my rear hole.

“Other guys,” Harry replied, taking a breather before returning to lick me into a further frenzy.

“Not us,” Etienne agreed, diddling my clit with one hand while stroking his gorgeous erection with the other. I imagined that lovely cock pounding into my cunt. I could make those fantasies real. All I had to do was ask.

“We’d rather share you than lose you, love.” On his knees behind me, Harry ran his cockhead along my slick crevice, then pushed inside, filling my pussy with delicious, familiar hardness. He waited, letting me adjust to the welcome intrusion. I closed my eyes, focused on the bliss rippling through me.

Satin-soft skin brushed my lips, leaving a residue of moisture. My eyes flew open to find Etienne kneeling before me, presenting his cock for my consumption.

His eyes shone, blue as a summer sky. “If I could be so bold…”

I lunged forward and swallowed the whole sleek length of him. Etienne trembled on my tongue, but didn’t move or thrust, awaiting my instructions like the good submissive he was.

I sucked hard, my nose in the musky tangles of his pubic hair. His fists clenched by his sides, he fought his natural inclinations.

Harry drove deep, taking me over. The sensations dragged my attention back to the tantalizing ache building in my core. Yet another climax shimmered in the near distance, with Harry pushing me closer with every thrust.

Lovely, bossy, kinky, sensitive Harry, who claimed me as his slave only to devote himself to my pleasure.

I must have been a saint in a previous life, to deserve such luck in this one.


The Ingredients of Bliss is available in ebook and print. Get your copy from Totally Bound, Amazon, Barnes and Noble, or your own personal favorite bookstore.