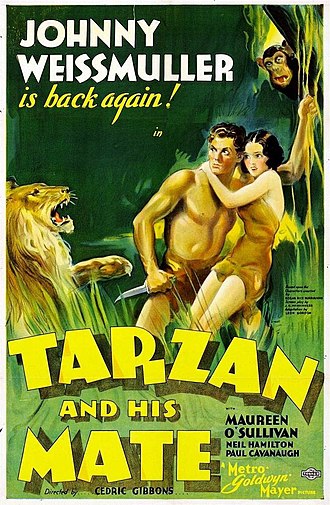 Tarzan of the Apes by Edgar Rice Burroughs

In fact, I felt the film left a lot to be desired. Maureen O’Sullivan is lovely as Jane, but Weissmuller makes a rather skinny and anemic-looking ape man, in my opinion. The characters are stereotyped and the treatment of black-skinned people is appalling.

However, the experience made me curious about the original story, so I downloaded the book from the Gutenberg Project. This is a non-profit organization devoted to digitizing and distributing books that are out of copyright. Their website offers thousands of ebooks in a variety of formats, including (I discovered) Epub.

I found that Burroughs’ Tarzan has little in common with the popular movie versions. He is a natural gentleman, with a powerful sense of morality, despite having grown to maturity in the jungle. His parents, members of the English nobility, are abandoned on an uninhabited African beach by mutineers and eventually killed by the wild apes, one of whom takes their infant to her breast after her own child is slaughtered by her jealous mate. She raises the boy to manhood. Although he cannot compete physically with the male apes, Tarzan triumphs to become the leader of the tribe due to his superior intelligence. However, he eventually finds himself dissatisfied with the society of the apes. When he enters the world of men, he’s dismayed to realize he does not belong there either.

In Burroughs’ novel, Tarzan laboriously teaches himself to read and write English by studying books, including children’s primers, he finds in the hut his parents built. When Jane Porter and her entourage arrive (similarly abandoned by greedy and murderous seamen), he communicates with them by writing notes, but cannot understand their spoken language at all. When he does learn to speak, there’s none of the “Me Tarzan, you Jane” nonsense we’ve been fed over the years by the popular adaptations.In fact, his first spoken language is French!

I was very much caught up by Burroughs’ adventure, despite its occasionally racist tone and its confused notions about Africa. (As far as I know, lions do not inhabit the jungle, only the plains.) I read the whole book in a couple of hours, and truly enjoyed it. The author does a remarkable job capturing Tarzan’s concurrent civility and savagery. I couldn’t help fall in love with him, right along with Jane.

Burroughs portrays Tarzan as something of a tragic hero, a man of great promise who will always be an outsider. Much to my surprise, this first book ended not with him claiming Jane as his mate, but on the contrary, sacrificing his own desires because he believed she would be happier with someone else.

This was definitely not what I expected. I immediately downloaded the next volume in the series, The Return of Tarzan – hoping for a happier and more romantic ending!

Wonderful analysis of the Tarzan universe. You're right about the movie you watched, but consider the year it was made. In the Great Depression, people were looking for escapism and movies provided that. Yes, people of color weren't depicted with much respect, but the Tarzan flicks weren't the only culprits. I'm not defending it, but that's how the country was at the time. Sort of like the way Japanese and Germans were stereotyped in all those WWII movies.

I think my review is a bit too short to be an "analysis" LOL. But I appreciate your comments. With today's focus on "new releases", we sometimes forget the mine the jewels from the past. I have also downloaded Mary Shelley's Frankenstein, which I've never read in the original.

We are all familiar with the derivative works. It's worthwhile to go back to the original sources.