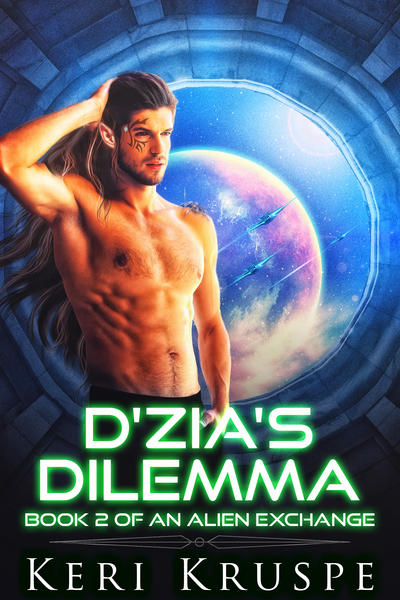 Guardians of the Galaxy meets The Princess Bride.

The second book in the trilogy, D’zia’s Dilemma features a disembodied galactic gangster, a snarky spybot, and a sentient, lovesick spaceship. If you like non-stop action, powerful emotions, and sensual aliens, you’ll love the next installment of An Alien Exchange.

A woman betrayed. An alien duke faced with an impossible decision. Can two lovers who long to be together overcome those determined to keep them apart?

Lora Dharma Callahan excitedly agrees to leave Earth to attend “The Exchange” and meet the alien mate of her dreams. Instead of finding true love, she’s forcibly kidnapped and held captive by an alien lunatic who plans to take over the galaxy. He’s going to use her to create a serum that will ultimately enslave every human female on Earth. But no emperor wannabe is going to keep this girl down. Lora will find a way to save not only herself, but her planet as well.

Duke D’zia Yaq E’etu, cousin to the crown prince of Zerin, suspects a malicious plot to overthrow the galactic government. When the opportunity arises to insinuate himself in the suspected traitor’s stronghold, he doesn’t hesitate to use his infiltration skills. While there, he encounters Lora, whom he soon recognizes as his TrueBond. The only problem…she’s imprisoned and scheduled for experiments that will destroy her.

Now D’zia has a hard choice to make. Should he stay and get the proof he needs to prevent a narcissistic megalomaniac from taking over the galactic government…or escape with the only female he can claim as his own?

An eternity passed before Lora’s brain cells decided to come back online. Which wasn’t easy since D’zia had pulled her hips into his hard groin. Holy shamoka, was all of that for her? Wait, what did he say? Something about a JR10?

“D’zia.” She pulled her mouth away from his while her inner nasty girl screamed to keep going. “Don’t, I can’t think when you kiss me.” Her heartbeat was going crazy and it was hard to breathe.

Okay, take in a few deep gulps of air…yeah, now she was calm. Right. She put her hands on the sides of his face to place him farther back from her so she could gaze into his eyes. Feminine pride warmed her as she took in the dazed, unfocused stare he gave back. Lordy, those dual-colored orbs were beyond beautiful, especially dilated in passion. His wet, full lips were tempting, and she’d love to spend eternity bathing in the weight of his intense focus.

His three-fingered hands burrowed under her loose tunic to wrap around her naked waist; his palms massaged her eager skin in heavy strokes.

She jumped when warm oils under his hands caused a path of lightning to cover her skin wherever he caressed. A fleeting scent of spiced licorice teased her nose. She drew in a shuddering breath as she cleared her throat. “D’zia, please, let’s stop and think about this.” 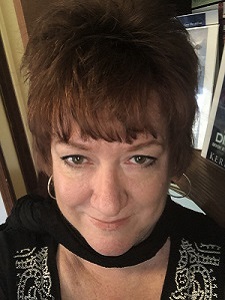 Keri Kruspe has been an author since the age of twelve and has always been fascinated with otherworldly stories that end in Happily Ever After. Her current works, An Alien Exchange trilogy had its first release Winter 2018. The trilogy continues with D’zia’s Dilemma and concludes with Ki’s Redemption — to be released by the first quarter of 2019.

GIVEAWAY! Kerry will be giving away a $25 AMAZON/BN GC

Wow… thank you for including me on your blog! Since I work full-time, I’ll only be able to make a couple of stops throughout the day to answer any questions or comments. I really appreciate your time, and I’m looking forward to everyone’s response to D’zia’s Dilemma, not only here but also when you leave a review at your favorite retailer. Also, everyone who signs up for my mailing list gets a FREE companion book for the Alien Exchange universe!

A warm welcome to Beyond Romance. I work full-time too, so I have to ration the fun of being Lisabet. Anyway, your book sounds like great fun. I hope the tour brings in lots of new readers.

The cover & blurb really grabbed my attention and made me add this & book 1 to my TBR pile...sounds like it will be right up my alley. Can't wait to read this trilogy. What is your Muse / Inspiration for writing this trilogy and / or in general?

Not my usual genre, but there's always a first time to dip my toe in new waters!

I love the blurb. It made me smile. But I'm pretty sure D'Zia picks the girl. Just saying.