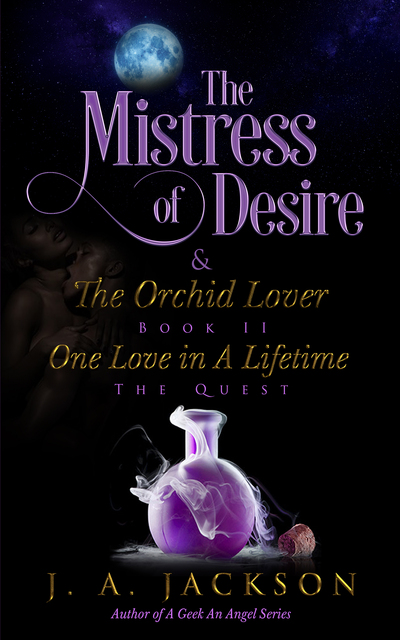 Neither Tiara Blake or Delmar Devereaux has a past to be proud of. With a joint history packed with dishonesty, blackmail—and a juicy, torrid love affair—the pair didn’t expect their paths would cross again.

Can a quest to break an ancient curse give two former lovers a second chance?

After a torrid love affair, shady businessman Delmar Devereaux disappeared from Tiara Blake’s life, leaving her to raise their twin sons on her own. So, when he shows up unannounced one day, her first instinct is to kick him to the curb.

But Delmar has discovered a centuries-old curse placed on the pair by their ancestors—and he needs Tiara’s help to break it. Ending the curse means they will have to learn to trust each other, which won’t be easy when their explosive secrets are revealed.

Once again torn between lust and duty, can Delmar and Tiara discover the true meaning of love in order to break the curse before it’s too late? Or will their complicated past doom them forever?

Join Delmar and Tiara in Book II of the Mistress of Desire and the Orchid Lover on their sensually sizzling action-packed adventure!

Delmar’s voice was sad and serious. “I come to ask the three of you for your help. I have nowhere else to turn. The courts won’t help me. The legal system is useless,” his words tumbled out. “You see, for it was I, who started my problem in the first place, and well the courts won’t even hear my case,” he sighed heavily.

Glenda sighed. “This sounds serious if you can’t use your money to persuade the courts.”

“It is serious,” Delmar assured them. “Let me go back to the beginning. Perhaps you were aware of my case in court almost a year ago, concerning the twin sons, that Tiara Blake, had?”

“Yes, of course, it was all over the news,” Consuelo stated, in an excited Spanish accent.

“Yeah, I heard all about it too,” Nona said glumly. “The DNA found you were not the father and those tests are normally 100% accurate.”

“Yes, they are supposed to be. But there are ways around them,” Delmar paused. “You see a root worker, a spell caster. She assured me, that she could cast a spell that would exclude me as the father of the twins.”

Glenda interrupted. “Yes, but everyone knows that DNA is 100 percent foolproof and it doesn't lie. No spellcaster or root worker can mess with biological DNA.”

“Glenda is right,” Nona stated. “DNA tests are considered infallible – they are the gold standard in court.”

J.A. Jackson is the pseudonym for an author, who loves to write deliciously sultry adult romantic, suspenseful, entertaining novels with a unique twist. She lives in an enchanted little house she calls home in the Northern California foothills.

She spent over ten years working in the non-profit sector where she wrote grants, press releases and contributed many stories to their newsletter. She was their Newsletter editor for over ten years. She loves growing roses, a good pot of hot tea, chocolate, magical stories, suspense stories, ghost stories, and reading Jane Austen again and again in her past time.

Buy the book for only 99 cents! First book in the series is free for a limited time.

J. A. Jackson will be awarding a $25 Amazon/BN GC to a randomly drawn winner via rafflecopter during the tour.

Welcome to Beyond Romance, J.A.!

I hope your tour does really well.

To the Host,
I send A Big Thank You, for hosting my book, Book II of Mistress of Desire and The Orchid Lover. Please accept my sincere thank you for your hospitality. Your Blog community’s support and reception is greatly appreciated. Thanks again for your hospitality.
Sincerely,
Author J. A. Jackson
P.S. Should there be any questions, I will address them as soon as I can, normally I am able to access my emails, etc the same day in the P.M. Thanks for your patience.

Hello Everyone!
Thank you for your interest in reading my book. It is Book II, Mistress of Desire and the Orchid Lover. If you would like to read Book I, first you can obtain it for free over at Smashwords. Here is the small link http://bit.ly/2dF8GId
and big Link https://www.smashwords.com/books/view/667779
I hope you get a chance to read both books.
Again, Thanks for your interest.
Sincerely,
Author J. A. Jackson aka Jerreece

Always fun to hear about another new great book. Thanks for sharing!

Did you help design the cover? I hope your book is a success. Bernie Wallace BWallace1980(at)hotmail(d0t)com

Hello Again Everyone,
Just wanted to give you the heads up on another one of my books.
This one is Free on Kindle and todays the last of the Free Kindle Days.
Free on Kindle Jan 26, 27, 28th, 2019
When a Taker Dreams
Sometimes life is not that simple. Love can be complicated. Cierra Cantrell is insecure, tortured by her past life experience with men. After accepting the help of a matchmaker. Cierra soon discovers that old vendettas from the past could stop her chance at happiness and put her in danger!
https://www.amazon.com/dp/B07K4JVRCT

Thanks again everyone! I am so thankful & grateful for your allowing me to be here today.
Again, Thanks for your interest.
Sincerely,
Author J. A. Jackson aka Jerreece