A lot of people ask writers where they come up with their ideas. For me, they come from all over. Sometimes I read a book and an idea from a secondary character or even a small description can send me spinning with a new idea. Sometimes it’s a movie or TV show that employed something that I can see ending up in a story or that gets my mind turning in a new direction. And sometimes it’s just random things that happen in real life, on the way to the grocery store or at work.

For Owned Forever, the idea to write this book came from my readers.

To really understand where this idea came from I have to start with first book in the series. When I first wrote Owned For Christmas I had no intention of writing another story. It was just a fun Christmas idea that came to me while watching a cheesy romantic comedy. In the movie a women went home for Christmas and ran into an old beau. By the end of the movie ex wasn’t in his title anymore.

I loved the idea. We all run into some awkward experience when we go home for the holidays, but to crank up the uneasiness of the interaction, I figured my heroine shouldn’t go to her own home, but someone else’s. And why would she be going there, well of course she’d be going home with her current boyfriend for the holidays. And what would she find…her ex-Dom. Pretty awkward, right?

But as I wrote the story it evolved. The conflict expended from the two guys to be more about Kate, my heroine, accepting her true submissive nature. As a result the scenes with her ex-Dom, Grant, expanded, and her time spent with the two guys or her vanilla lover, Daniel, diminished, caving to the direction of the story and the inner turmoil.

Unfortunately for a lot of readers, that meant they didn’t get to know Daniel well enough to love him the way I do (and I do love Daniel tremendously, he’s got such a quirk sense of humor and go with the flow attitude, not to mention ripped abs, I would have trouble not taking him home myself). When a reader mentioned she wanted to see more of Daniel and his struggle with joining in with a ménage relationship, the wheels in my head started turning, and Owned Forever was born.

Owned Forever delves into many of the issues and conflicts I didn’t have time to touch on in Owned For Christmas, and a few that didn’t even arrive back on that snowy Christmas night. This story highlights Daniel a great deal more, and his issues with their new relationship, while also showing of his funny sense of humor and devotion to his family and Kate.

At this point I have no plans to write another story for these three fantastic characters. But if the readers keeping giving such amazing inspiration, I may not have a choice. After all, I’m a slave to my muse and the reader. When they work together, I’m done for.

I hope you’ll check out my newest release, Owned Forever, now available with Totally Bound Publishing, inspired by my amazing readers. And to read the beginning of Grant, Kate and Daniel’s story, check out Owned For Christmas. While both books can be read on their own, just like most other things in life, they are better in twos. 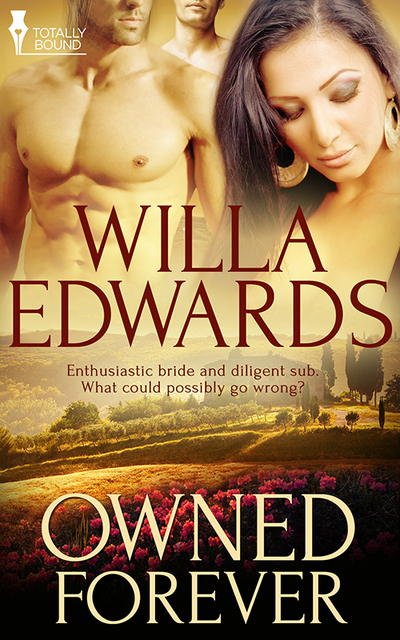 Two sets of in-laws, a Dom with the need to assert his power, a fiancée with an inferiority complex and a country chic wedding to throw. What could go wrong?

For the last six months, Kate, Daniel and Grant have been living blissfully in Colorado. But that’s all about to come to an end. They’re opening up the ranch and their relationship to outsiders—Kate’s parents. While her future mother-in-law has adapted well to their unconventional relationship, Kate knows her parents won’t feel the same. At her insistence, the whole Farrell crew agrees to keep the true nature of their relationship a secret—at least from her parents—for the whole wedding weekend.

Stretched thin, Kate tries to be everything for everyone. The enthusiastic bride, the good daughter, the diligent sub that’s always under the control of her Master and the affectionate fiancé that wants nothing more than to be married. But with everyone’s needs weighing her down, eventually Kate snaps under the pressure.

In one quick moment of need, their secret is out of bag, and it’s not just her parents that feel betrayed. Can Kate convince all the people she loves to accept and participate in this untraditional wedding party, or will her needs doom her relationships for good?

Who knew Happily Ever After would be this hard!

Publisher's Note: This story is a continuation of Kate, Grant and Daniel’s relationship from Owned For Christmas by Willa Edwards. It is best read in sequence but can be read as a standalone.

“When are your parents arriving?” Gale spread a sheet across the prickly surface of the bales of hay set up across the open yard in a circle for seating. The better for their guest’s comfort.

Kate surveyed the field before her. It still amazed to her how much the place had changed since she’d first arrived. This field that had been covered with three feet of snow back at Christmas time, was now filled with swaying grasses and bright Columbines. It really was beautiful here.

This would be the perfect place for a wedding.

It may have taken a few months and the melting of three tons of snow, but Kate now understood why people loved living in this area—why her two men loved it here so much and felt so connected to this land. And amazingly, she felt the same. She couldn’t imagine ever moving back to Dallas. No matter what her parents said.

“They’ll be here tomorrow at ten. They’re on the last possible plane coming into Grand Junction from Dallas before the ceremony.” Kate tried to keep the resentment from her voice, but she didn’t succeed. She loved her future mother-in-law. Gale was fantastic. Kate still had trouble believing she’d accepted her relationship with both her sons so easily. Not to mention all she’d done to help with Kate’s wedding to her younger son, Daniel.

She still wished she was picking floral arrangements, assembling favors and decorating pews with her own mother.

“I got them a room at the Country Side Inn.” It was the best hotel for miles. Though Kate doubted it was up to her mother’s standards.

“I hope so.” That’s the only way Kate wouldn’t hear about how awful the hotel was for the next ten years, like her parent’s trip to Maui seven years ago, that they always brought up at Thanksgiving.

“Are you planning on telling them everything?” Gale looked up at Kate from where she arranged ribbons around the edge of the bales, creating an aisle down the center toward the arch Grant had built.

“You mean about the fact that I’m really in a relationship with two men? That I’m marrying one and sleeping with both of them?” Kate looked over at the woman who was to be her official mother-in-law in only two days. “Are you asking if I plan to tell them that?”

Gale cast Kate a sour look. She had made her opinion obvious many times before, but she didn’t know Kate’s parents. Kate’s mother was ready to have her checked into a psych ward for giving up a good job in the city—though her teaching position hadn’t become a good job to her mother until the other option was no job at all—and moving out to the country for some hick. Kate could contemplate what her parents would say if they knew she hadn’t come out here for one country hick, but for two.

“Not everyone is as understanding as you are, Gale.” Kate still couldn’t believe how lucky they’d been with Gale—how understanding she was, how accepting. From the moment she’d discovered their three-way relationship, Gale hadn’t ever made her feel insane or immoral for the loving both of her sons. It’s more than Kate would have ever expected. “My parents aren’t as open-minded as you are.”

“I’m not that understanding, dear. I just want my boys to be happy. I see how happy you make them.” Gale looked up, her warm honey-brown eyes twinkling, and Kate smiled.

How every member of this family managed to make her feel welcome and included always surprised her.

“I’m sure your parents want the same thing for you. Once they see how happy those boys make you, they’ll accept the three of you together too.”

Kate shook her head. A part of her believed Gale was right. That her parents really did want her to be happy. But they’d never conveyed it well in the past. And her wedding didn’t seem the right time to put them to the test.

She still remembered the way her mother used to talk about her teaching position to her high-society friends, the note of disdain in her mother’s tone. Teaching kindergartners was not the prestigious career Margo Baker wanted for her daughter. And she had no doubt Daniel wasn’t the high-society husband she’d envisioned for Kate either.

Kate didn’t care what her mother thought. She’d made her decision. She had no desire to go back—to Dallas, to the quiet desperation or to the need for more that had almost eaten her alive.

But she couldn’t stand the idea that her parents would berate Daniel with their undercutting words and quiet insults. Not to mention how they’d act if they found out it wasn’t just Daniel she stayed in Colorado for, but Grant as well.

“You’d be surprised, honey, what lengths a parent will go to for their child. They might not always show it in the way you wish, but I’m sure they’re doing what they think is best for you.”

“One day, you’ll see for yourself.”

Kate rolled her eyes. Gale had been tossing off a lot of comments like that lately. But it would be a while before Kate had any serious experience with parenthood, no matter what Gale might desire.

Welcome back to Beyond Romance. I love the premise of this book. Ripe with potential for conflicts!

Good luck with it!

Thank you so much for having me Lisabet. Its always a joy to stop by.