I’d like to thank Lisabet for hosting me today. I believe, since my first book was published in 2004, this year is my busiest to date in terms of writing. After joining a group of authors who are producing monthly box sets of sexy shorts, I find I’m writing more consistently than ever, which amazes me because recently I had entertained thoughts of slowing down.

For years I had written stories set in a series called Dareville. Couples, and the occasional triad, live in this small Virginia town and enjoy each other. In the last decade I’ve written five novel-length works and several shorts in the series, and after a while thought it had run its course. Sales for my most recent Dareville novel were quite disappointing, and I thought why not leave it there and work on other worlds.

Earlier this year, though, I was contacted by All Romance, who planned to publish stories for their Out For You series. They had many authors committed to write M/M, but they wanted stories that touched on all the letters in LGBT. Since I’ve written F/F and sold well at ARe in that pairing, would I like to contribute a lesbian romance?

I have to tell you, it’s flattering when a publisher invites you to be a part of something. Not only that, ARe had yet to publish a lesbian romance at that point, so I’d be a pioneer of sorts. I couldn’t resist, and made time in my writing schedule to work on a story. Then I had to figure out what to write.

I had just seen SUGAR RUSH, my F/F romance with Ellora’s Cave, published, and it reminded me of the Dareville stories I’d written that were centered around a character named Tish. Tish is a chocolatier and caterer and owns the local sweet shop. I had envisioned more stories with her, but as I had Tish hooked up with a hot mechanic and engaged to him I couldn’t suddenly make her a single lesbian!

Then I thought, if she runs a shop she needs somebody to help out. I hadn’t yet created an assistant to work at Tish’s Riches, so I took the ball and ran from there. Not long after accepting ARe’s invitation, I had mapped out the story for THE SWEETEST DARE. This story is about a young woman smitten with her new co-worker, only she’s gun shy about coming out to friends. Kit thinks if anybody figures it out, fine, but she’s not a showy person. Sidney, on the other hand, doesn’t care what people think but she would like to go out once in a while with her new girlfriend. This point of conflict tests their relationship until Kit realizes what she could miss if she’s not true to herself.

THE SWEETEST DARE is available at ARe and iTunes now, and is coming to Amazon and BN. If you like contemporary lesbian romance, I hope you enjoy it.

Please comment and I will award one person an eBook from my backlist. Don't forget to include your email address so I can find you! 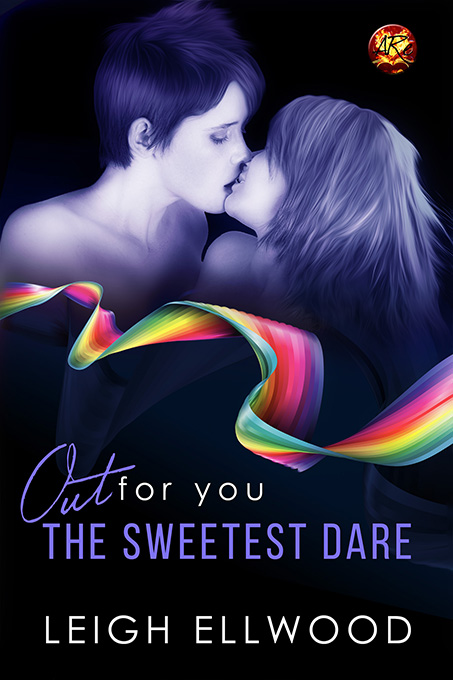 About The Sweetest Dare

Kit Cheever is more than eager to welcome her new co-worker, Sidney Campbell, to Tish’s Riches, the best chocolate shop in Virginia. While the long days on the job hardly exhaust them for long nights of play, Sidney hopes for more in their relationship than candy-coated orgasms. Is dinner out too much to ask?

Kit would oblige, but she likes her privacy. The people of Dareville don’t need to know she and Sidney are anything more than co-workers. Why be “out” when it’s so much hotter and safer indoors?

Kit won’t even hold her hand in public, which upsets Sidney. She’s not asking Kit to march in a parade, just to acknowledge her feelings to the people she loves. What will it take to get Kit out of the closet and into Sidney’s heart?

Leigh Ellwood writes romance and erotica, particularly MM and FF pairings. She loves to read and drink wine, too.

Congrats on your book's release... wishing you the very best with your writing!
greenshamrock at cox dot net

This sounds great, Leigh. I love the cover, too.

Good luck with it!