I don’t know about you but I do like ladies with nice legs who wear high heels. They must be very uncomfortable to wear, but I’ve never heard a woman tell me that. As a result of my admiration a lot of my books feature high heels in the plot but they seem to fall off when the heat begins.

Perhaps I should explain: I’m a man who writes romance books. It all started when I was writing my autobiography, and I began to remember all the lovely ladies in my life; my first wife unfortunately died suddenly but as I was working in West Africa at that time the pressure of work, and the presence of a local baby nurse eased our distress.

My next wife I met at a party in England, and I must admit that although our physical life was red hot, living together was not and which was probably aggravated by the children, who were not hers.

I moved from West Africa to Libya and then on to East Africa, and there was no shortage of ladies on the way, and I fell in love with a simply drop dead gorgeous Indian widow, or at least I thought she was a widow until her husband suddenly turned up!

My work moved from Africa to Asia, and looking back now I should have gone straight to Bollywood! I found the Asian ladies marvelous, although sometimes a problem to talk to. The dating system works differently there, unless you move in the irresponsible social circles, which my work prevented me from doing.

I’ve now been married for seventeen years to a lovely Vietnamese former widow who had two girls and a boy, making a “total for us” of seven children and now four grandchildren.

Then about three years ago I began to start writing about some of the lovely ladies that I had met in between my four marriages! This is where the high heels came back into the picture. I began to think of plots or stories, and immediately started to write romance novels; most of the time with a happy ending.

I couldn’t see any point in my hero just giving the girl a kiss and then getting married! Life doesn’t work like that; almost every lady I’ve known has been concerned about their potential love life, in other words sex, if they decided to live with that man! Really not joking; apart from other considerations like income, housing, transport, social life, friends and so on.

This meant that my books had to have sex, and explicit sex, written into the story; and also consideration about birth control and disease prevention, which works both ways. I’ve had battles with editors when my narrative has contained jokes about birth control methods; but these jokes can be real and actually happen in real life. What I have not included is pornography in my sex scenes; sorry but that is another type of book.

The first romance book I wrote was based in West Africa and published by Blushing Books; although they regard it as an anthology – one man five ladies, but only one at a time! See the excerpt below.

In East Africa, Phaze Books became my publisher, and I wrote stories about real individuals and their love life, and sexual activities together.

In Asia, Sri Lanka, eXtasy Books took over the publishing, but the social life there is very different and the story had to be longer in order for my hero and heroine to get into bed together! I lived in Singapore as a boy so I just had to base one story there, and believe you me the ladies there are lovely as well.

I still live in Asia and write romance novels usually based there, but recently I’ve moved some of my story locations to Europe, or even back to the southern parts of Africa. I only write about locations that I know, even though the roads and bridges and buildings change over the years.

If my hero is chasing through the bush to get to the lady the desires then I can’t have him driving with one hand on the wheel as he cruises along. He actually has to navigate his way over dirt roads, with water, mud and potholes along the way, and maybe for hundreds of miles, and avoiding wildlife on the way.

Please enjoy some of these excerpts, and (I hope) the books themselves. 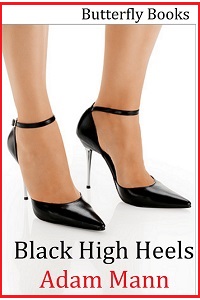 “I ought to go and leave you to your work,” she said and started to get up to put the tea cups away. As she walked to the door, Bill took her hand and pulled her to him. She did not resist, and they stood face to face. She smiled up and Bill so he kissed her.

She put her arms around his neck and shivered with relief.

“I’ve been waiting all day for you do that,” she said, and smiled at him again. They stood for a minute close together looking at one another, and she smiled again.

Bill led her towards the nearest bed, and they both sat down on the edge of the bed together. They were still very close to one another.

Bill could see her cleavage, so he leaned across her and kissed it, and Binh shut her eyes and held his head close to her breasts. He kissed her a bit lower and began to unbutton her shirt to get at her breasts. She was not wearing a bra. So he kissed each breast, and then her nipples and she groaned. She lay back on the bed, pulling him with her. 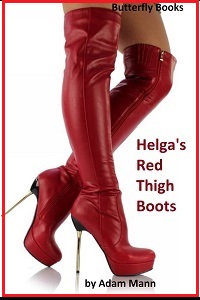 I did not see Helga back at the house until the next morning, which was a Saturday, and again I went down to the kitchen, ostensibly for an early morning cup of tea. I had on only my cheap cotton sarong and a collarless shirt that I had brought in India some years ago.

Helga was wearing her housecoat again, with only one or two buttons done up! Underneath I could see that she was wearing something like a flannelette nightgown, and when she turned to give me a mug of tea most of the housecoat opened at the front!

She did look attractive.

It was my penis that gave me away! And she saw the movement in the front of my sarong.

“Oops,” she said and smiled.

I laughed myself and said, “Quite frankly I’ve forgotten, but I’m sure I’m not the only man who has a name for his penis!”

She gasped, held her hand to her mouth, and blushed!

“You mean women do as well?”

“If I tell you, will you promise to keep it to yourself?”

“Yes,” I lied, but could not help smiling.

“Do you remember Harry Potter?”

“Well there was a character called Helga Hufflepuff, which made me laugh and one morning after a shower I was powdering talc on the skin around my pubis, when I dropped the container, and swore “hufflepuff”, and ever since then I’ve called my pubic area hufflepuff!”

We both laughed, and I looked at my sarong, and said,

“There you are Fred, a kindred spirit!”

“Now I’ve definitely got a problem,” Helga said, “Hufflepuff is
itching! What can you do to help me?”

“Try talc,” I volunteered, and the coward came to the fore again as I stood up to go and shave. 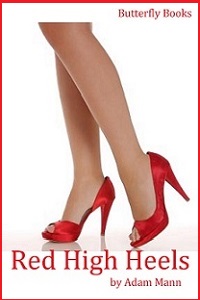 “Your red high heels remind me of a joke,” Roger said, and smiled at her.

“Go on,” she encouraged.

“There were two tramps and everyday in the evening they used to show one another what they had managed to collect during the day from various trash cans, or rubbish heaps.

“What did you get today?” asked one tramp, a man.

The other, a woman, looked a bit dejected, and said, “nothing, but what did you get?”

“I found these high heels,” he said producing from his sack a pair of shiny red high heel shoes, “would you like them?”

“I’ve nothing to give you in exchange,” the woman tramp said mournfully.

The male tramp said nothing, but left the shoes where the female tramp could see them.

“What about sex?” suggested the woman, as she quite fancied the shoes.

“OK,” said the man, and the woman interrupted to say,

“OK,” said the man again, and they made arrangements for the ‘sex’ to commence.

Suddenly the woman curled her legs around the man.

Roxanne, whilst Roger was telling this joke, had stood up and walked towards Roger’s bed picking up her red high heels on the way.

Roger tried to jump to his feet, but met Roxanne half way up, as she was leaning over Roger. She dropped the red high heel shoes on the floor…

Welcome to Beyond Romance, Adam!

Guys who write romance are a rare breed!

It sounds as though you've led quite an adventurous life, too.

By the way, I love the way high heels look, but I can't wear them at all. My feet are too flat. Maybe in my next incarnation!

My wife and 4 daughters all wear high heels, and they do look good. This morning I saw my granddaughter walking on her toes, and I asked why? Maybe she's doing some aerobics? She wants to wear high heels said her Mum! She's seven!