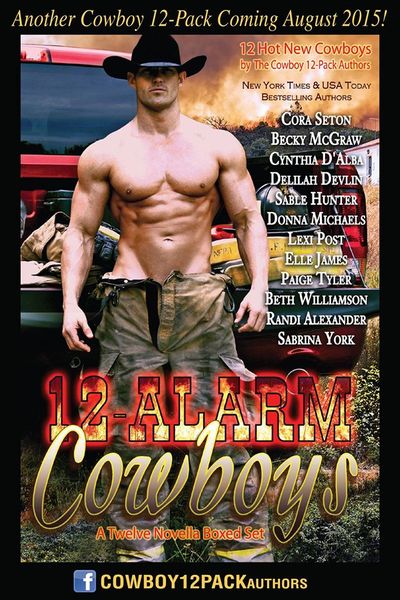 Following up on the stunning success of Cowboy 12 Pack, your favorite Cowboy authors have returned with another 12 scorching stories featuring cowboys…who are also firefighters!

AFTER THE FIRE by Cora Seton
When a series of fires keeps bringing him to her door, a firefighter must uncover his ex-girlfriend’s secret or risk losing her forever.

WHERE THERE'S SMOKE  by Becky McGraw
Cowboy Austin McBride follows a herd to a new town, but firefighting is his passion, so he applies at a local station. Standing between him and the job is a blonde bombshell who thinks she's a shoe-in.

SADDLES AND SOOT by Cynthia D’Alba
Rancher and volunteer firefighter extinguishes a grass fire accidentally started by the town’s sexy temporary veterinarian but there’s something about her that ignites a fire inside of him.

CONTROLLED BURN by Delilah Devlin
Rancher and volunteer firefighter assigns himself to watch a reformed firebug during a controlled burn but she lights the fire inside him instead of the dead grass around them.

HIS FIREFLY COWGIRL by Beth Williamson
When an arson investigator returns to her hometown she clashes with the firefighter cowboy who broke her heart. Embers turn to sparks between a cowboy and his firefly cowgirl.

HER VOLUNTEER COWBOY by Donna Michaels
Sparks reignite when one-nighters reunite. Can the firefighter/Guardsman convince the reforming bad girl she’s worth fighting for, or will she leave before he finds the courage to volunteer his heart?

COWBOY'S MATCH by Lexi Post
When a cowboy firefighter works a fire at a nudist resort, he’s sure his ex-girlfriend, the bookkeeper, is to blame. But as he investigates her, his gut tells him he’s going to get burned.

HELLFIRE, TEXAS by Elle James
A Cowboy-Volunteer Firefighter helps a runaway city girl put out a car fire only to find himself embroiled in a hot little mess of the mob persuasion.

REKINDLED (Dallas Fire and Rescue, Book One) by Paige Tyler
A hunky firefighter rescues his best friend’s sexy sister from a hotel fire set by her psychotic ex-boyfriend who’d rather see her dead than with another man.

TEXAS WILDFIRE by Sable Hunter
Honored VFD hero is no angel. In love with his Captain’s wife, all hell breaks loose when Titan learns Makenna is abused. The firestorm their love ignites is so intense no one will emerge unscathed.

HOT IN THE SADDLE – Randi Alexander
When a rancher/volunteer firefighter is injured saving the life of a female stockcar racer, she stays to pay her debt of gratitude. Will he regret risking his life when he learns why she came to Texas?

COME HELL OR HIGH WATER—Sabrina York
When offered a second chance to seduce his high school crush, Cade Silver cannot resist. The conflagaration of passion stuns them both, but Lisa Binder has been burned before and resists falling for the sexy cowboy/fireman. Cade, however, is a determined man. He will win her heart, come hell or high water. 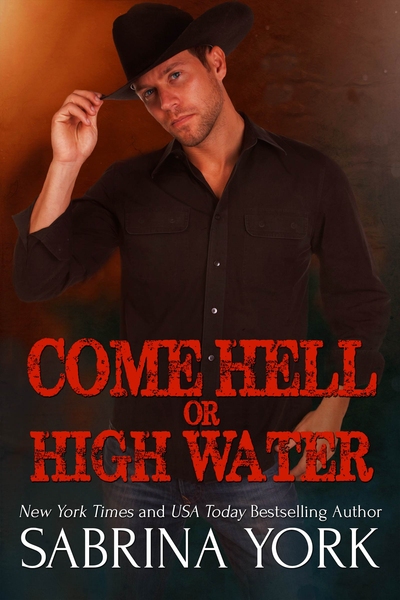 Back in her hometown on the heels of a nasty divorce, Lisa Binder is looking for a quiet place to curl up and lick her wounds. The last thing she wants is a man—she’s been hurt too many times by the faithless breed. But then Cade Silver steps through the flames, into her life and into her bed, and she begins to question her resolve to spend the rest of her life as a single cat lady. The tall, handsome cowboy/fireman—an Eagle Scout and military vet—seems to be the kind of man she’s always craved, and he seems to be fascinated with her as well. But can she trust him not to break her heart?

Cade has been a little in love with Lisa since high school, but when she started dating his much more charming and handsome brother, he was devastated. He left town and joined the Marines to avoid the torment of seeing the two of them together. Now, years later, he’s traveled the globe, survived multiple disasters and experienced loss. He is a man who knows what he wants and is willing to fight for it. And he wants Lisa. Now that life has given him a second chance to win her heart, he’s determined to prove to her he can be the hero she desires…come hell or high water.

He found her later when she was in the kitchen making cupcakes for Claire. A part of her had expected him to come. Another part had hoped he would. Still, she jumped a little as his deep voice wafted through the kitchen. “Were you checking out my butt?”

Her heart thrummed and she whirled around, holding her stirring spoon before her like a weapon. As though that could protect her from his raw allure. “W-what?”

He prowled into the room and leaned on the countertop of the island, his biceps bunching. He had his shirt on, but only in as much as it was draped over his shoulder. The sight of the broad slabs of his chest, that sprinkling of golden hair trailing down to his belt buckle, captured her attention. She tried not to gape. Really she did. He was gorgeous. Simply gorgeous.

The kitchen was a large and airy room. Still, he seemed to fill it up, heat it up.

“Were you checking out my butt?” he repeated. “Out there, in the yard?” Oh, she loved the playful lilt of his smile. That and the hint of vulnerability in his eyes, as though he didn’t know. As though he weren’t sure.

His smile dropped and her belly with it.

She hurried to add, “I was checking out your chest. I didn’t get to your butt yet.” She twirled a finger. “Turn around.”

He did, and he even waggled it for her, but he held her gaze. His glimmered.

It sent heat licking through her, heat that was probably too intense, at least for a guy she’d just met. Well, kind of just met. Really just met. She didn’t know much about him except he was damn hot, and a firefighter, and ex-military. And Cody’s brother. If he was like Cody, it probably wasn’t a good idea to encourage a flirtation with him—no matter how sexy she found him. In fact, it probably wasn’t a good idea to encourage anything with him—until she knew him a little better.

Still, she gusted a melodramatic sigh. “I knew it was a good idea to come and stay at the infamous Stud Ranch.”

He barked a laugh and then made a face. “None of that was my idea, by the way.”

“Yup. Cody. But I gotta admit, it did save the ranch.” He leaned over and peered at her work. “What are you making?”

His eyes lit up. “Seriously?”

She waggled the spoon at him. “For Claire.”

He watched her with puppy dog eyes as she spooned frosting into the bag and piped it on in a practiced swirl. “She’ll never know if you give one to me.”

“I’m pretty sure she will.”

His lip pooched out. God, it was a beautiful lip. She tried not to stare. “What kind of frosting is it?” he asked in a woebegone voice.

She grinned and scooped some from the bowl with a finger. Without thinking she held it out. “Wanna taste?”

His eyes flared. Muscles bunched. He took her wrist in a warm cuff and leaned forward and, easing her finger into his mouth…he sucked.

Too late, she realized her mistake.

She should never have allowed this man to put his mouth on her. For as he drew her into that warm, velvet cavern, lapping and nibbling on her tender skin—long after the frosting was gone—she realized she was an idiot for thinking she could just be friends with him. She was an idiot for imagining for a moment that she could resist his allure.

He was far too desirable.

Their gazes locked. A tumult, a conflagration passed between them. Without loosening his hold on her, he came around the counter and pulled her into his arms. And then, he kissed her.

Her Royal Hotness, Sabrina York, is the New York Times and USA Today Bestselling author of hot, humorous stories for smart and sexy readers. Her titles range from sweet & snarky to scorching romance. Connect with her on twitter @sabrina_york, on Facebook or on Pintrest. Check out Sabrina’s books and read an excerpt on Amazon or wherever e-books are sold. Visit her webpage at www.sabrinayork.com to check out her books, excerpts and contests. Free Teaser Book: http://sabrinayork.com/home-2/sabrina-yorks-teaser-book/ And don’t forget to enter to win the royal tiara!

My pleasure, Sabrina! You do a great job conveying sexual attraction. Good luck with the collection.