Today's snog comes from my holiday short "Easy". You can read the full story (which is not very long) over at my website.

In a way, this story rings counterpoint to my latest release, Slush. Both are narrated from the perspective of the hero. Both focus on the redeeming power of compassion. And both deal with homelessness - a special heartbreak in this season when we go home to our families.

I hope that you'll take the time to read the whole story - and to be grateful for your blessings, as the new year approaches.

After you've read my snog, head back to Victoria's place for lots more luscious kisses. 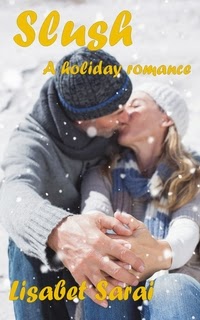 He started, the youthful voice pulling him from his drowsy stupor.

“Ah—um—good afternoon.” She was a beacon of color in the monochrome landscape, with pink cheeks, copper curls and a long, holly-green coat. A matching green ribbon held her fiery hair away from her face. She was young, certainly no more than twenty, with a freshness that made her seem old-fashioned. That coat reminded him of one his mother used to wear in the fifties, shaped like the letter A with those funny sleeves—raglan sleeves, they were called. He felt irrationally pleased that he could remember. His mother's coat had been a sober brown, though. This woman's garment was so bright it made him blink.

She stepped closer, out of the sleet, joining him under the overhang.

“Wintery weather,” she commented, smiling up at him. Her eyes were the same startling hue as her coat. Her lips formed a perfect bow. Even in the chill air, he caught a hint of her scent, cool and fresh like evergreens in snow.

He was suddenly aware of his own funky smell, his ragged clothing and his three days of stubble. He searched the girl's face for the inevitable sympathy or scorn. He found neither. Instead, inexplicably, he recognized desire.

She took his hand in her own small, bare fingers. “I know someplace warmer. Come with me.”

She drew him along the slippery path that circled the lake. Needles of sleet pricked his cheeks. His sweatshirt grew wetter with each step. In her cashmere coat and patent-leather boots, the woman seemed not to notice the weather.

Another spot of color grew before them. A Japanese-style bridge, rust-red, arched over the narrowest point in the hourglass-shaped lake. The trail crossed the bridge. He had never noticed the stairway leading down the bank. There was a ledge underneath, bordering the water, making a snug private space. He had to crouch down to follow her inside. The bridge swept upward, just over their heads.

“We're out of the wind here,” she told him, her voice like bells. “Let's sit down.” She slipped the coat off her shoulders and spread it over the dry stone.

He couldn't believe his eyes. Under the festive-hued coat, she was naked. Her skin was a creamy peach tone. The buds tipping her sweet, small breasts were a deeper rose. A ginger tangle at the apex of her thighs hid her sex. She looked like an innocent angel. Her smile as she reached for his zipper, though, hinted of lascivious delights.

“Wait—I can't...” His erection thickened by the second as she worked at his jeans but his shame was stronger than his lust. “Please, I haven't had a shower in a week. I smell...”

“I don't care,” she murmured, peeling the denim away from his hips and starting work on the sweatpants underneath. “I like the way you smell.” She gripped his rod. Her flesh was hot against his chilled skin.

She stopped him with a peppermint flavored kiss. “Because I want you. Now. I can't wait.” He surrendered, sinking back onto the soft wool, entwined in her arms.

I am on a loaner pc but I wanted to wish you a very happy and profitable new year and to say this is one fan who will be burning up the platic keeping up with your books lol , I would enter your contest for the new year but the loaner pc I'm on has the site blocked , but my new years res is to HUG everyone I love and care about at least once a day :)

Thanks so much! I'll count this comment as an entry to the VIP giveaway.

(Only members of my VIP mailing list are eligible. But I'd be happy to add anyone who wants to be included. Just send me email - lisabet [at] lisabetsarai [dot] com!)