Pick Your Path to Love

Have you ever wanted to take control of a story you're reading? Give it another ending? Have the heroine end up with the charming beta nerd rather than his annoyingly alpha friend?

Silkwords has pioneered a new, interactive technology that allows you to control the direction of the stories you’re reading.

With gorgeous custom covers and a clean, sophisticated design, the SilkWords site offers a secure, upscale reading environment. In addition to content on their web site, they offer stories for purchase in the standard e-book formats.

SilkWords is owned and operated by a full-time mom with a background in genetics and an RWA RITA-nominated, multi-published sci-fi romance author.

Their technology guy and site designer was the founder of Microsoft Xbox Live.

Silk Words features two formats that allow readers to choose how the stories will proceed.

Will she or won't she? With which man (or woman) in which location? With Pick Your Path romance, you decide. Romance and branched fiction are made for each other, like picking your favorite flavor of ice cream...positions, partners, and paraphernalia, oh my!

Reader Vote
Readers vote at choice points and decide how the story will continue. These stories are a great way for readers and authors to connect. It’s exciting to be part of a developing story!

Veteran romance and erotica author Erzabet Bishop has a new book out with Silkwords – Holiday Cruise. Erin goes on a cruise with friends, her first holiday away from home as a college student. She meets a female decorator and a man who will help steer her into some sexy holiday memories. 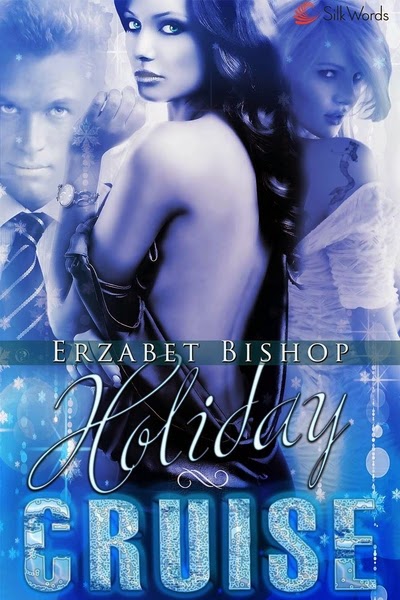 You can also buy the book in standard ebook formats at Amazon or All Romance Ebooks.

Here are a couple of excerpts to whet your appetite!

Erin Chapman stared out at the crowd, and her insides tightened. "Why did I let you guys talk me into this?" The tiny black wrap dress rested high on her thighs, hugging every curve. Her fingers fluttered along the bottom of the skirt, unconsciously pulling at the hem. The new four-inch black heels wobbled. For a second, Erin remained afraid she was going to topple over. She shifted her weight anxiously, resting her hands on the table as she waited with Jace for Nolan and the girls to show up. She listened to the pulse of the music, a lively upbeat version of "Jingle Bells," and it made her smile.

Her friends meant well bringing her on this weekend cruise, but she wasn’t really in the festive mood. They’d been good to her in her first foray into college and the big city. Just a year ago, she’d been trying to get into schools and obsessing about how to break things off with Dylan, her fiancé.

So get over him already and move on with your life.

"Why don't you sit down?" Jace patted a stool next to his at the tall silver bar-style table. "They shouldn't be too much longer."

Erin laughed. "Are you kidding? Somebody I know made this skirt so short, I'd be advertising my wares before my backside even made it to the top of the stool."

Erin rolled her eyes and tugged at the fastenings, making sure the dress stayed secured tightly, yelping when she saw the ties had almost slipped apart. Oh, god. That's all I need.

Jace slapped at her hand, a cross expression on his face.

"Girl, you’d better not wreck that dress. I have to turn that in for design class next week." He leaned in and kissed her on the cheek. "You’re divine. Go with it." His boyish features sported a shock of sandy brown hair and a muscular form that would have given the football players back home in Tyson's Grove a run for their money.

"I realize that, Jace." Erin smiled sheepishly. "I'm just not used to wearing something this um ... short." Erin brushed her long black hair out of her eyes and tucked it behind her ear. If she’d been thinking more clearly and hadn’t been so freaked out by tonight's last-minute invitation, she would have pinned it up or something. Now it was just going to be in her eyes all night. She gave a mental sigh and watched the crowd move to the music, envious of their fearlessness.

"You're doing me a favor. I want to see my new project come to life. Three years of fashion design, and I am going to get this one in the school show this semester." He brandished his cell phone, and a bright white light strobed outward.

"Jace!" Erin threw up her hands and slugged him in the arm. "Quit it!" Stars flickered behind her eyes as the flash momentarily blinded her.

"Nope." He grinned. "You're my star attraction tonight."

"I thought I was." Nolan stepped up behind him and wound his arms around his lover's waist.

"Hey, Nolan. Any sign of the girls?" Erin was thankful for the reprieve. Nolan remained the more studious of the pair. He was the one who’d answered the phone the day she’d applied for the room for rent. What might have been a horrific first time away from home was eased by the makeshift family the five of them had become over the last few months. She’d been terrified when she’d found out the dorms were already full. To find a room in the gorgeous Victorian house nearby had been total luck.

"Nope. Not yet. When I saw them last, they were working their way up the check-in line up on deck." Nolan pressed a quick kiss on Jace’s cheek and sent Erin an appraising glance. His firm mouth curled as if he was always on the edge of laughter, and the confident set of his shoulders never failed to communicate that he was an alpha male.

"Nice dress. It really is stunning on you, Erin."

Erin blushed, smoothing her hands down the front of the sleek black dress. "Thanks. Do you think it's too short?"

Nolan grinned, his arm around Jace. "With legs like that? No way. Come on. Live a little! Get out there and find someone to play with."

The flash of the camera was the only sound in the room.

"No ... here, turn toward me and bend down seductively and raise the hem of the dress up your leg. I want to see some thigh. Try to look innocent. Maybe a little beguiling."

Erin snorted. "Okay." She schooled her face to smooth out and did as he asked, her dark hair sweeping down, the bodice revealing her cleavage and the skirt rising to scandalous levels to show her creamy white thigh.

Another flash, and Alex was moving.
"Now I want you to go to the bed and lie down. Raise your hands above your head and hold onto the headboard."

Erin rose from the chair and made her way to the massive bed. There was a stool placed next to the bed so she could climb up. She settled in her spot, straightened the skirt around her legs, lay down, and reached up to grasp the headboard. 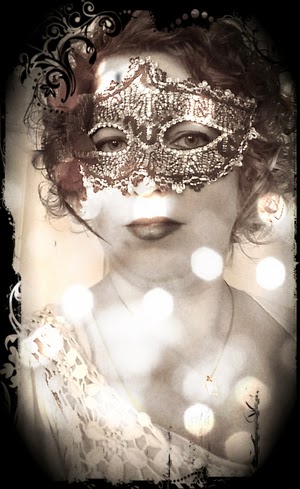 Erzabet Bishop has been crafting stories since she could pound keys on her parents’ old typewriter. She has only just learned that it is a whole lot more fun writing naughty books. She is a contributing author to the Silk Words website with her Fetish Fair, Gingerbread Dreams, Holiday Cruise and Temptation Resorts interactive erotic romances, Sci Spanks 2014 Anthology, Potnia, A Christmas To Remember, Taboo II, Forbidden Fruit, Club Rook: The Series, Sweat, Bossy, Cougars, Spank or Treat 2014, When the Clock Strikes Thirteen, Wicked Things, Unwrap these Presents, Unbound Box, Milk & Cookies & Handcuffs, Corset Magazine: Sex Around the World, Vaginas and Vulvas, Man vs. Machine: The Sex Toy Issue, Smut by the Sea Volume 2, Hell Whore Volume 2, Can’t Get Enough, Slave Girls, The Big Book of Submission, Hungry for More, Gratis II, Gratis III, Anything She Wants, Dirty Little Numbers, Kink-E magazine, Eternal Haunted Summer, Coming Together: Girl on Girl, Shifters, Coming Together: For the Holidays and Coming Together: Hungry for Love among others. She is the author of Lipstick (upcoming), Dinner Date, Tethered, Sweet Seductions: The Erzabet Bishop Collection , Red Moon Rising (upcoming), Red Boots (upcoming), Charity Benshaw's Enchanted Paddle Emporium (upcoming), Holidays in Hell (upcoming), Pomegranate (upcoming), Red Dress (upcoming), Sigil Fire, Written on Skin: A Sigil Fire Short, The Erotic Pagans Series: Beltane Fires, Samhain Shadows and Yuletide Temptation. Erzabet was a finalist for the GCLS 2014 awards in two separate categories. She lives in Texas with her husband, furry children and can often be found lurking in local bookstores. She loves to bake, make naughty crochet projects and watch monster movies. When she isn’t writing, she loves to review music and books.

Posted by Lisabet Sarai at 5:12 AM

Thanks for having me on the blog today!