How My Ideas Evolve

[Hi, Lisabet! Congrats on your 150th Sunday Snog. What great fun you've been providing readers! Thanks, also, for the way you're so willing to have authors on your Beyond Romance blog. (David Russell's post was certainly fun!) I appreciate your hosting me. Wishing you all the best for your continued success!]

I wish I woke up each morning with a gentle stretch and ideas for my books percolating along with my coffee.

Along those same lines, I wish for a genie to put the book together for me. It’s rare that a plot will arrive fully formed. Most times, I have a vague “what if?” question floating through my head. Sometimes a snippet of dialogue filters through my brain. (I tell myself all people have conversations with imaginary people.)

I have days, even weeks of sorting it all through. I have notebooks everywhere, random notes on scraps of paper, including junk mail and backs of receipts, and even restaurant napkins. I have a whiteboard in my office that vaguely resembles the operating instructions for the International Space Station.

One thing that’s been a challenge is exercising. I will get ideas on a treadmill, riding a bike, taking a walk. I was recently turned onto Evernote, and I immediately downloaded the program. The accompanying phone app allows me to scribble an idea on my phone using my fingertip. By the time I arrive home, the image is already on my computer. I’ll admit, sometimes it’s a real challenge to read my own writing.

Then I begin to outline the book. I’ll take about three pages and divide each into four sections to roughly correspond with the number of chapters. From there, I’ll filter in my ideas, my black moment, my resolution, sexy stuff that happens along the way. For some reason, the sexy stuff that happens along the way appears in a lot of sections. Just saying.

The actual book doesn’t always correspond with my original plan. Along the way, there are always events and emotions that surprise me.

Because of this, I have another set of pages that I fill in as I go. (I write these in a notebook, rather than keeping them on the computer. I’ve found it’s easier to keep the notebook open rather than flipping back and forth between files and hoping I remember to save them.)

Over the years and the course of writing dozens of books, the method has evolved. But two things have remained constant: the need for that cup of coffee and the desire to have a genie to magic it all together for me.

Blurb for Claim:
This is book two in the Bonds series, see the full series listing here 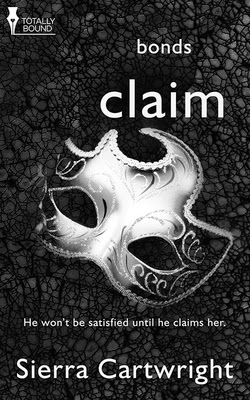 It had to be her. He won’t be satisfied until he claims her.

When they meet, he’s entranced by her intelligence and submission, not to mention her stunning good looks. For the first time, he has met a woman who captivates his interest on every level, someone he wants to share his life with.

Mackenzie is overwhelmed by Kennedy’s attentions. A failed marriage taught her to distrust men, and she’s vowed never to walk down the aisle again.

It takes all her resolve to resist the devilishly handsome Dominant. After all, the whole world knows of his legendary reputation with women. Every feminine instinct warns that this man will demand more than she can offer.
But she hasn’t counted on Kennedy’s determination to claim her and prove that love is worth any risk.

Sierra Cartwright was born in Manchester, England and raised in Colorado. Moving to the United States was nothing like her young imagination had concocted. She expected to see cowboys everywhere, and a covered wagon or two would have been really nice!

Now she writes novels as untamed as the Rockies, while spending a fair amount of time in Texas…where, it turns out, the Texas Rangers law officers don't ride horses to roundup the bad guys, or have six-shooters strapped to their sexy thighs as she expected. And she's yet to see a poster that says Wanted: Dead or Alive. (Can you tell she has a vivid imagination?)

Sierra wrote her first book at age nine, a fanfic episode of Star Trek when she was fifteen, and she completed her first romance novel at nineteen. She actually kissed William Shatner (Captain Kirk) on the cheek once, and she says that's her biggest claim to fame. Her adventure through the turmoil of trust has taught her that love is the greatest gift. Like her image of the Old West, her writing is untamed, and nothing is off-limits.

She invites you to take a walk on the wild side…but only if you dare.
You can find Sierra on Facebook, follow her on twitter and check out her page on Tumblr.

Enter Totally Bound’s competition for the chance to win a copy of Claim and two books from Sierra’s backlist: 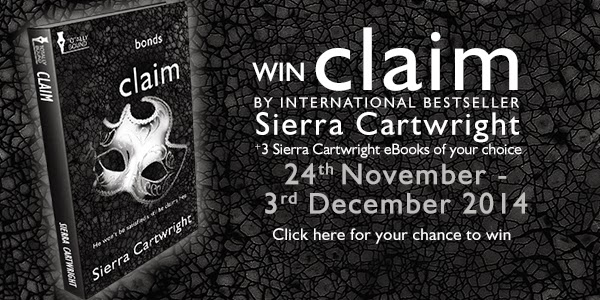 Hi, Sierra! Welcome back to my blog. I hope your tour has gone really well.

I'm off to announce this stop to my readers.

Lisabet - thanks for letting us know about Sierra's newest book.