Bang the Drummer! A New Way To Celebrate Christmas

With Christmas practically right around the corner, I wanted to share a taste of my newest Christmas story. Bang the Drummer is part of the collection The 12 Brides of Christmas from The Wild Rose Press – a spicy version of twelve drummers drumming! 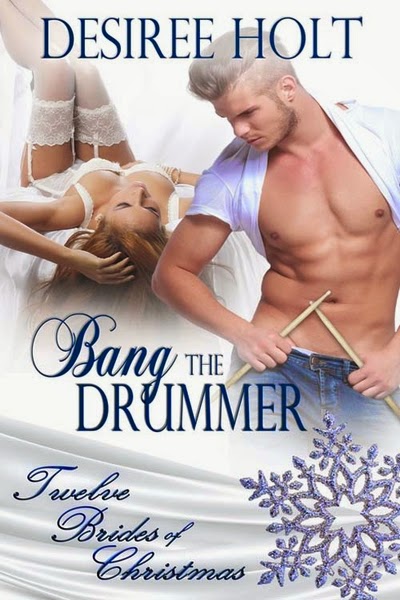 Jill Kennedy has plans for a Christmas wedding. She's put down deposits for the flowers, photos, and venue. Now all she needs is a groom. A drummer who'll keep her life as steady as he keeps the beat to his music. With her good friend Charlie Costello as her wingman, she'll interview percussionists, one per month until she finds the right tempo. But with Christmas approaching and no groom in sight, she's starting to wonder if she'll ever bang the drummer of her dreams.

Jill Kennedy curled up on her couch studying her iPad, frowning. Her Christmas tree still twinkled in the corner although the holiday was long past. Coldplay’s latest CD bumped its tunes out from her iPod docking station. The last of her Christmas candles flicked in glass holders on the coffee table, filling the room with the scent of pine and cranberry. She should be feeling mellow, but instead her nerves were jumping and a headache was creeping slowly up from the nape of her neck.

Charlie Costello lounged next to her, sock feet resting on her coffee table, his hands tapping a steady rhythm on his thighs in time to the song.

Jill tucked a strand of her shoulder-length sable-colored hair behind her ear as she studied the information on the iPad screen.

“I think I’ve got everything taken care of. Booked the Creekside Winery. Ordered the decorations. Set up a tasting for the food and Stella’s designing the wedding cake.” She glanced up at Charlie. “Why are you looking at me in that strange way?”

He gave her his familiar lop-sided grin. “You are the only woman I know who plans and pays for her wedding without knowing who the groom is.”

He threw back his head and laughed. “Yeah, I love your interview process. You aren’t even dating anyone right now.”

“Because look how poor my choices were in that arena, right?”

He snorted. “So this is better? Tell me how?”

Jill pulled up another memo on her iPad. “Okay. I have a list.”

If she didn’t need his help so badly, she would have smacked him. “It’s very specific. I asked around about different drummers in different bands and narrowed it down to the twelve most likely prospects. You know. Twelve drummers drumming, for Christmas.”

“No, Charlie.” Damn him! “Like an interview process for a job.”

“It’s a lifetime commitment,” she sniffed. She wished he’d just let her get on with this. All these questions were making her have tiny doubts about the wisdom of her decision. She gave herself a mental shake. “I’ll do one a month until I hit on the right one. The exact right one. First I check out their musical talent and their band history.”

Charlie gave a roar of laughter. “Because that’s such a requirement for stability?”

“Because it has to be a drummer so I need his performance history,” she snapped.

“Maybe it’s a different kind of performance you should be worrying about.”

“That comes later. After the phone calls and the coffee dates to see how he is in person and match our likes and dislikes.”

“Coffee dates?” He cocked an eyebrow. “Not even a romantic dinner?”

She wanted to sling the iPad at him. “I’ve been that route, remember? The whole nine yards, and what did I get? A bunch of losers. No, I’m doing this like a project for work. As a systems analyst, she knew the importance of things being able to mesh on a practical basis. ”

So you’re going to interview these bozos and then—what?”

“Drummers,” she told him. “Interviewing drummers.”

He cocked his head. “And that’s why?”

“I told you.” She blew out a breath of exasperation. “Drummers have the best beat. The best tempo. They’re the heart of the band.” She grinned. “And have the best rhythm in bed.”

A Recommended read from All Romance eBooks, the book is available now from all your favorite book sellers!

Desiree Holt’s writing is flavored with the rich experiences of her life, including a long stretch in the music business representing every kind of artist from country singer to heavy metal rock bands. For several years she also ran her own public relations agency handling any client that interested her, many of whom might recognize themselves in the pages of her stories. She is twice a finalist for an EPIC E-Book Award, a nominee for a Romantic Times Reviewers Choice Award, winner of the first 5 Heart Sweetheart of the Year Award at The Romance Studio as well as twice a CAPA Award for best BDSM book of the year, winner of the Holt Medallion, multiple winner of the Whipped Cream Book of the Week Award and is published by five different houses. Romance Junkies said of her work: “Desiree Holt is the most amazing erotica author of our time and each story is more fulfilling then the last.”

And I LOVE the cover!

Thanks for sharing with my readers.