So here's a quick kiss from the title story. City girl Audra's boyfriend dumps her barely twenty four hours before her planned thirtieth birthday extravaganza. Her sister insists that Audra fly out to her New Mexico ranch instead, to party country-style. Audra agrees - with no idea what she's getting into.

And of course, when you're done here, don't forget to visit Victoria's Sunday Snog page and check out the sexy kissing excerpts from all your other favorite authors! 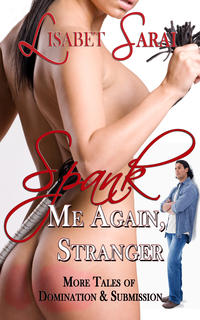 Audra stumbled off the stage and pushed her way through the cheering crowd. The pressure in her swollen pussy and the ache in her punished ass were her only realities. She had to get away, find some privacy, give herself some relief.

The ladies' room was outside, behind the building. Audra followed the signs. She practically burst into tears when she found the one-person facility was occupied.

She couldn't wait. Slipping into the shadows, she crumpled her skirt to her waist and yanked her panties down to her knees. The fabric scraped over her pummeled ass. Damn him! She wouldn't be able to sit down for days. The perverse thought just made her hornier.

Spreading her thighs wide, she plunged two fingers into her slick hole while settling her thumb against her clit. Pleasure arced up her spine. She squeezed her eyes shut. “Yes...” she hissed. “Oh, yeah...” She was on the brink already – right where that bastard had left her. Her clit spiked up, engorged and hungry. She worried it back and forth, rubbing furiously. No time for teasing. She needed to come, right now.

Her climax gathered, winding tighter, drawing closer but still out of reach. The wail of a bass guitar leaked into the night as someone opened the door of bar. He was in there, playing his music as if nothing had happened, while she pinched her clit and ground her fist into her cunt like a maniac. Damn him, she'd make him pay, she'd make him...

“Let me do that.” A massive man-shaped silhouette blocked out the stars. Giant hands gripped her shoulders while full lips settled on hers with a decisiveness that both enraged and excited her. She tried to resist but it was like fighting a hurricane. His tongue teased her mouth open despite her determination to keep it closed. He nibbled her lip then nuzzled her throat, his whiskers far softer than they looked.

He smelled of cheap bourbon and clean sweat, with hints of sagebrush and thyme. While her conscious mind continued to seethe with anger, her body surrendered completely. His big fingers replaced her desperate ones, delving into her juicy pussy and driving her up the slope to orgasm. He seemed to know what she needed - just as he'd known how she'd react to his blows on her ass.

When he dragged a blunt finger over her clit, she exploded at last, pinwheels of pleasure spiraling out in all directions. He held her tight while she jerked and shuddered, sealing her mouth with his own to suppress her cries. Then, as her paroxysms died away, he unzipped and drove his cock into her fluttering depths, triggering a second crisis.

I love, love, love the cover! Kind of wish the guy wasn't there so that I could just see the woman's figure.

Thanks for the except--who doesn't want a "daddy" like that to help when you need it most?

Hot, hot, hot. I love her complete surrender and his bourbon and sweat smell. Not to mention his blunt finger. ;) Can't wait for the book!
Tamara Jane

What a delicious excerpt! I agree with Tamara Jane. Love the part about the cheap bourbon and clean sweat. Fabulous, Lisabet.