“Coitus” of all things!

Perhaps that ever-present feeling of disconnectedness is why I turned to books at such a young age. I devoured science fiction novels by the dozens, classics, historical fiction, contemporary, nonfiction myth and legend—you name it. This constant stream of mental stimulation made up for an ostensible lack thereof surrounding my childhood home.

The books turned me into one of those children. A precocious child. An insufferable brainiac.

Yet, what’s funny is that I never asked my parents any of the normal questions. Or, more precisely, the normal questions one would expect from an avid science fiction/classics/historical fiction reader. I’m sure my mother and father cursed the Gods—and often—for their luck. Instead of “Daddy, why aren’t there people living on the moon?” there would be “What’s an orgasm?”

I was about six when I asked. He replied calmly (against his better judgment), “Go look it up.” A few minutes later, I stomped back to here he read contentedly and, visibly agitated, I demanded, “What’s coitus?”

I also remember the dinner party a few years later, where I proudly explained to my aunt that my new favorite word was “salacious.” “Do you know ‘salacious’ means?” I glowed with pride. (I’ll be honest—I thought it meant “beautiful.”)

“No sweetie,” she said accommodatingly. “But let’s look it up.”

She led me over to a large, oak bookshelf, the kind that was built into the wall, and then hefted a large, red Merriam-Webster down to the floor so both of us could lean in close and look together. “Lustful. Ooohh my,” she said thoughtfully, after having flipped to the right place.

I smiled brightly, clueless as to what “lustful” meant.

Darn those dictionaries for using complicated words—at least I thought they were complicated at the time—to describe what should be down-and-dirty, insanely pleasurable, natural—often animalesque—moments.

So when I became an erotica author fifteen years later, it was no surprise. To anyone I know.
I’ve been writing for as long as I can remember, but in fact, my first “published” novella was released just two weeks ago from Total E-Bound publishers (there’s a link to read a synopsis and purchase at the end of this post).

My fascination with technology is a result of my background and (of course) my age. Between 2009 and 2011, I was enrolled in a graduate program at Georgetown University where I earned a Master’s degree in Strategic Communications and New Media technologies. The beauty and complexity of the digital world, to me, is tantalizing (perhaps even hotter than sex!). I decided to explore a sexual fantasy that springs, not first from physical attraction, but from a complete lack thereof. In fact, the attraction itself exists only in the imagination, at least in a digital world. Makes sense—with online dating, sometimes you’re not even sure what your date is going to look like! It was a challenge: could I write a book about texting and sexting and make it hot? And encourage people to read it? I don’t know. You tell me.

Forthcoming is another story entitled, “Sorry, Bro,” about one young man’s struggle with his sexuality and, ironically, the sexuality of his best friend. This one was especially fun to write, as many of the characters were based, very loosely, on college friends and acquaintances. It’s also set in my second hometown of New Orleans, which is the quintessential setting for any story about inner search, renewal, and passionate sex. I’ll keep you updated as the story develops.

In the meantime, I’d like to personally thank you for reading and for your interest in my work! To learn more about me and my writing, please visit my author page. My personal blog is still in the works. 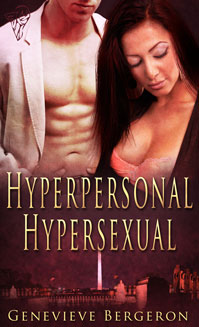 Juliette Bresson won't wait around for 'the man of her dreams'. That's because the heroine of Hyperpersonal/Hypersexual, knows that fantasies hardly ever manifest the way we intend.
Instead, Juliette—an energetic university instructor and savvy political consultant—imagines her men exactly how she wants them, and she forgoes real sex altogether. But eventually starved for tangible love and romantic excitement, Juliette replies to a string of anonymous yet provocative emails and instant messages she receives in response to an Internet forum post. She suddenly finds herself the recipient of a barrage of oversexed texts, salacious instant messages and requests for a face-to-face meeting. Finally, after a tantalising sexual encounter with her digital admirer, Juliette begins to think that real sex can be too good.
Now afraid of ruining her reputation, losing her job and her focus—or worse—Juliette must decide whether to give herself permission to love a lying man, a man who can fulfil her every sexual fantasy—or reject him altogether and cling to dreams that seem perfect but are really only mediocre, at best.

Welcome to Beyond Romance! I was precocious too - but never to THAT extent!

Congratulations on your first book - may it be the first of many!

Congratultions on your release, Genevieve! I hope it's the beginning of many more to come.
Latesha

Congratulations on the release, Genevieve!

Congratulations on your release Genevieve. My boys have all made the mistake of asking me curly questions, then been embarrassed by my frank reply.

Hi Genevieve ~ and big congratulations on your release. I loved your blog entry. I live not-terribly-far from Hunstville, and went to college in New Orleans - and am headed to DC for a visit next weekend! - se we are sorta kinda neighbors. Your book sounds fabulous. :)

Wow, six years old when you asked the definition of coitus. I thought my son asking at 13 was bad. That was a really weird day that led to lots of really strange questions. Like your family, I insisted we get the dictionary definition first. Afterall, you want your facts straight! Congrats on your first book!

Thanks for the note! You know what they say--it's a small world after all. Tulane or Loyola?

For the life of me, I still can't understand why our dictionary defined "orgasm" using something so scientific as "coitus"! Thanks again, Jen.

Sounds like you are well on your way. The best writing aid is a good attitude and a vivid imagination. Keep on plugging, your childhood sounds a lot like mine. Though I will admit it was quite some time before I found the realm of naughty words. Perhaps someday, some of my "adult" stories will come to light. Good luck and happy writing to you! =0