What's in a Name?

Since becoming published there's been one question I've heard over and over: Where'd you get that name? I suppose I shouldn't be surprised when people ask me what Concilium means, or Cruor Imbibo. They aren't names that top the cutest baby name charts.

Concilium is Latin for "Council." The council is a group of beings in the book that act as guardians. Their main objective is to keep the Imbibo under control before they slaughter humankind. When I selected the name I knew I wanted a name that meant council and I knew I wanted it in a very old language. I played around with different variations on the word council and different languages before settling on Concilium. And the title of the manuscript was born. 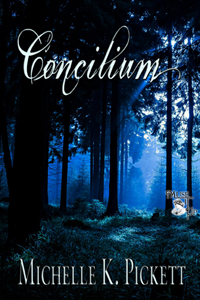 The monsters were a little harder. I knew after I selected the title I needed to keep with my Latin origin for their name, but I wasn't sure what to name them. With the help of my husband and son we came up with a suitably gross name which translated into Cruor Imbibo. I refer to them in the book as the Imbibo. I'm not going to tell you what the name means. You'll have to read the book…or find a translation website and translate it yourself. But I suggest you read the book. It's more fun to find out their name in the context of the story.

When it comes to naming characters, the names usually just present themselves to me. For instance, I was trying to decide on a name for the hero. Nothing seemed to fit. Then one night I was watching a movie with my husband and one of the movie's main character's (last) name was Miller. I knew right away I had my hero's name. It just slid into place like a puzzle piece. Of course, the actor with the name Miller was Matt Damon and you can't really go wrong with him…moving on.

Then there are the names I use as a way of recognizing a person, place or thing. Generally only I know what they are, but sometimes other people, especially my family, will pick up on them. For example, in Concilium there is a character named Flynt. I grew up in Flint, Michigan. There is a character name Alex. My childhood dog's name was Alex. There is a person who really ticked me off one day, no, I'm not going to tell you his or her name, but they are killed off in Concilium's sequel. No one would probably make the connection between the person and the character (unless they are reading this), but I know it's there. So you can see how these things have a way being almost cathartic. On one hand I'm able to pay tribute to a person and on the other hand I'm able take out my revenge—if only on paper.

Sometimes I use names because of their meanings. My young adult paranormal manuscript I have on submission is a good example. The story centers on a teenaged girl who is half human and half angel. Muriel, her best friend and cousin, is also half angel. The name Muriel just happens to be a Judeo-Christian name for angel. Lilith is another character in the book who is half angel. She betrays the other angels and aligns herself with the demons. When you look up the meaning of the name Lilith you'll find that it is associated with a figure in Jewish mythology that is believed to be related to a class of female demons—the perfect name for an angel who joins forces with the devil.

PODs, my YA novel releasing June 4, 2013 through Spencer Hill Press, is an acronym. In the novel, "The Chosen" are sealed underground in the PODs while a lethal virus claims the lives of those living above. The name PODs stands for Populace Obliteration Defense system.

So what's in a name? Sometimes quite a lot. I like the names I use to mean something to me personally or to the story in general. In PODs the seventeen-year-old main character who is locked in the PODs is named Eva. It's a play on Eve since the world is dying and being reborn it needs a new Adam and Eve. In the book it has Eva.

Relating character names to the story or people, places or things makes the book and characters seem more alive to me.

Can you think of any characters whose names had a deeper meaning to the author or the story? What character/book was it?

Thank you, Lisabet, for hosting me on your blog today and letting me share a little about how I select my character's names. It was great fun being here and I hope to visit again. And, of course, my blog is always open to you. I'd love to have you visit.

Leslee hit a strange animal with her car. Now she’s marked for death.

It was a simple car accident – the animal didn’t even die – but it drew the attention of the Cruor Imbibo. Driven by their insatiable need to feed, the secret society of Imbibo has devoured the dregs of civilization for centuries. Afraid Leslee will expose them, and put an end to their meal ticket, the Imbibo want her dead.

The Concilium is Leslee's only protection. Guardian of the ancient secret and the protector of humans, the Concilium fights to control the Imbibo and end their feeding frenzy. Miller works for the Concilium.
Keeping Leslee alive is his next assignment.

Now Leslee is on the run, and the only thing between her flesh and the snapping jaws of the Imbibo is Miller. He and Leslee quickly form a bond, but will falling in love make Miller’s job more difficult?
Because if he fails, Leslee will be next on the Imbibo menu.

The Cruor Imbibo are coming, and they're coming for Leslee.


Tired of them talking as if I wasn’t there, I did what they wanted and went inside. I thought about locking Miller out. But I didn’t. It wasn’t because I wanted to spend the evening alone with him like we had spent that afternoon. It wasn’t...

I sank deep into the cushions of my couch and waited for them to finish their work. Grabbing the remote, I flipped on the television, surfing the channels. Nothing was on. More than two hundred channels on the stupid thing, and nothing worth watching. Irritated at the television, at Miller, at the whole situation, I hurled the remote against the door.

“Crap,” I muttered when it fell to the floor in pieces.

“I think you killed it,” I heard Miller say behind me.

My stomach did a little flip-flop, and I cursed it silently. “Yep, I certainly put it in its place. It won’t be talking back to me again. I wish I could do the same with you.”

His lips pursed into what almost looked like a grin. “You think you’re the one to put me in my place, Leslee? You, just a slip of a girl? I doubt it.”

“Don’t mock me, Miller. I meant that I’d like to throw you across the room,” I snapped. “I just might surprise you. And I’m not a ‘girl.’ Girls go shopping at the mall for flip-flops and lip gloss. And, for the last dang time, my name is Les!” I walked around him, my shoulder brushing slightly against his arm. As I caught the faintest whiff of his cologne, not only did my stomach do a flip-flop, but my whole insides swirled out of place.

What is it with this man?

I barely knew him. In fact, the only thing I did know was his first name. At least, I thought it was his first name. What was this thing I had going on? A schoolgirl crush? I was twenty-five, a little old for crushes. And besides, Miller wasn’t the type of man I was attracted to. I didn’t go for the mercenary, guns-and-ammo type. I enjoyed the company of well-read college graduates who had stable jobs and good heads on their shoulders.

Holy crap, I sound like a snob! A stable man with a stable job. What a joke.

I secretly wanted the bad boy. What woman didn’t? Miller didn’t seem to have one stable thing about him. But he smelled so good and looked beyond gorgeous standing in my living room with his hair, mussed from running his fingers through it, falling over his forehead.

Yeah, I was doomed.

I trudged into the laundry room and grabbed a broom and dustpan. When I walked back to the living room, Miller was picking up pieces of the demolished remote.

“Fine.” He dropped the pieces, and they clattered against the wood floor. “Suit yourself.” He walked over and eased himself down on the chair across from the couch. “And you’re right. You did sound like a snob, and you should find yourself a nice stable guy and have a nice stable life, with perfectly stable kids. Bad boys are called bad for a reason.”

“It’s a bad-boy thing.” He flipped on the television. “Sure wish I had a remote. I forgot how tedious it is to channel surf without one.”

You can buy Concilium from MuseItUp Publishing or at Amazon. 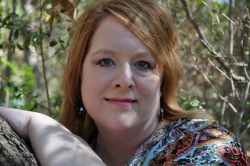 Her debut young adult novel, PODs, will be published by Spencer Hill Press and is scheduled for release in paperback June 4th, 2013.

Michelle was born and raised in Michigan. She now resides in a small community outside Houston, Texas with her incredibly supportive husband, four wonderful children, a 125-pound lap dog, a very grumpy cockatiel and a cat that thinks she's queen.

Trailer: http://youtu.be/dxLvVQ9s7u4
Posted by Lisabet Sarai at 4:00 AM

Welcome to Beyond Romance. Concilium sounds amazing! I've never been able to write convincing horror, myself. I'm too much of a wimp!


Good luck with the book.

Picking names can sometimes be fun. In my book "Cop with a Wand" the head bad guy (until he gets killed) is named Julian Cadavru and he has relatives who also go by the name Cadavru. Well, "Cadavru" is Romanian for "corpse." Had to do a bit of hunting to come up with that one, but it seemed appropriate.

Good morning! Thank you so much for hosting me today. My book is on the lighter side of horror, so I suppose I'm a little wimpy, as well. :)

Hi, Jim. That's the kind of thing I love doing! Even if the meaning of the name never comes out in the story, it makes it meaningful to us. In Concilium Leslee's last name, Nusquam, means "Nothing" in Latin (if I remember correctly - it's been a while I'd have to look at my notes to be positive). Anyway, I had a scene written where it was used in the book. Well, that scene ended up in the circular file so no one ever saw it but me, but it was still fun coming up with the name and knowing what it meant and how it related to her character.

First off, I want to say this looks like a great read. Knowing a bit of Latin, I know what Cruor Imbibo means. It sounds right up my alley, so-to-speak.

Good luck with your new release!

Not a horror/paranormal specialist (though I've 'dabbled' a bit from time to time!)
Names for the 'bad guys' in my stories are easy enough to dream up: I simply think back to my childhood and pick a name from the endless list of School Bullies I encountered as a child - and in later life as a school teacher for almost 30 years. It's an ideal opportunity to get your own back!