An Interview with Koll and Gilby from MATING SEASON 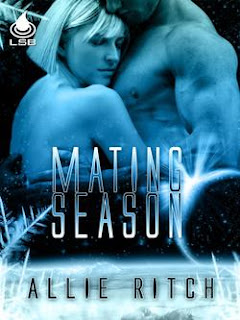 Mating season on the arctic planet of Jensen is a time for eligible men to winter with a potential spouse. In the past, Koll’s big size and gruff disposition have scared off many available women. When Shila literally falls into his arms, he hopes maybe this year will be different.

Shila belongs to a race of shifters who are able to transform into enormous frost bears. She loves Koll’s large body and sexy growl, and she understands the benefit of having a strong protector. With two male shifters stalking her, she needs Koll to keep her safe. But can he defeat the competition?

Interviewer (female): “Hi, Koll. Thanks so much for meeting with me today.”

Gilby: “Hello, there. We’re happy to be here. In wintertime, we don’t get to meet a lot of new people in our village. Only a couple of traders who come through, and not many of them. I’m Gilby, by the way. I can’t help but notice you’re not wearing a man’s ribbon in your hair. Does that mean you don’t have a mate for the winter? Are you available?”

Interviewer: “Um…hi, Gilby.” Shakes head. “So, Koll, I understand you searched for a long time to find a woman to winter with you.”

Gilby: “A really long time! My friend here isn’t exactly good with females. He thinks his big size scares them off, but I say it has more to do with his lack of social skills.”

Interviewer: “But you’re happily mated now, aren’t you, Koll? To Shila. She’s part of a race of frost-bear shifters, isn’t she?”

Gilby: “Her people are called the Children of Nanook. Shila says they were like us villagers when they first came to this planet, but the bacteria here made them sick. Their leader, Nanook, merged his spirit with that of the native frost bear, leading the way for the rest of his people. Koll and I grew up hearing stories about the Children of Nanook, but we thought they were just a myth. Then Shila came along. You should see her when she’s a bear. She’s huge! Big claws, scary teeth, snowy fur.”

Koll: “My mate is beautiful.”

Interviewer: “I’d love to meet her. I’m sorry she couldn’t join us.”

Koll: “Shila is roaming. She doesn’t like being cooped up inside for long.”

Gilby: Shivers. “It’s freezing out there. Me, I prefer to stay inside where it’s warm. And where there are people to talk to. Where did you say you were from? Are there lots of women in your village?”

Interviewer: “Okay. Thank you, Koll…and Gilby. Best of luck with the rest of the mating season.”

Gilby: “I’ll walk you out. Wouldn’t want you to trip and fall into a snow drift or anything. Let me tell you about the time I…”

[The door shuts behind them.]

After popping off her snowshoes, he got her tucked securely under the furs before climbing on behind her and pulling up the brake. With a low grunt of sound, he signaled Greyfell to run, and the hound immediately obeyed. They shot forward, heading homeward once more. Koll stayed alert for danger, only stealing occasional glances at the beautiful woman in his sled.

The extra weight slowed their travel. It was closer to dawn than dusk when they finally reached his house. Koll carried the woman inside and laid her on his bed before stripping his gear and seeing to Greyfell. The hound’s head reached Koll’s chest, giving him a clear view of the animal’s large black tongue as he panted. He stripped off Greyfell’s protective boots and rubbed him down with a towel before settling the hound in the kennel attached to the house.

Then Koll built a fire before returning his attention to his new guest. When he’d planned to bring a woman here, this wasn’t quite what he’d had in mind. She was still sound asleep and probably would be for hours. He needed to get her out of those wet clothes, a thought that aroused him and made him feel awkward at the same time.

After what she’d been through, he wanted to tell her that he meant no harm. As much as she stirred his body, her vulnerability moved him and made him want to comfort her. He should have told her she was safe. He should have promised his help immediately when she’d asked. At the time, he’d been so focused on assessing the threat he hadn’t thought to offer her reassurance. Hadn’t he learned that females needed gentle words?

“Stupid lout,” Koll grumbled to himself.

He wasn’t good with words, but he could have said something. No need for poetry.

Lifting one of the extra fur blankets from the foot of the bed, he held it in front of him like a shield as he walked toward the woman. The firelight bathed her like sunrise and brought a rosier hue to her skin. Very carefully, he laid the blanket over her lap, though she was still covered by her leather pants. He propped her up with one arm while he used the other to peel off her wet coat and toss it aside.

One down. That was the easiest part.

Her sweater beneath was damp and clung to her skin. She was not a scrawny creature; she was heavy-boned and lushly curved. Not fat—she was built of surprisingly hard muscle for a woman—but she certainly wasn’t dainty. Sturdy was the word that came to his mind.

Pulling the blanket higher, Koll covered her chest with it while he wrestled off her top. He groaned when he brushed his callused hand over the bare skin of her back. She was so damn soft. Soft and smooth and delectable.

His erection punched his fly so hard he winced. With a death grip on the blanket, he kept the covering in place, though what he really wanted was to let it drop. He ground his teeth in determination and protected her modesty as he lowered her torso back onto the bed. Stepping back from temptation, he moved to her feet.

Koll had never paid much attention to a woman’s feet before, yet he found himself captivated when he bared hers. They were beautifully shaped, arched in the right place, and just as smooth and pale as the rest of her. And they were big. Although they weren’t absurdly so, her feet were definitely very large for a female. He must be going mad because that turned him on even more.

Unable to stop himself, he slid the blanket up her long, endless legs. Of course they probably only seemed lengthy because she was so tall. He was pretty sure she was proportioned longer in the torso, but that didn’t matter. There was just so much of her to explore, and every part had fresh heat racing to his cock.

By the time he had the blanket to her waist, his hands shook. He fumbled with the fastening of her pants and felt as if he were gasping for air as he dragged the leather down along with her underwear. At the last possible moment, the blanket hooked on her belt and slipped down to conceal her privates. It stopped at the top of her thighs while he slid the material the rest of the way down her legs and off her toes.

Koll was sweating with the effort it took not to reverse course and slide his palms over her naked calves and thighs. His gaze was fixed on the shadow between her legs—a glimpse of paradise denied him by the outcropping of blanket just barely blocking his view. One flick of his finger and he could take a peek. Just a peek to see if her hair there was as white as that on her head.

Thanks so much for having me on your blog, Lisabet. I'm thrilled to be here.

Yeah, Gilby just had to get in on this interview. It's probably for the best since Koll doesn't talk much.

Sci-fi and paranormal romance are my two favorite genres, so I had a blast combining them in this book. The cover art I owe to artist Valerie Tibbs. She did a great job, and the cover really makes a first impression. Glad you enjoyed my post, Lisa.

LOL, don't we all have Gilby's in our lives? Great character interview, Allie. Loved the interplay between Koll and Gilby.

love the excerpt and being born in Dec. made this read even more enjoyable not many writers think to write about the winter time ,wonder why that is?

I have to say, I had a lot of fun writing about Gilby in this book, A.R.

Helene, I hadn't thought about it before, but you're right. You don't see too many winter settings except for holiday books. Thanks. I'm happy you enjoyed the excerpt.