A Need to Tell Stories

Originally I was going to write a “how I write” guest blog, but on reflection I decided to write “why I write.”

I mean, who wants to read of a 58 year old divorced grandfather living in an efficiency, doing all of his writing at a folding table, while “The Fall of the Roman Empire” DVD plays on a small TV with the sound off, while listening to Lady Gaga, and sitting cross legged on a bed? (There’s not much furniture in an efficiency in a small apartment complex for homeless veterans, and sitting for a long time in a chair bothers my legs.)

First, of course, is potential riches! Though it’s not impossible I might someday be the next Stephen King or Tom Clancy, or Hemingway or Steinbeck…but, well, let’s not go there.

Second, there’s a compelling desire, a need, to tell stories. Though I’m not well off by any means, if I never received a dime, there are stories I want to tell. I don’t know why, but the unwritten characters and their worlds inhabit my dreams, they knock at my door with the persistence of the minions of a loan shark (I live in Las Vegas, you know), and they peek over my shoulder, wondering if I’ve started writing about them yet. I think that most of you who read this blog understand what I mean.

Once I’ve decided on the next story I want to tell, the research can be fun and interesting. For example, for a story that takes place in space, or on the moon, it’s fascinating to learn how a space suit is put together, and how it functions. For a story that takes place in a World War II B-17, it’s equally fascinating to learn of the various uniforms and equipment utilized to protect the crew, especially the waist gunners, from the freezing air at 36,000 feet.

And then, there’s the research needed when creating a new, and believable, world in which armies of opposing kingdoms war against one another, and wizards and witches advise kings and queens. It’s time to visit the library and search the shelves for books on classical history, and even prehistory (I utilize the Internet almost exclusively, but there’s a lifelong appreciation of books). Whether reading of the Mongol Empire, the early Germanic kingdoms, or feudal Japan, the reading fuels thoughts and the imagination. Before very long the rough outline of an undiscovered landscape takes shape. It’s a landscape filled with great and small kingdoms, nomadic barbaric tribes, and even the ruins of long forgotten civilizations. It’s a landscape from the distant past, or perhaps the distant future.

Or, perhaps the landscape is the here and now. Through this landscape move shadowy descendants from a forgotten past of whom we are unaware, unless they choose to make their presence known. And then begins the mystery and the adventure that ordinary people are sometimes drawn into.

Yes, though I may never be rich or even well off, there is a desire to write, a need to write, and to tell stories. I wouldn’t have it any other way. 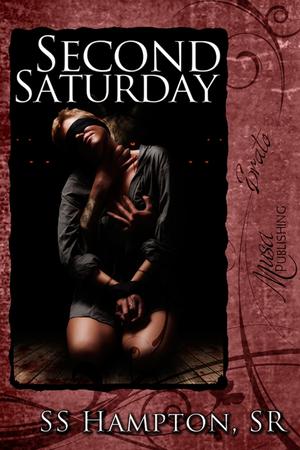 Sharon Rogers is a young university student in Las Vegas, working part-time at a nearby donut shop. She is hard at work one morning when Patricia Renner enters the shop--and Sharon's life. Not long after meeting Patricia, Sharon begins dreaming. Sharon turns her dreams of male and female warriors with wolves' heads into sculptures. When Sharon and her fellow art students band together to host an "art crawl" for the public, she invites Patricia to attend, hoping to seduce her. However, Sharon discovers that Patricia is intent on seducing her; not only that, Patricia is very territorial and will not permit rivals for Sharon's hand. Patricia has a secret, though, and Sharon must accept it if they are to be together forever.

Sharon Rogers opened her eyes and stared at the darkness of her bedroom ceiling with the echo of the tremulous howls still ringing faintly in her ears. Many times before, she had dreamed of powerful warriors; men and women, who ran with giant wolves across moonlit steppes. With the fading of the dream she felt an unexplained pang of loss.

As a matter of routine, Sharon woke very early; when she wasn’t a starving university student, she worked part-time at the Mom and Pop Donut Emporium not far from the university. Baking and icing trays of donuts and serving coffee was her momentary purpose in life.

Though she had the day off, she grumbled about having such an early rising job—in spite of the Ground Zero recession with so many Las Vegans out of work—and went back to sleep. When she finally awakened, she lay naked in her large bed and stared at the whirling ceiling fan.

It was Saturday, the first “Second Saturday” for the Maryland Parkway Salon, as the local group of university students called themselves. The students who lived in the weathered apartment buildings had spent two months planning this art crawl. For a few hours, the public could visit apartments where art work was for sale, help themselves to refreshments in the sandy lot between the buildings, and visit with the artists in their workshops at the back of the lot.

If Second Saturday was successful, they planned to hold more art crawls every couple of months.

But for Sharon, Second Saturday had the potential to be much more than an art show.

First, there were the more than a dozen foot-high clay figures that she had sculpted and fired. The figures were of naked men and women with wolves’ heads—warriors armed with shields, spears, and swords. As an artist, Sharon appreciated the human male and female form, and she loved wolves. The two subjects complemented one another, reinforced by dreams she’d had. She was hoping to sell one or more of the figures.

Second, was the boorish Rodney Boatman, a sometime-patron at the donut shop. He was a delivery driver for a local company. He hit on her frequently, never taking no for an answer. When he saw the flyer announcing Second Saturday, he had promised to show up and take her out for dinner and drinks afterward. She dreaded his possible appearance.

Bio: SS Hampton, Sr. is a Choctaw from the Choctaw Nation of Oklahoma, and a divorced grandfather to 13 grandchildren. He is a published photographer and photojournalist. He is a member of the Army National Guard, a veteran of Operations Noble Eagle, and Iraqi Freedom, and he deployed to northern Kuwait 2006-2007. His favorite genres are horror, science fiction, erotica, sword & sorcery, fantasy, and military fiction. His writings have appeared in The Harrow, Ruthie’s Club, Lucrezia Magazine, and River Walk Journal, among others. Currently his work is published by Melange Books, Musa Publishing, and MuseItUp Publishing, while various short stories have appeared in anthologies from Dark Opus Press, Ravenous Romance, and later this year, Edge SF & Fantasy. As of December 2011 he technically became a homeless Iraq War veteran.

Now I want to watch The Fall of the Roman Empire again.

Thank you for visiting. And yes, "The Fall of The Roman Empire" was a great movie. I still remember watching it the first time when I was a kid.

Welcome to Beyond Romance, and thanks for sharing your passions with us. Second Saturday sounds really intriguing.

Good luck with your writing.

No problem. Thanks. And thanks for having me as a guest blogger.