I grew up with a beloved stepfather who, as a very young man, had come to the United States from a Dirty-War-torn Argentina. He lived with us for years before he dared a return visit and when he did I remember the tension and worry adults in our circle tried to hide. My stepdad shaved his beard, cut his hair, so I scarcely recognized the man we left at the airport. The weeks he was gone were twisted and cold, like waiting for bad news. He made it back to us, to my mother’s relief, but I didn’t believe it was really him until our rented house smelled like his pipe tobacco.

To this day, nearly forty years on, Gardel tangoes and a certain strain of pipe smoke excite an exile’s nostalgia in me, though I never have escaped a beloved homeland.

As a teenager, I joined a local chapter of Amnesty International (this was back in the pre-internet days of potluck meetings in strangers’ living rooms). I think part of me wanted to save the man-boy my stepfather had been before he left Buenos Aires that first time. It was foolish and romantic of me, of course, and futile, but slowly I learned I was doing some good with my earnest letters to unknown bureaucrats and colonels.

I majored in Anthropology in college, traveled to Kenya and Cuba and America’s Native Nations. Had a son and named him for my stepfather. Earned a Doctorate in Making Things Better. I took a job in the Ivory Trenches (an urban community college) and embraced their social justice mission with the same eager resolve I’d applied to those Amnesty International Urgent Action letters thirty years ago.

And I started to write. I did it for fun, for myself, as a reward for bulling through grad school and escaping a bad union with my mind and children intact. I came out, proudly. I wrote from a place of strength and discovery and wonder. And I started to notice something.

In story after story I wrote, my characters were Strangers in Strange Lands. They were exiles and outcasts and wandering seekers. Even those characters whose stories played out in their imagined hometowns were singing songs of longing and loss. They were singing the exile’s lament. (This isn’t to say I don’t write lighthearted, silly stuff too, but if you look closely, the lament is always there.) All my stories also feature Queer characters, and there’s an element of the exile to those of us on the sexual-minority spectrum, don’t you think? Geopolitical exiles must leave their homelands in order to survive, and Queer folks too often live in socio-political exile within their homelands, so they’re not the same thing. Not really. But there’s more in common there than I ever realized before I started writing fiction.

At the risk of becoming maudlin (I confess more than a few tears fell as I remembered) let me just say how exhilarating it was to discover Alessia Brio’s Coming Together volumes, and to have a story accepted into Coming Together: At Last which benefited Amnesty International. The story itself was inspired by a pastel by Michael Breyette, entitled “Pride.” Exiles we may be, but to join with fellow travelers and lift our voices together transforms the exile’s lament into a song of hope. 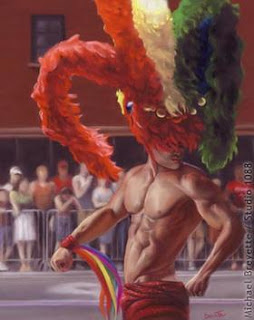 Here’s a description of and not-work-safe excerpt from “Proud Is the Dancer, Pride Is the Dance,” from Coming Together At Last, Vol. 1:

When Danny discovers his lover, Cuban exile Calyx, was once an internationally renowned dancer, he thinks he's found the key to reviving Calyx's lust for life. Calyx resists, tormented by his memories of persecution and torture. Danny discovers that Calyx has lost more than his homeland and his vocation – he's also lost his connection to the Santería tradition that sustained him in his youth. They struggle to bridge their cultural divide and with the help of friends and their city's upcoming Pride celebration, they both realize that their connection to each other is the real key to choosing to live, rather than merely to exist.

Undulating with Calyx inside him was the most complete Danny had ever felt, as if his lover’s body joined with the little piece of Calyx’s soul Danny carried around with him always. He wondered if Calyx felt the same way.

“Mi amor, ay, mi vida,” Calyx chanted as he rocked, those elastic hips of his showing Danny the edge with each shift, but never tipping him over.

Danny’s responses were inarticulate at best. He arched his back, canted his hips, reached over and over for bliss. He squeezed his muscles around Calyx’s prick, over and over again, until they were both grunting indelicately, coming endlessly.

“You killed me, mi amor,” Calyx sighed as he pulled out gently and rolled over.

Boneless, Danny agreed with a breathy chuckle and wrapped his arms around his panting lover. He closed his eyes, just for a minute…

…and woke with a start. Late afternoon sun slanted through the window, gilding Calyx’s dulce de leche skin. A glance at the clock confirmed Danny’s fear.

“Hmm? No, nene, it’s early. Rest with me.” He snaked his arms around Danny’s middle and sank deeper into the mattress.

Those molasses eyes gazed up at him for a long moment. “It’s perfect, to sleep the afternoon with you. I could kidnap you, tie you up and keep you here.”

“You’d never,” Danny said, smiling inside and out at Calyx’s words. He loved it when Calyx teased. Loved it when he woke up slowly and happy instead of suddenly and terrified. Most days, Danny would have indulged his lover, grateful for a peaceful awakening, but he really was late for work. He played his trump card: machismo: “The ladies will be disappointed if I don’t show up. I’m teaching them about small business loans today.”

With an exaggerated groan, Calyx levered himself up, rubbing idly at his smooth belly. “Bien, mi amor. I will take you to work. Shower first?” That last was said with such lascivious hope Danny had to laugh.

“Separately, you tempting thing. I’ll never get to work if I get wet with you.” Danny grabbed a clean shirt and headed down the short hall to their tiny bathroom. 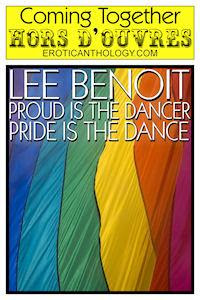 Bio: Before dawn and after dark, Lee Benoit is a writer of queer fiction, some contemporary, some speculative, some historical. During the daylight hours she is a professor of sociology & anthropology. In the old days, Lee traveled the world doing field research. Nowadays, she lives in the middle of a New England hayfield where being a two-spirit single parent provides more than enough excitement. Lee also paints watercolors, bakes wild-yeast sourdough bread, rears guinea fowl, and shares her bed with a pair of cats and an abjectly adoring hound-retriever mutt. Whenever she gets itchy feet and misses the world of research and advocacy, Lee invents a new world in her head and takes notes on what happens there.

Buy “Proud Is the Dancer, Pride Is the Dance” as a single title: http://www.allromanceebooks.com/product-proudisthedancerprideisthedance-417340-144.html

Or buy the original Coming Together: At Last, Volume 1: http://www.allromanceebooks.com/product-comingtogetheratlastv1-411318-144.html

Commenters to this post will be entered in an additional random drawing to receive a PDF copy of any one of my backlist titles (barring my Coming Together story). Please be sure we have a way to reach you in case you’re the winner. My thanks to Lisabet for hosting this amazing month of guests!

Email ThisBlogThis!Share to TwitterShare to FacebookShare to Pinterest
Labels: Coming Together At Last, exiles, Lee Benoit, Proud is the Dancer Pride is the Dance

Thanks for introducing yourself and sharing an excerpt.
And thanks for the chance to win one of your stories!!!

You're a new to me author and I loved learning about your background. The photo in your post is gorgeous and gives a great sense of celebration. Great excerpt too that makes me want to read more.

Thanks to you and all the other authors for a wonderful month of fun! Thanks too your generosity in all the prizes being given away and I wish everyone good luck on winning the big prize (although I'm crossing my fingers the most...lol)!

Your post and excerpt both have so much texture to them. Thank you for the vivid memories, and I agree with joder that you included an awesome photo.

And it's been an incredible month for me, too. It's great to get to know other Coming Together authors. Thanks to Alessia, and to Lisabet for hosting.

What a wonderful way to end the bash! The pastel is gorgeous - I can definitely see how it would inspire you.

Amnesty International is dear to my heart, too. I'm so proud to have a story in "At Last".

Thank you for sharing your work and your history.