“Don’t kill the messenger,” people say, and yet that’s exactly what I want to do most times I’m confronted by a request for charity. I’m mad that someone has interrupted my dinner with a phone call, rung my doorbell for an awkward debate I’m not ready to have, or asked me for change on the street where I’m embarrassed if I choose not to give.

I don’t even know if I fit with a lot of organizations devoted to good causes. I feel too dirty for them sometimes. I say “fuck” way too much. I actually fuck way too much, in too many perverted ways.

This is where the naughty angels involved with Coming Together save the day. Donate to a good cause and get a book of hot stories? Sign me up. That’s not money I’m thrusting at someone to make them go away and stop making me feel guilty. It’s money I’m using to buy something I want, and then I get to feel good about myself as a bonus. My dirty mind becomes an asset, not a liability.

You can’t be part of something like this without feeling a sense of pride in it, followed by a sense of responsibility. I think of myself sometimes as a sort of prodigal child of Coming Together--maybe not as committed as I ought to be, maybe not as passionate or able. No one has kicked me out, though. Every time I get it together to put something into this, people have welcomed me.

Coming Together’s approach offers a messenger I want to kiss, not kill--stories I want to take to bed at night, people I look up to. These people show me there’s no need to feel so inadequate. There’s plenty of beauty and altruism in sex, plenty of goodness, plenty of sacrifice, and plenty of times that joy spills over with lots to spare for all.

And this brings me to my excerpt, from “The Hunt,” which appeared in Coming Together: As ONE, a collection of menage stories that benefits ONE, the campaign to end global poverty.

A long-standing fantasy of mine served as the foundation for this story. I called it “the bridge fantasy.” I imagined being the conduit through which two others expressed their love for each other. My body would be the canvas, but the sex act would stretch beyond me. 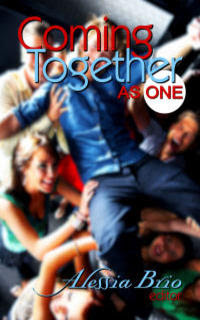 We came once again to Artemis’s secret place in the heart of the forest. Intoxicated by the heady scent of the goddess’s body, we dismounted just outside the clearing. Theron took my hand before we passed through the undergrowth and onto the wet brown earth beside the pool.

She appeared then, her body deadly and glorious. She wore nothing but bow and hunting knife. Her eyes flashed at our intertwined hands. I pulled away from Theron, but she stopped me with a gesture. “I won’t be jealous,” Artemis said, her voice large as battle but still soft as a flower. Theron fell to his knees, pulling me with him.

“Rise and come here,” she said to me. When I obeyed, she took me in her arms. The pleasure of her touch pounded through me, too strong for my body. “I will know the touch of no man,” Artemis purred. “But my Theron deserves some reward. Give him this for me.” She bent her head and kissed me full on the mouth, her sweet tongue pressing my lips open and slipping into me. I would have fallen, except the goddess held me up and pushed me into Theron’s waiting arms.

Trembling, I wound both arms around his neck, letting him support my weight. He shook, too. Even in the full presence and terror of Artemis, I smelled Theron’s body and longed for him. I gave him her kiss, and a little of mine, too.

His eyes on the goddess, he caught his breath, still holding me, and said, “If the goddess will accept it, I would have you repay her this in turn from me.” Theron loosened my robe and let it drop from my shoulders and into the mud. He picked me up and wrapped my legs around his waist, then lifted my breasts to his lips, kissing and sucking on the nipples. I groaned and ground against him, my blood thudding in my ears. At last. I didn’t mind being a vessel for her, as long as he touched me that way. When he set me on the ground again, I turned back to Artemis in a daze. Her eyes flashed, but she nodded her permission, and I took her nipples in my mouth one after the other, nibbling them gently as Theron had nibbled mine, trying to transmit to the goddess every nuance of the lips and teeth I had dreamed of for so many nights.

I ferried caresses between them for what felt like hours. I trailed kisses down his chest for her, ending by dragging teasing fingers up both his thighs. For him, I pressed my lips to the insides of her elbows, the flesh behind each knee, and the place where her neck met her shoulder. I vibrated with the touch of mortal and immortal alike, until my mind thrummed with pleasure and power. My fingers explored Artemis’s sex, as Theron had explored mine. I didn’t think I could walk another step. Artemis made me lie down in the earth beside the pool and beckoned Theron closer.

“Look at me, but do not touch,” she said, this time to him. The goddess looked down at me then. “Do you give yourself to me and him?” she asked. I swallowed hard and nodded. Artemis settled her sex over my face, her scent going straight to my head. I gripped her thighs with both hands and opened my mouth wide to her, letting my nose press into her opening as I suckled the hard nub between her legs. She gasped and laid her hands over mine, squeezing. A moment later, I felt Theron probing the wetness between my legs, then replacing his fingers with his long, hard cock. The sensation as the two consummated their love through me filled me more than to the brim. I forgot myself as man and goddess gasped above me.

I think the orgasm started in Artemis, but it passed from her into my mouth and down my body until I shuddered and rolled my hips up to meet Theron’s thrusts. Then it caught hold of him, too, and he clawed at my hips at his own release. Almost before Theron finished pouring out his seed, Artemis disappeared, leaving us alone in each other’s arms, and yet not lonely. 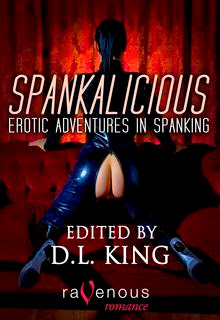 Annabeth Leong found relief in erotica. Reading others’ stories opened up a world of freedom and exploration. Writing it increased the thrill. Since her first published story in 2009, she has written for anthologies by Cleis Press, Ravenous Romance, Coming Together, Forbidden Fiction, and Circlet. Her novella, The Six Swans, is forthcoming from Coming Together: Neat. Her work has appeared online at Every Night Erotica and Oysters and Chocolate. Besides freedom of speech, Annabeth loves shoes, stockings, cooking, and attending concerts--probably in that order. She lives in Providence, Rhode Island. She can be found on Twitter @AnnabethLeong, and blogging at annabethleong.blogspot.com.

Email ThisBlogThis!Share to TwitterShare to FacebookShare to Pinterest
Labels: Annabeth Leong, Coming Together: As One, Spanklicious

Thank you for the excerpt...

Yet another wonderful excerpt! I particularly LOVE hearing how the story came about and look forward to what you have coming up next.

Thanks so much, Michelle and joder -- it's great to hear from you!

I loved this story when I first read it in AS ONE. I've always viewed sex as aligned with the spiritual and you've made this beautifully concrete.

Love the Spankalicious cover, too...!

Thanks for the chance to win!
brandon_savannah@yahoo.com

I agree with Lisabet about the Spank cover--really great, lighting, colors, and of course, subject. :)

Love the excerpt and the cover is wonderful too.

What a unique story. Thanks for the excerpt and the chance to win one of your stories!

Thanks so much! I'm so glad for the opportunity to be here!

Thanks for the additional comments, everyone! I'm so glad you all enjoyed the excerpt!

And for the Spankalicious giveaway, I've drawn Menina as the winner! Congratulations! I'll get in touch by e-mail. I really appreciate everyone's participation.