A Valentine for One Person, and the World

There’s a truism among authors: “Write to please yourself first.” It works, as far as it goes, but for me, it’s not enough. What I find works best for me, is to have one particular reader in mind, and write to please both of us, aiming for the spot in the Venn diagram intersection between another’s desires and my own. There’s connection there, a link between me and that one specific reader that gives the story a heart right from the first draft.

“Actual Size” was written for a woman who goes by the name of “Cunning Minx” online. She’s a podcaster like me, host of “Polyamory Weekly” and an avowed ‘boobiesexual.’ She has revealed that one of her favorite scenes is to have her face buried in a woman’s bountiful bosom while a strong man gives her a round spanking. I thought the scene was interesting, so I decided to give it some fictional context.

Much of my own interests lie in the worlds of various transformation kinks; that’s why I used transformation as the theme of my Coming Together anthology, “In Flux.” I found the scene that Minx had in mind to be a natural fit for the ‘breast expansion’ subset of the transformation fetish.

‘Breast Expansion’ is one of those little fetishes that has grown (so to speak) in the fertile ground of the Internet age, now that people can share and express their desires without having to worry too much about what outsiders will think. It’s a simple fetish, just what it says on the tin; boobs getting bigger--MUCH bigger. There are a few websites devoted to it, here and there, and on any forum devoted to sexual transformation you’ll likely find discussions of this particular subset. The very first story I ever sold, “The Nefarious Plot of Professor Bolster,” was published at a website devoted to breast expansion. It’s not my only kink by a long stretch, but it’s one I like to return to once in a while.

When the story was done, and my beta readers and I had fine-tuned it, I asked Minx to give her voice to the story in my podcast. To my delight she agreed, and found the story much to her liking. To this day I find it one of my listener favorites, and I believe that this connection between myself and this one particular reader to be the foundation of the appeal of the story. Because of this connection I believe it transcends interest in the breast expansion fetish, and becomes something that many people can enjoy.

An excerpt from “Actual Size” from Coming Together: In Flux: 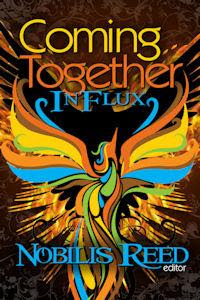 Diane's apartment was in a luxury high-rise in Crystal City, just around the corner from the metro station. When I got to the lobby, Diane was waiting for me, dressed in a floral print sun-dress. She waved me over to the elevators.

"Aren't I supposed to sign in?" I asked, as the doors closed.

"Why all this secrecy?"

The elevator stopped and a teenage kid with a telescope stepped on. He smiled nervously and turned toward the doors. Diane said nothing. When the doors opened at Diane's floor, she hurried down the hall to her door and let us in. With the door closed and locked behind us, Diane relaxed visibly.

"Is everything okay? Is Drake having you followed?"

Diane crossed the room and pulled the curtains across the floor-to-ceiling windows and their view of the Washington skyline. "No, just wait. You won't believe me until I show you, anyways." Diane looked like she was on a stage, standing on the proscenium. She closed her eyes, tilted her head back, and took a slow, deep breath.

At first, I couldn't tell what was happening. but after a few seconds, it became clear. Diane's chest was swelling. It wasn't just her chest expanding with the air she was pulling in. Her breasts were actually getting bigger. Flesh appeared at the sides of the long triangles that made up the top of her dress. The waist rose as the volume underneath pushed out on the top of the dress. Cleavage occurred.

"No implants. All natural. All me."

I pressed on them with my fingers, on top, on the sides, underneath. Even a gentle squeeze yielded no clue of artifice. "These are real!"

"I think I need a glass of wine," said Diane, suddenly.

"Sorry." I disengaged and ran my hands over my skirt.

"No, it's okay. I'd probably do the same myself. Actually, I did. Rather a lot, actually."

I couldn't help noticing how Diane's chest bobbed and swayed as she walked over to a wine rack and selected a bottle. Every movement seemed to echo in her massive bosom. Diane came back with two very full goblets, and handed one to me.

"So how is this possible?"

"I don't know...exactly. Drake is a stage magician. He also does hypnosis. We were playing around with it one night, making me think I had really big boobs, and, well, this happened."

"So why all the secrecy?"

"Could you imagine what would happen anyone found out? I'd be locked up in a lab somewhere."

"You're probably right." I took a long drink of the wine, draining nearly half the glass.

"I think it might be magic," said Diane. "My grandmother said one of our ancestors was a swan-maiden. I wonder now if she might have been right."

"Swan-maiden...you mean she could become a swan? Like in Swan Lake?"

"Yes. A kind of a shape-shifter, like a werewolf." Diane looked down at her chest and smirked. "And swans do have rather large chests."

I took another drink of wine. My curiosity was getting the better of me. "So how big can you make them?"

I finished the wine and looked Diane in the eye. I spoke softly, too nervous to speak any louder. "Show me?"

Diane plucked at the fabric of her dress. "I won't be able to stay in this."

My heartbeat threatened to deafen me. "I don't mind if you don't." I could feel a flush coming to my face, embarrassment but also arousal.

"What the hell. I've never been able to show anyone. Might as well show off." Diane sat down on the sofa, downed the rest of her wine, and set the glass aside. The knot holding up the top of her sun-dress came open with a moment of fiddling, and the fabric fell down around her waist. Her breasts were full and round, not the way badly-implanted breasts looked, with that unnatural curve across the top, but they didn't droop either. These were impossibly perky without looking fake. She stroked her breasts idly, and smiled at me. "I take it you... like... women?"

"I tried it once, in college. It was nice, but I'm pretty sure I'm straight."

Diane's eyes sparkled as she smiled, running her hands underneath her breasts and lifting them, as if making them an offering. "You don't look straight right now."

I realized that my hands had strayed to my own breasts, and that I could feel dampness growing between my thighs. I longed to bury my face between those orbs of flesh, stroke their soft skin, and lose myself in the cleavage. A tingle ran through my body. I swallowed and tried to smile. "I know vegetarians who say pepperoni is a vegetable."

"Well then, my hungry vegetarian, let's not wait any longer." Diane leaned back, closed her eyes, and cupped her breasts with both hands. Once again, there was a kind of thickening in the air, an electric scent, and the skin under her hands swelled. Her complexion got paler as her breasts slowly grew beyond any size I had ever seen before, beyond anything I had ever even imagined. A minute passed, two, and they became bigger and bigger, until they came down below her ribs, and then her navel, and finally touched her thighs. Diane's pink nipples, which had become easily an inch thick and two inches long, were almost out of the woman's reach, and her skin had turned nearly completely white.

I could hardly breathe. It felt like my heart was beating a hundred times a minute. I knew I wasn't supposed to feel this way. The display was supposed to be absurd, even grotesque, but I was more turned on than I had felt in months.

The spanking comes a bit later in the story. If you would like to see how that turns out, pick up Coming Together: In Flux from All Romance Ebooks. It includes stories by Shanna Germain and Angela Caperton, among many others. It has superheroes, steampunk androids, transhumanism, werewolves and immortality clones. Even if this particular excerpt doesn’t spin your bottle, the sheer diversity of this anthology should leave you with something that will touch you in a way you never expected.

Bio: A few years ago Nobilis Reed decided to start sharing the naughty little stories he scribbled out in hidden notebooks. To his surprise, people actually liked them! Now, he can’t stop. The poor man is addicted. His wife, teenage children, and even the cats just look on this wretch of a man, hunched over his computer and shake their heads. Clearly, there is no hope for him. The best that can be hoped for is to just make him as comfortable as his condition will allow. Symptoms of his condition include two novels, several novellas, numerous short stories, and the longest-running erotica podcast in the history of the world.

Thanks, Nobilis! I love your kinky mind. :)

Thanks for the glimpse of your writing style & the excerpt...

Intriguing post with an eye catching excerpt. Thanks for giving us a glimpse into your background.

Thanks for the term "boobiesexual." Also, I love the banter in the excerpt. "You don't look straight right now." Excellent!