Do Not Adjust Your Screen

Greetings from the wind-swept Canadian prairie. I’m Jean Roberta. My respectable day job involves teaching the rules of grammar to university students in first-year English classes which are mandatory for most. When I’m not grading essays, however, I squeeze into a virtual bustier and write about sex, or review sexy stories by other writers.

I had already read about Literotica, the site where the “Coming Together” concept originated. Before the year 2000 or thereabouts, there were so few sites for literary writers who wanted to explore the human condition through the lens of sex that we were like residents of a small town who all knew each other.

As a long-term leftist-feminist and member of various gay/lesbian/bi/trans organizations, I had racked my brain to think of effective ways to raise funds for events such as GLBT (or LGBT2-Spirit, Genderqueer) Pride Week. Selling advertising in the local Pride Guide and holding a silent auction of donated items was the traditional way to finance Pride Week, but this required both legwork and a certain chutzpah. (Imagine introducing yourself to the managers of small businesses by identifying yourself as queer or deviant by conventional standards.)

Selling stories about sex seemed like such a great way to fundraise for good causes that I wondered why no one had ever thought of it before Alessia Brio and her colleagues from Literotica. 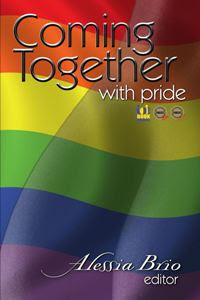 When I first heard of Coming Together: With Pride, I was working on a fantasy story set in the near future. I sent the story in, and was delighted when it was accepted for the anthology, which raised funds for AVERT, an organization for the prevention of the spread of HIV/AIDS.

My story, “The Personal Is Political,” was based on several what-if questions I asked myself:

In my story, Prime Minister Crapper and her spouse Paulette visit London, England, for the centenary of that fateful Derby. Paulette is a history professor who has access to some very private letters in code between Emily Davison and the woman with whom she was having a secret affair.

Paulette learns something important about what happened in Emily’s life before the day of the race. In the meanwhile, however, she wants to comfort Margaret for being ambushed by a conservative interviewer on television earlier in the day.

What better distraction from the political issues of the day than wholesome, marital, lesbian sex? Do not adjust your screen. You are about to enter an alternative version of the near future.

Paulette knew that Margaret wasn't really interested in revisionist research. She was breathing down Paulette's neck as she held her from behind and tweaked her plump nipples through her dress. "Read me, honey," said Margaret. "Read my fingers and my arms and my mouth and my wet twat and my hot breath." She stuck a tongue in Paulette's ear. "I'm not in code."

Margaret wanted to shift Paulette's attention, and she did. Once again, she enabled Paulette to feel voluptuous and desirable and glad to be where she was at that very moment. Both women were well aware that the past is every historian’s Demon Lover, especially when dressed up in seductive new clothes. Sometimes Paulette loved being seduced into staying present in the here and now.

Paulette turned to face Margaret. The heels of Paulette’s shoes didn’t seem high enough, so she stood on tiptoes to reach Margaret’s mouth. Paulette kissed her fervently, prompting Margaret to make a sound in her throat and hold her wife tightly enough to keep her at the right level.

Paulette’s nipples were still very alert from Margaret’s attention. “Too many clothes,” mumbled Paulette, and Margaret certainly agreed with her.

Margaret turned Paulette around to unzip her dress, and Paulette let it drop to the carpet, pushing her half-slip down with it. Paulette let Margaret’s gaze linger on her turquoise satin bra with matching panties and garter belt before she pulled everything off to expose her hungry skin to the air.

Margaret had already shed her suit-jacket, but Paulette knew that she was more efficient at such things, so she took over the job of getting her spouse out of her clothing as quickly and neatly as possible. In a trice, both women were rolling naked on a bedspread, feeling like naughty children.

“D’you think—“ gasped Paulette – “Felicity Friend [television interviewer] wanted you to slap her? I think she was flirting in that 'shut me up' way.”

Margaret snickered. “If so, she was out of luck. I already have a luscious wife.” She ran her hands possessively through Paulette’s hair, claiming its silkiness. Paulette reached for Margaret’s small breasts, not wanting them to feel neglected.

Margaret held Paulette’s wrists and gently pushed her down on the bed. “Just let me this time, honey. All right?”

Paulette moaned, sinking into the mood as though into a pile of swan’s-down. “In that case, Mistress, will you use the cuffs?”

“Oh baby, I didn’t bring them. I didn’t think we could run the risk of any of our toys being found here. How’s this? You have to hold onto the bed frame and if you let go, you’ll be punished.” Despite her tone of command, Margaret looked concerned. Paulette knew that she was the one person Margaret could afford to trust completely. Margaret didn’t want to lose a particle of Paulette’s trust in her.

“Yes, Ma’am.” Paulette gracefully reached up beyond her own head to find the bed frame and curl her fingers around it. “Forgive me for asking you to expose yourself to your enemies. This hopeless girl needs to be put in her place.” Paulette wiggled her hips as vigorously as possible in a horizontal position. “I’m such a slut I can’t behave properly.”

Margaret guffawed. “A minute ago, I could hardly lure you away from Emily Davison. You probably do need a reminder of what I want from you. Mm. You’re asking for it.” Margaret nuzzled Paulette’s pillowy breasts, then licked a wet ring around the nipples before sucking and nibbling them.

Margaret’s tongue left a wet trail down Paulette’s sensitive, gurgling midriff to her deeply-indented belly button. Margaret ran her hands firmly down Paulette’s sides, then tickled her tummy, challenging her to resist the impulse to let go of the bed frame. Paulette squirmed, laughed, and rose to the challenge.

She wondered how long it would take her spouse to find out how wet she was between her legs.

Margaret hovered like a bee circling a flower. She stroked Paulette’s plump thighs, held them apart and dipped an experimental tongue between Paulette’s outer lips. Margaret nipped at the tender ivory skin above the curly brown bush which glistened with moisture. “Mistress.”

Margaret grinned. “What do you want, baby? Tell me.”

“By just anyone? Should I bring in one of the maids?”

“Maybe I should come in somewhere else first.” Margaret tickled Paulette’s puckered asshole with a long finger. “This opening has been neglected for awhile.”

Paulette continued to squirm and Margaret continued to tease until she eased two fingers into the deep, narrow channel of Paulette’s sex. Her fingers made a slurping sound that satisfied both women.

With tidal slowness, Margaret pushed in and withdrew, in and out as though she couldn’t imagine a reason to speed up. Paulette squeezed, pumped and wrapped her legs around Margaret’s waist.

Margaret disentangled herself, casually stood up and reached for her purse. She returned to bend over Paulette with something in her hands.

“Ohh!” Paulette immediately clamped her upper lips together to hold in all the wild sounds she wanted to make. She clung to the bed frame like a shipwreck survivor clinging to a life raft. Her hips jerked as her sex spasmed. “You said no toys!” She was desperately trying to keep her voice low.

“None except this one. It’s a conventional household item, don’t you think?”

An image of Margaret in a courtroom, functioning as Crown Prosecutor, flashed into Paulette’s mind. Margaret had been good at leading the jury down one path, then veering onto another, keeping the defense off-guard. She was a wily strategist on her own turf, and Paulette had learned to love her ways of stalking and capturing an elusive victory.

With help from my more tech-savvy spouse (my female partner of 22 years), I was able to create a collage of my book covers, with my photo and my signature, which became part of the Coming Together: Against H8 autograph book project, which raises funds for NoH8. 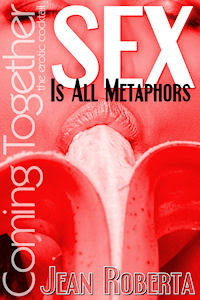 I'm so happy you're part of Coming Together's family, Jean!

Thanks for the excerpt...enjoyed reading it...

Thanks for giving us an opportunity to win one of your books!

You're a new to me author but I'm intrigued by the excerpt you gave us. I'll definitely be on the lookout for more of your books.

Great story and great sex, as always. It's nice to see you here, Jean.

Vibrators totally _should_ be conventional household items, in my opinion. I love the cover of Sex is All Metaphors--recently picked up a copy. Thanks for the post and excerpt!