When I wrote the story "My Right Breast", I had one family member diagnosed with the disease. Thankfully she underwent radiation and continues to be in remission. Writing the story was my way of helping, albeit secretly since this particular family member probably wouldn’t appreciate a story with sex and spanking. I was what you’d call a covert supporter.

Since that time, I’ve had another family member undergo a lumpectomy for suspicious cells that turned out to be benign. Tragically, we lost a family member to colon cancer only a year after Coming Together: For the Cure was published.

I’ve started to feel the specter of cancer looming over my shoulder, leering at the people I love like some kind of deranged jester. I want that bastard to fuck right off. I don’t know about anyone else, but if I can do something to keep that jester and his tricks at bay, I’m going to do it. I’ve got asthma so I don’t run marathons for fundraisers. When I saw the call for Coming Together, a little bell rang in my head. Writing a hot story with a sexy fireman and his hot-headed ginger? Well, that I could do!

That’s why I’m proud to be a part of the Coming Together crew. These authors and editors have donated countless hours to the causes these books benefit. I can’t say enough how glad I am to have been a part of a book that continues to raise money for the Komen Foundation. People there are dedicated to finding better screenings, treatments and cures for breast cancer.

Now about the story, because that’s the real fun part isn’t it? Sheila’s a survivor. She’s had her right breast removed and as the story opens, she’s miserable. She’s well enough to realize all the ways her life has changed. She’s terrified that her husband won’t find her attractive any longer. I can’t imagine what that would be like, but I tried. I wanted Sheila to tell me and the reader what getting a diagnosis was like. How would I feel, standing in her shoes? What might I be scared of, even beyond the obvious fears? Most importantly to this story, what would happen to my sexuality? To anyone’s?

I wanted to write about a couple who were committed to each other and to the successful ass-kicking of cancer. I wanted to talk about sexuality and illness, a little. Mostly I wanted to write a story that was sexy, romantic and fun because cancer doesn’t mean you have to give up your entire life’s happiness. Joy can be found in the strangest of places. In Sheila’s case, it’s found at the end of a flogger and with a collar around her neck.

Please support the Coming Together series. When you buy, you are not only getting a book full of hot stories, but the good feeling that comes from supporting an important cause. Two for one! There’s no downside.

To stretch my own support as far as I can, I’d like to offer a prize to a commenter on this post. Just leave a comment here and I’ll draw a name at random to receive their choice of my titles for free (anything but this story!) You can find a list of titles and all things me at http://www.ameliajune.net. Don't forget to include your email address in your comment!

Thank you for supporting the Coming Together crowd!

In Coming Together: For the Cure 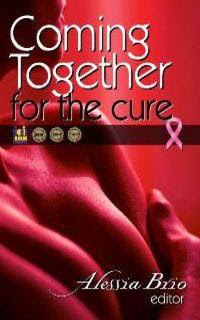 Forcing her breath to slow, she tried to focus on Liam instead of her sore and tired body. She inhaled the jasmine and vanilla now wafting to her. The herbs served to soothe her overtaxed nerves, encasing her in a warm glow. After fifteen minutes or so had passed, she felt water flowing over her belly and thighs. Opening her eyes, she saw Liam wringing the life out of a washcloth with his huge hands. The contrast of warmth and the cool air made gooseflesh appear on her legs and arms; made her nipple—not nipples, nipple—pucker and harden. A month ago the sensation would have thrilled her. Now, the reminder of her missing flesh twisted her arousal into an ugly, sick weight in her stomach.

Liam, though, was as excited as ever.

"Oh, look at that. I've gone and made you all shivery. Here, let me warm you up."

He leaned over the bath and put his mouth on her left—only—nipple, taking it between his teeth. The liquid heat of his mouth did nothing to soften her, in fact the flesh grew harder as he first sucked, then bit down just hard enough to make her squeal in equal parts enjoyment and disgust. How can I be turned on like this? Even now?

"Yes, the new husband will have to remember how much you love to hurt—love it and hate it in that mysterious, masochistic way you have." Liam still spoke into the air, not directly to her. In a way, the lack of eye contact helped her listen without feeling self-conscious. "He'll need to learn how to walk the line between too much…" He clamped his teeth on her nipple, without breaking skin, but hard; so hard she grabbed his hair and pulled him off her. "And just enough," he finished, a grin of pure sadistic pleasure on his rugged face.

"Liam Keeting, you are incorrigible," she scolded, though the tingling that spread through her when he grinned like that was hard to ignore.

"Maybe you've changed," he went on, oblivious to her protests and sighing an exaggerated sigh. "Maybe your right breast was the source of all your kinky fantasies, all your dark desires. Perhaps you no longer need the firm hand I've always known you to crave." Facial expression passive, he ran his hand deep into her hair and pulled her head back, exposing her neck. He dug his teeth into the creamy flesh there, a rumble issuing from his chest like distant thunder. In her mind's eye, she could see the welt, red and raised, identical to countless others he'd given her since the night they were wed.

He ravaged her neck, alternating between sucking the skin into his mouth and biting down, a bruise surely forming for the world to see.

"You'll leave a mark," she managed to gasp, knowing it was already too late. Liking that it was too late.

"We've already decided you're flawed," his expression was unreadable, "so what does one more mark matter? Tell Dr. Painfairy you hit your neck on a door or whatever."

"Painfairy?" She raised her eyebrows at him, but he merely shrugged and stood up. Her chest tightened in panic—was he leaving her? Stop being so flighty, she scolded herself. He's obviously not going anywhere. Sheesh. She couldn't help feeling anxious and insecure, a tense feeling that settled in her shoulders, eking away the relaxation she had been enjoying. Forcing herself to take deep, cleansing breaths, she watched him through lowered lashes, hoping he didn't notice her worrying.

First, he shucked his T-shirt, exposing his Adonis-like upper body. Broad shoulders gave way to a solid wall of muscle, lightly furred but not too hairy. Staring at him, she realized her muscles had begun to clench and unclench, specifically her inner thighs. He's so gorgeous, she mused for the millionth time.

His eyes met hers and traced their path, one corner of his mouth quirked in his sadistic grin once more. He knew perfectly well there was more than one way to torture her, and she found herself swept away in glorious anticipation. What will he do? Spankings, maybe? She loved a good spanking, and hated it too, all in one strange but lovely breath.

"Well, I've cleaned you up. Now I have to fix that chipped paint, don't I?" He padded over to the sink and pulled out her pink nail polish and the little foam dividers she used when she gave herself pedicures. Another giggle escaped her lips as her hunky husband sat at the foot of the tub and daintily placed the dividers between her toes. His hands were big but not clumsy, and he was soon brushing a fresh coat of paint on each nail, carefully so as not to paint the skin around. His eyes nearly crossed in concentration, and she marveled at his dedication to such a silly little job. But he always attended to her this way, as though she was the only person in the world. He blew across her feet, taking care not to smudge his handiwork until it dried.

Another shiver worked its way through her as the cold air hit her sensitive toes. Liam's eternal patience often drove her to distraction—leaving her wet and desperate for orgasm or piping hot during an argument gone awry. He always, always took his time.

"There," he exclaimed, proudly beaming at her fresh paint. "You look good as new. I mean, all used wives have a little rust on the underbelly, right?" He leaned into the tub and kissed the swell of her belly. "That water is probably cold by now. Here, we'll get you out of that tub." He held a hand to her and she took it. When she stood, the bath water sloshed and splashed on the floor.

"Wait, don't go anywhere," he said, then hurried to mop up the excess water. "Don't want you to trip and get any more dents, do we?" Again, he held his hand out to her and again, she took it, relying on his solid support as she stepped out of the tub. She dug her toes into the fuzzy pink floor mat as he wrapped a huge towel around her, carefully avoiding her stitches and rubbing her firmly. Standing to face her, he reviewed his handiwork. "Yep, you look good. You'll have no trouble finding another buyer."

"All right, Liam, I get it." She stamped a foot in a fit of temper, red curls bouncing off her shoulders.

Email ThisBlogThis!Share to TwitterShare to FacebookShare to Pinterest
Labels: Amelia June, Coming Together: For the Cure, My Right Breast, Spanking

I have always loved this story! Thank you so much.

What a great idea. I have lost too many to different forms of cancer. I've known too many women who have the lost the fight against breast cancer...I've also known one man who had breast cancer. His was caught in time, and he underwent a radical double mastectomy.

Wonderful. We should all support this cause.
debby236 at gmail dot com

Oh, that excerpt was such a tease! I want to read more. They sound so good together.

I'm so sorry that you've had so much happen to your family but proud of the strength you maintained through it all. The story sounds great and I love the excerpt.

Sometimes it is the dark times that remind you of the light, you know?

Thank YOU for letting me be a part of the book!!

Congrats to joder, she won a copy of one of my other titles!! Thanks everyone for your kind words :)

Nice dialogue -- thank you! I love the line about how the right breast must have been the source of all her kinky desires...