Do The Write Thing

Allison, I said to myself, take the advice of Virginia Chance and stop procrasturbating, would you please?

When I volunteered to participate in Share the Love, I was delighted to be among the authors coming together for Coming Together.

And then I sat down to write—about my ideas, my inspirations, my motivations—and I couldn’t think of a single “profound” thing to say.

I mean, I can’t say that writing for Coming Together makes me feel like an audaciously awesome altruist. It’s true, sure, but sort of narcissistic, don’t you think? Like, I’m so vain, I probably think this post is about me. (Don’t I, don’t I?)

Dismayed, I delayed, until I had no choice but to get back on the write track.

Okay, so why do I write for Coming Together?

I think erotica is something of a guilty pleasure, not just for the readers but for the writers as well. We’re a perpetually prudish society that thinks Salt-n-Pepa are out of season—in other words, let’s not talk about sex. But it’s hard to feel guilty when you’re giving. When I give a poem or a short story to a Coming Together anthology, I’m donating differently, and I think the same goes for those who consume our collections.

I’ve been a phil-anthro-pist since 2008, contributing to five CT anthologies. Proceeds from the sale of these anthologies are donated to Amnesty International (At Last), Conservation International (Al Fresco), V-Day (Into the Light), ONE (As One), and the Coalition for Positive Sexuality (By Hand), all veritable charitable organizations.

Basically, I get a big bang out of beneficence. I also get the privilege of sharing the spotlight with the cliterary elite—each collection is a potpourri of creativity, showcasing the diversity of perversity. 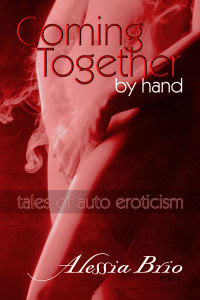 Now I’d like to share a snippet of “Quite Contrary,” my short story from the masturbatory medley that is Coming Together: By Hand…

She never understood how truncated wax could generate a romantic ambiance. And she is quite certain that her beige voile curtains, a wedding present from her mother-in-law, are not flame retardant.

She cannot possibly expect to concentrate with the husky voice of a husky male crooning about desire and devotion. She will feel as though someone is in the bedroom with her, supervising, scrutinizing, salivating.

She crosses to the table displaying her china doll collection. Carefully, she rotates the stands, ensuring that the dolls’ line of vision is obstructed by the paisley print pattern adorning the walls.

To further safeguard against voyeurs, she jiggles the doorknob to make sure it’s locked. Though she has the house to herself, another resident could return at a moment’s notice and neglect to announce his arrival.

Her eyes survey the room, pausing to inspect Chester, the hibiscus plant suspended near the window. Mentally reviewing her morning agenda, she recalls that at 9:05, shortly after breakfast, she tended to her companion. This comforts her, for she cannot have a dehydrated plant hanging over her head.

Satisfied that everything is in order, she approaches the bed, folds down the coverlet, and lowers herself onto the sheets, crisply ironed and boasting hospital corners.

She glances at the alarm clock. 10:10. She has several hours before she must begin getting ready for her surprise party, where she will be forced to smile and feign appreciation for a blouse she will want to exchange and a gift certificate for a beauty treatment she did not even know she needed.

In the interim, she will have a private party.

She has spent months pondering the commemoration of the five decades she has coexisted, however discordantly, with the rest of the human race.

And there is only one gift that will suffice.

She has a surfeit of degrees, framed and fastened to the walls of her office. She has an abundance of accolades, conferred upon her by colleagues who both envy and extol her novel analyses of English literature. She has a doting daughter, who is attending a nearby university and following in her mother’s footsteps. She has a husband, too, but their relationship, while amicable, has been tempered by routine and familiarity, and he is more often her buddy than her lover. And, of course, she has Chester.

But what she doesn’t have, what she’s never had, is an orgasm.

I’d like to invite you to our protagonist’s private party:

But before you go, please take a moment to enter my giveaway. All you have to do is comment on this entry by March 1, after which I will select at random one winner to receive the e-book The Bad Girl’s Sweet Kiss, which contains my f/f story “Getting Her Rox Off.”

Email ThisBlogThis!Share to TwitterShare to FacebookShare to Pinterest
Labels: Allison Wonderland, Coming Together: By Hand, Quite, The Bad Girl's Sweet Kiss

Thanks so much for your funny but very true post. I'm so glad to have you participating in the Bash.

I think my favorite part of the excerpt is the checklist!

Thanks for the excerpt!
forum_forums@yahoo.com

I have always loved your writing (wish you would submit to me more often) and this was no exception. Enjoying reading along, fairly certain where it would end, the last line still produced a deep sigh.

I LOVE the new word you coined....procrasturbating. Better than any word I've seen on my word-a-day calendar. Thanks for being here today and sharing your thoughts with us.

Thanks for the excerpt. I loved her OCD-like personality. She's a bit uptight, you think? Would love to see how she lets her hair down as she finds her sweet spot.

Thanks for blogging today.

Ah, what a great final line—I will admit, unlike D.L, I did not see it coming (ha). :) A lovely excerpt; thanks for sharing!

I love this story--it's one of my favorites from Coming Together By Hand, and a great example of what erotica can be. Not only is it a hot story, it also has a lot to say about true independence of spirit. I love the way this character sets aside her fears and inhibitions, sexily and in private.

I want to thank everyone for their delightful and insightful comments. So... thank you, everyone! :) I treasure your feedback and appreciate the time you took to read and share your thoughts.