Earthquakes. Landslides. Wildfires. Those are the natural disasters I grew up experiencing in the beach town I called home. People call my home town paradise, want to live there when they visit on holiday and then wonder how anyone can live there when a disaster strikes. Well, all I can say is that’s pretty much how life goes Southern California and I have nothing but the utmost respect for the fire department personnel and all they do to help people survive.

In October 2007, the Santa Ana winds whipped around and multiple wildfires raced from Santa Barbara County to the US/Mexico border. The two largest blazes were in San Diego County. This was a very scary time for me because I was thousands of miles away and powerless to help my aunt and uncle. Thankfully they had help being evacuated which eased my mind. Later, once the fire had been put out, I went to visit them. It was scary to see how close the fire came to burning their house down. Before October had finished, editors Alessia Brio and Will Belegon put out a call for stories to go into their Coming Together collaboration where the proceeds would go to support those involved in the wildfires. 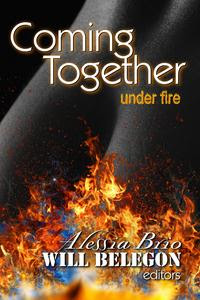 I quickly raised my hand and said yes!

I suppose I should tell you why, besides the impact the fires had on my relatives, my heart was with the Under Fire anthology. I come from a long, long standing tie to that particular group of everyday heroes - men and women firefighters. My great-uncle, grandfather and uncle were all officers, and the latest generation has joined up as well. All that they did and do makes me a very proud to call them family.

Mixing the beach with a firefighter was an obvious scenario for me when it came to writing a short for the anthology. The drive-in, exhibitionism and a brief ménage a trois moment were thrown in because, well, I tend to write on the naughty side.

In Coming Together: Under Fire

Do firefighters get kinky with as much passion, dedication, and single-minded focus, as they do when running toward a fire?

Life as a firefighter is hard work, long hours, dangerous, and Mark Taylor accepts it all. Thankfully, he has a lover who brings balance and makes everyday a great day. Hana, a busty beauty, is smart, beautiful, and sexually adventurous, his perfect match.

There is, however, one thing keeping him on edge, and it's time to fix it. Tonight, while they're at the Drive-In, he'll play with her mind and body until she tells him what he needs to hear: that she loves him—heart, body and soul.

"Hey, baby girl." He bent over and laid his lips against hers, taking possession of her senses. "Are you all right?"

"You aren't too cold?" His concern warmed her, as did the blanket he pulled up, covering her shoulders.

"How could I be? You're a like a radiator on high, spilling heat for all around you."

To her, his deep quiet voice was as seductive and enticing as what his body could do to hers. She felt his every breath sliding through her veins, spreading desire along the way until it ended in a pool of lust bubbling for attention, satisfaction. The blunt demand his words presented turned her on even more. He had that kind of effect on her.

Mark Taylor, extraordinary lover and firefighter, had been away on a three-day shift and was now on-call if something big came up. The every able body in a ready position was mandatory at the coast during unpredictable Santa Ana wind conditions. There was fear when she thought specifically about what he did, the danger promised at every turn, but made a conscious effort to think about the positive. Hana enjoyed their time together and waited for the day he said he loved her. She believed he did but wanted to hear the words all the same.

The next four days, he was hers and she was feeling selfish, hungry for his particular brand of loving. Having met on a blind date four months ago, they quickly discovered how well matched they were, in and out of bed. They were sensualists, who enjoyed their bodies and sex, luxuriating in all the pleasure that came when they came together.

The evening's festivities were taking place in a different forum than where they usually played. The venue was a roving drive-in, set up at a private cove overlooking the Pacific Ocean with triple-X films on the screen for an invitation-only crowd.

The frisky nerves dancing in her belly had little to do with the movie and everything to do with the man holding her on his lap. Without a thought spared for saying no, she gave him a wicked grin and slipped beneath the blanket.

Deciding everything was going her way, she chose to go all out and pull the words she wanted to hear from him, or at least start him down the track to spilling them.

It was a clear fall evening, not a cloud in the sky. For that time of year, a cooling sea breeze would be expected, but Mother Nature had her own schedule. Instead, there was a warm wind sweeping in from the desert, which would allow the people playing sex games to stay out all night. None of it mattered to her, she'd take him wherever and whenever he asked or she wanted.

He was her heart after all.

Her sigh of contentment escaped when he spread his legs, making room for her between them. With her knees resting on the cushion he'd brought for them, she used one hand to brace herself and started unbuttoning his shirt with the other.

"I've missed you lover," she whispered as she moved over his body. 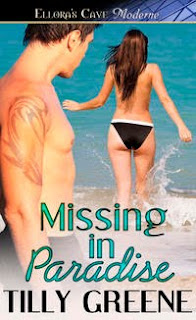 Having sex on the beach is often thought of as romantic, but it’s not, far from it which is why Mark and Hana from Drive-In are in the back of a pick-up truck. No, the bed of a truck is not all that much more comfortable, but definitely better than bringing sand into the mix. Where’s the least romantic place you can think of to enjoy a passionate interlude with a partner or partners? A recent release of mine, Missing in Paradise, also takes place at the beach, Malibu in specific and I’m giving a copy away to a random person who comments.

About the Author: While traveling around the world with her husband, Tilly Greene researches and writes erotica and erotic romance novels in a variety of genres and sub-genres. Every day she looks forward to writing about women who are independent and confident, the men who love them, and their twisting passionate path to each other. She is published in both novel and short story lengths, all coming out first as eBooks and some in print. The author is a member of RWA, often volunteers to judge contests for unpublished writers, and also a participant in collections that benefit both local and national charitable organizations.

Email ThisBlogThis!Share to TwitterShare to FacebookShare to Pinterest
Labels: Coming Together: Under Fire, Missing in Paradise, Tilly Greene

Hey, thank you for including me - love being a part of Coming Together :-)

Don't forget the sunscreen, Alexx, they're seriously sizzling at the beach :-)

Another great sounding story for a great cause. Thanks for the excerpt that has me putting this on my wish list!

Thank you, Joder. The beach is a lovely place for a bit of lust, minus the sand of course :-)

Thanks for the wonderful excerpts....

Thank you, Michelle, and guess what - your name was the one that floated to the top using Random.org! Congrats! If you email me [tilly@tillygreene.com] the addy you use to shop at ARe, I'll get a copy of Missing in Paradise sent to you :-)

Happy hump day everyone and don't forget you're still in the running for the big prizes being drawn at the end of the month - meanwhile, enjoy Sharing the Love!

Loved the excerpt, looking forward to adding this to my TBR pile.

Thank you, Suzanne, it's a great collection of hot stories/poems for a serious yet hot issue :-)

Funny point about how bad beach sand can be. The question about least romantic place has me a bit stumped, though. The kinky side of me can turn everything hot given the right circumstances. Church? No, actually, that sounds pretty hot. Family's house? Then I imagine having to be quiet, and that sounds hot, too... Thanks for the post and excerpt!