Coming Back to the Beginning

The out-of-doors is where I am happiest. The more time I spend outside, the less stressed I feel. So it's no surprise that the first piece of erotica I ever wrote has an outdoor setting. The story that became Wet As Spring, in the anthology Coming Together: Al Fresco, was written as a journal entry more than twenty years ago. Then it was just a fantasy I'd had after finding, while on a walk, a spot just like described in the story. I never showed it to anyone then, not even my husband. It would be ten years before I typed it up on a computer and edited it. I showed it to my husband then, and he thought it was quite good. But it would be a few more years before I'd even think of submitting it for publication.

When I saw the call for Al Fresco, I knew that's where I wanted to send it. Not only because the setting of the story fit, but because I felt good about sending my first submission out to a series like the Coming Together one, where the proceeds are donated to charity. Over the years I've donated my time to various organizations, and I saw my submission as a continuation of that. So I was thrilled beyond belief when my story was accepted by Alessia. When I heard about this blog bash, I knew I had to take part, mainly to say thank you. I loved reading about the history of the series in Alessia's own post that started this month-long event off.

I've come a long way from the hide-it-in-a-journal days, in regards to my erotica. When I first considered publishing it, I'd had a pseudonym all picked out. I've not used that one. She'll probably become a character at some point. By the time I actually sent Wet As Spring out, I'd decided to use part of my real name to publish by. The reasons include and involve my long-standing fight with shame. Hence, Robin Elizabeth was listed as author of that story. By the time, over a year later, I published something again, I decided to use the name Erobintica, the name I use for my blog, to honor the late friend that gave me that nickname. And I put my real name in my bio. I'm lucky to be able to do that. This lead to some confusion when I was first corresponding with Lisabet about my turn here on the Coming Together blog bash. In a way, all these names are my visible growth rings. 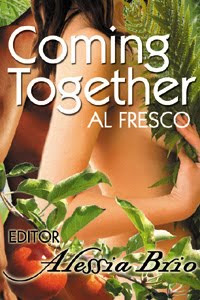 Whenever I think of this story, Wet As Spring, I'm transported back to that very real location. It is one I'll probably never see again, not only because I live on the other side of the country now, but also because I happen to know that a housing development did go in eventually. So I'm especially glad that Conservation International is the recipient of the funds from the Coming Together anthology my story is in.

I'm sorry I don't have any give-aways. I've not been all that prolific the past few years. But if you like this little bit of story, you can buy Coming Together: Al Fresco, and read the rest of it along with the other wonderful stories. Make sure you leave a comment here, and on all the posts this month for a chance at a $50 gift certificate from All Romance Ebooks and a Kindle Fire! For details, see Alessia's post on February 1.

Excerpt from Wet As Spring, from Coming Together: Al Fresco:

No bulldozers had been this far down for awhile. Plants were springing up where the tracks had crushed before. Bracken ferns stood unfurling their fronds. Wild blackberry vines, indestructible, returned to creep and invade the pathway. A spring poured from the bank above and carved a miniature canyon down the center of the dirt road. Foxgloves and sword ferns lined the sides. Annie passed beneath an old maple, sheathed in moss. Soon she passed the last marked parcel. For Sale.

Here the ground was damp, the water table just below the surface. Her shoes sucked mud as she stepped into the clearing at the end. Sun-warmed insects filled the air. Long grass hid the soggy ground. She turned and followed what used to be a path to the stream, now overgrown. Brambles, grasses, and wildflowers determined to take back the ground that only last summer had been torn and stripped by a bulldozer in search of marketable real estate. It was about impossible to actually get to the stream without risking thorns and snags. She opted to follow the bank a ways. She stepped gently, pushing aside a fern that was as tall as her waist. She came to a shaded bower formed by the entangled branches of a myrtle and an old tanoak.

In the shelter beneath the branches, clover clustered in the dapples of sun. She imagined deer bedding down here. She could hear the gushing of the stream, swollen with last week’s rain. She reached up and plucked a leaf from the myrtle and crushed it between her fingers to release the sharp, pungent scent. She wished her husband was with her. At the thought, a flush spread over her whole body. I’ll bring him here she thought.

They would walk down the road together, the sun warm and the breeze gentle. She would be wearing a loose dress, her bare legs stroked by the plants as she stepped through them. It would be as sunny and green a day as this…

He had been walking alongside her, now he let her lead. She ducked under the low branches of the myrtle and stood up in the bower. “Isn’t this wonderful?” In answer, he dropped his rucksack and slid his hands around her waist. Immediate tingles danced up and down her spine. She put her pack down and reached for his beard, gently tugging in her direction until their lips met.

They kissed slowly, then broke apart and spread a quilt out on the ground. She lay down and looked up through the leaves, took a deep breath and closed her eyes. Feeling his hand on her stomach, she opened them and looked up at him. His hand ran to her throat, caressing her chin as he bent and kissed her, warm and deep. She sighed as his hand moved to her breast, her nipple hardening under the fabric. Lost in sensation, she smiled.

She felt his hand moving slowly down across her stomach, down her thigh to the hem of her dress, then moving beneath the cloth, back up her leg. Her breath came faster and her muscles tightened in anticipation. But his hand steered wide and came up onto her belly. She quivered. He knew what this did to her, this teasing.

He unbuttoned the front of her dress. The cotton fabric fell open, and she could feel the sun, filtered by the leaves, on her bare skin. She stretched like a cat, and a sigh escaped once again. Then she felt his lips on her neck and his fingertips on her nipple. Soon his lips replaced his hand which traveled to her thigh. She moaned. His hand stroked her leg down to her calf, then back up, briefly stopping to draw circles in the soft flesh behind her knee and making her giggle. She shivered as his hand moved up the inside of her thigh, ever so lightly brushing his fingers against the triangle of cotton fabric covering her, now damp.

They both rose to their knees on the blanket. She unbuttoned his shirt slowly, her dress open, keeping his gaze. As the cloth slid off his shoulders, she kissed the side of his neck. Her fingers trickled down his chest, through the sparse hair to the buttons of his jeans. With a kiss for each button undone, she freed him. He stood and let her pull down his jeans and underwear as one. His cock was rigid and jumping as she circled it with her finger, spiraling to the tip. He reached and pushed her dress from her shoulders, slid his hands into her panties. So wet.

Thanks, Robin! I'm happy you're a part of Coming Together.

Welcome to Beyond Romance! I agree, there's a special thrill to love in the great outdoors.

Thanks, Alessia. Happy to be part of it!

Lisabet, thanks for having me here!

I loved learning about your path to publishing. The topics you write about are ones I enjoy and I look forward to learning more about your works. Great excerpt that warmed me up on this super cold day.

Thanks for the excerpt and brief insight in to your writing career...hope your muse is inspired during the coming year.

Thanks for sharing your story behind the story.

I know a secret outdoor spot that seems very much like yours, except that the blackberries have taken over so much space that lying on the ground isn't all that tempting. I loved the wy it worked out in your story.

So absolutely lovely and delicious. You know how I feel about the outdoors! We must be soul sisters. Wonderful, Robin -- thank you!