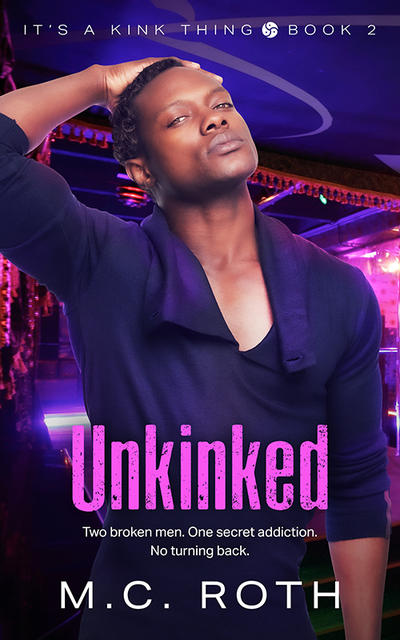 Two broken men. One secret addiction. No turning back.

When Derreck stumbles upon Maddy, who is sitting in his car and nearly sweating to death under the summer’s sun, he is at his breaking point.

But Maddy is just as lost, searching for a Dom he only knows by name and waiting in his car outside the club Unkinked on the tiny chance that the Dom might find him. When it is revealed that Derreck is the man Maddy has been searching for from the very beginning, it seems fate couldn’t get any sweeter.

Derreck invites Maddy into Unkinked as his guest, with the promise of the pain that Maddy so desperately craves. A scene that should have been simple opens Maddy’s mind to a new world and community that aren’t riddled with guilt or judgment.

Derreck knows he can’t let his sub slip away, but Maddy is keeping secrets from his new Dom—secrets that could change their relationship forever

Reader advisory: This book features pain play, edge play and knife play. One character has a history of addiction and self-harm.

Book 2 in the It's a Kink Thing series - https://www.firstforromance.com/series/its-a-kink-thing 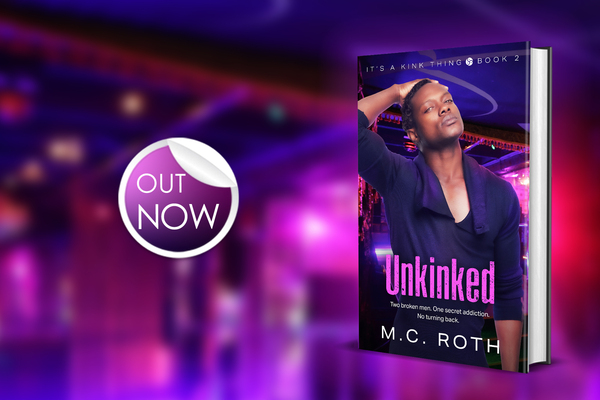 Stepping outside, the sun instantly soaked into his skin, blanketing him in warmth and urging sweat from his body in seconds. The sun had barely moved in the sky, blazing down with what must have been record-breaking heat.

He could barely feel his feet as he stumbled his way along the sidewalk to his car, stopping at the lamp post and leaning on it as he took a deep breath. The post seared through his shirt, heat bursting over his flesh until he thought he might erupt into flames. It did nothing to quell his exhaustion.

He’d never let it get quite that bad before, but he’d never stayed away so long, either. He hadn’t wanted to face Trick or Nav or anyone else. He just wanted relief. The apology had given him a touch of respite but not enough to calm the restless energy in his core.

Derreck looked up and his gaze followed the sound of the voice.

The guy was still sitting in his car, as if it hadn’t been almost an hour. He had pushed up one sleeve of his sweater, one thin and delicate wrist exposed, but the rest of his upper body was still covered with thick, black material. The flush on his cheeks and the sweat in his hair told of how hot he must’ve been, but he was making no move to remove his sweater.

“Still waiting?” asked Derreck, looking back at the club entrance. None of the couples had been missing a third that he knew of. And no Dom would leave their sub in a hot car like he was some sort of oven-baked dog.

No responsible Dom, at least.

The man nodded, flicking his gaze to the door and back to Derreck quickly. His eyes had gone shiny, as if he was just managing to hold back tears. How long had he been there before Derreck had come to the club? How long would he wait?

It pulled at what few heartstrings Derreck had, but it also spoke to his Dominant side.

It pissed him the fuck off is what it did. He clenched his hands into fists, crossing his arms and staring down at the man in his car.

“Who are they? I’ll go get them for you,” said Derreck. There was no way he was walking away with this guy still sitting in his car as he got closer and closer to heatstroke.

“Oh.” The man dropped his gaze, the pureness of his submission pulling Derreck deeper into the strange thrall. His cheeks flushed brighter, sweat beading under his eyes.

Perhaps it had been the wrong question. Some Doms insisted on titles, and Derreck would have no luck if the guy simply said ‘Sir’ or ‘Master’.

“Describe what they look like,” said Derreck, taking a deep breath to keep the anger out of his voice. He was definitely kicking someone’s ass tonight—just not in the way he’d hoped.

“I—I don’t know,” said the man, his gaze still fixed on his lap. “I only have his name. Someone—a friend online—gave me his name and said that he might be able to help me. They said he comes to this club, but I can’t get in without an invite.”

“You can if you’re a guest,” said Derreck, letting out a sigh. This was just getting stranger and stranger. “Your friend can invite you as a guest, and you’ll have a temporary pass.”

“Oh, they aren’t a member,” he said, finally looking up, but only for a moment. “They went to an open house event here years ago, but they don’t live in the city. I don’t know anyone with a membership.”

It was a conundrum that had always bothered Derreck. Privacy came with the price of inaccessibility and exclusivity, especially for subs who were heartbreakingly shy. He would still take his privacy, though. The one-and-done kinksters could fuck off.

He ran a hand over his scalp, scratching the short, tight curls. It was too fucking hot to think, and he had to get off the street before he passed out.

“What’s the name, then? I can tell you if they are here,” said Derreck. He wouldn’t give away much, because if this guy was a stalker, which was quickly becoming a possibility, then he didn’t want to encourage him.

“Oh, it’s… Let me grab my phone. I have it in there.” He fumbled with his pockets, finally sliding his phone out from the pouch in his sweater. Why the hell was he wearing so many layers? Derreck was getting warmer just looking at him. “I saved it in here, ’cause I’m terrible with names. The guy’s name is Derreck.”

Derreck almost choked on his spit when he heard his own name. Cocking his head to the side, he dragged his gaze up and down the guy’s form one more time. His first impression had been pure madness, but he never was one to hold on to a first impression for long. He usually waited until the sixth before he really made up his mind.

The guy was in shorts and flip-flops, which Derreck hadn’t noticed before. It couldn’t have been great for driving, but at least he wasn’t insane enough to wear long pants along with his sweater. His clothes were good quality but well worn, so he probably wasn’t out to try to kidnap Derreck. He didn’t stand a chance either way, unless he had a gun in his pocket.

The man fiddled with his thumbs as Derreck watched him, the chewed edge of his nail vibrant with fresh blood. All his nails were like that—bitten past the quick to the delicate pink flesh beneath.

“How did your friend say he could help you?” asked Derreck, eyeing the guy’s cell phone. It was a new model, fresh out of the store with a custom case.

“I…” The man trailed off, bringing his thumb to his mouth and catching the vermillion edge with his teeth. A fresh droplet of blood oozed up, shining against his lip until he slowly dragged it away with his tongue.

“I heard he could hurt me,” said the man, so quietly that Derreck had to strain to hear him. “I need someone to hurt me.”

Pushing away from the post, Derreck circled around the car and pulled the door open with a jerk. The man’s eyes went wide and he drew back, shrinking into his seat as Derreck loomed over the car.

“What’s your name?” asked Derreck, lowering himself into a squat. It left the man with a slight height advantage, hopefully easing some of his fear that had sprung up. Derreck reached for the man’s hand, pulling his thumb from his mouth. The flesh was burning beneath his palms, slick with sweat and clammy.

“Maddy,” he said, letting out a sigh at the touch.

There was no buzzing under Derreck’s skin or desire to wipe his fingers clean. It was the rare perfection that always seemed to elude Derreck when he needed it most.

“And why do you want me to hurt you, Maddy?” asked Derreck, watching as Maddy’s eyes went wide with realization.

M.C. Roth lives in Canada and loves every season, even the dreaded Canadian winter. She graduated with honours from the Associate Diploma Program in Veterinary Technology at the University of Guelph before choosing a different career path.

Between caring for her young son, spending time with her husband, and feeding treats to her menagerie of animals, she still spends every spare second devoted to her passion for writing.

She loves growing peppers that are hot enough to make grown men cry, but she doesn’t like spicy food herself. Her favourite thing, other than writing of course, is to find a quiet place in the wilderness and listen to the birds while dreaming about the gorgeous men in her head.

Find out more about M.C. Roth at her website - https://www.mcrothbooks.com/

Enter for the chance to win a $50.00 First for Romance Gift Card! Competition hosted by Totally Entwined Group

Welcome to Beyond Romance, M.C.! I love your cover.