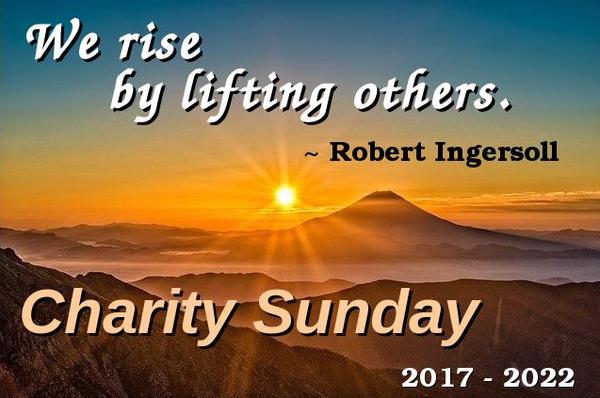 Last Wednesday – the day I posted the sign-up for Charity Sunday – was the International Day of Peace.

Given all the conflicts in process around the globe – in Ukraine, in Syria, in Ethiopia, in Myanmar, in the Middle East, on the U.S./Mexican border – it may seem naïve and silly to hold such an observance. It’s difficult not to feel discouraged, or overwhelmed by the suffering, violence, and injustice that seems to be everywhere. What can one person do? How can I personally stop the murder, the rape, the deliberate destruction of people’s homes and livelihood?

I believe that making peace is as much an active process as making war. It begins in our own lives and communities: when we advocate for fairness and social justice, when we act with compassion, when we treat others as worthy and deserving of respect – no matter who they might be.

War serves the ends of a few, but brings suffering to the many. It thrives on fear, the deliberately created false narrative of the threatening, evil Other. With our daily choices, we can deconstruct this illusion, one individual at a time. The huge majority of people in the world, including the people we’ve been taught to believe are enemies, want the same things as we do: safety, shelter, family, freedom, respect, and a sense of belonging. Our languages, cultures and values may vary, but we have a great deal in common as members of humanity.

Peace building starts from this realization and works to share this vision with others.

For today’s Charity Sunday, I am supporting the American Friends Service Committee, a faith-based organization working for peace and social justice, in communities and in the halls of power. AFSC understands that war can’t be abolished with the stroke of a pen, and that peace can be planted and nourished, one person at a time. I encourage you to visit the AFSC website to learn about their actions and themes. 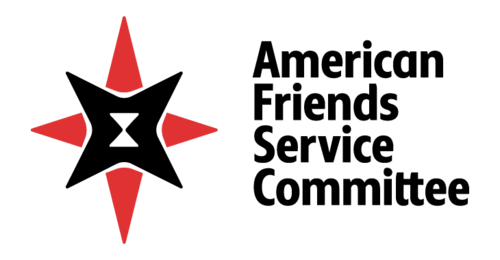 I’ll donate two dollars to AFSC for every comment I receive between today and the 30th of September.

Meanwhile, to entertain you, I have an excerpt from Refuge, one of the few stories I’ve written that has a character who’s a soldier. If you’d like a free copy of this tale, just say so in your comment. Include your email and let me know if you prefer mobi, epub or pdf format. This is not a giveaway; anyone who wants a copy can have one for the asking. 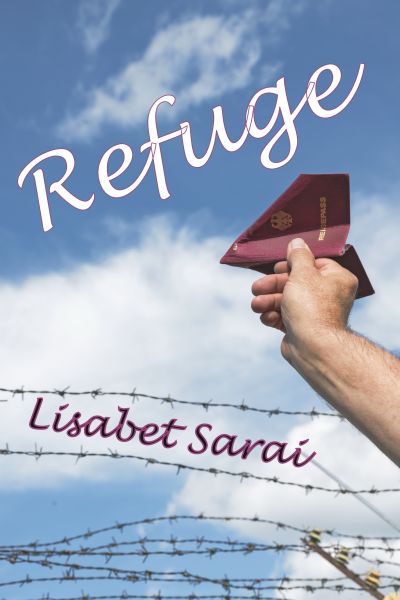 “Excuse me, do you have a pencil?”

I jumped. I had been daydreaming about home, eating somtum and gai yang with Mum and my brother Daeng under the tamarind tree in the backyard. The light tap on my shoulder dragged me back to the smelly, dusty camp where I was supposed to be on guard.

“A pencil? Or a pen?” The young woman gestured back towards a knot of kids gathered in the shade of the water tower. She held up a sheet of corrugated cardboard scavenged from some trash heap. “I’m teaching them their alphabet. I’ve got this, but nothing to write with.”

She wore a faded tee shirt, baggy shorts and flip flops. Her hair hung down her back in a messy ponytail tied with an old shoelace. Still I could see that she was pretty, slightly built, with sharper features and paler skin then the girls back home. Her smile appeared genuine, though her eyes appraised me nervously. I guessed that it took some courage for her to approach me, a uniformed soldier with a loaded rifle—never mind that I was only a year or two older than she was, and wanting nothing more than to go back to my family in Yasathon.

I leaned my gun against my thigh. “I’ve got a pencil back at the barracks, but I can’t leave my post until my shift is over. Maybe you could postpone your lessons until after three? I’ll bring it to you then.”

Her face lit up. She grabbed and squeezed my hands. Hers were tiny, but strong. “Oh, thank you, sir! Thank you.”

I blushed at her enthusiasm. “Never mind. Now you’d better go.” I’d noticed Sergeant Chokchai headed my way. He didn’t approve of what he called “fraternization” between us and the camp’s inhabitants.

“Everything secure, Private Nu?” He loomed over me. I swallowed hard. He came from Bangkok. He had made it clear in his view, I was just a stupid hick from the Northeast.

“Yes, sir. Everything is normal, sir.”

“What were you doing, talking to that filthy Burmese cunt?”

I winced at his foulness. “Nothing. She wanted to know the time, that’s all.”

“Why should she care? She’s not going anywhere!” Chokchai gave a nasty chuckle “You should know better, though. Don’t talk to them. Don’t get involved in their affairs. Oh, they’ll act all polite and respectful, but they’re snakes. They’ll stab you as soon as your back’s turned. You remember what happened to Sakon, don’t you?”

“Yes, sir.” Sakon had been another sergeant. They had found him behind the mess hall with his throat slit. Everyone assumed that he’d been murdered by one of the refugees, even though he’d been a brutal man who had many enemies.

“Just remember, they’re animals. Ignorant, superstitious animals.” He looked over his shoulder in the direction that the girl had disappeared, shaking his head in obvious disgust, before returning his unwelcome attention to me.

“Private Bom has the runs. I want you to take his guard shift after you finish yours.”

“That’s an order, Private. Or are you tired of being a soldier?”

“No, sir.” There were no jobs in our village these days. My mother depended on the thousand baht that I sent her each month, though she cried whenever I phoned her.

“If army life is too tough, we can always send you back the rice fields.”

“I can handle it, sir. But can I have fifteen minutes between shifts to go to the toilet and get something to drink?”

Chokchai’s grin made my skin crawl. I could tell that he wanted to say no. Then he decided that the extra four hours standing on guard was torture enough—for the moment. He nodded. “Why don’t you go now? I’ll take the watch until you get back. But you’d better be on time.”

“Yes, sir.” I handed him my rifle. He slung it over his shoulder, then strolled over to lounge against a tree, out of the sun but still within view of the gate.

After a quick stop at the latrine, I hurried back to the thatched bamboo hut that served as our quarters. The single room dwelling was empty. Afternoon sunlight filtered in through the chinks in the walls. A fly buzzed in lazy circles near the ceiling.

I unlocked the chest at the foot of my cot and rummaged around until I found a brand new pencil. On impulse, I grabbed a cheap school notebook, too. I had planned to try keeping a journal. Between the work load and my homesickness, I hadn’t gotten around to writing a word in the three months that I’d been stationed here.

About to close the trunk, I hesitated. Maybe Chokchai was right. Maybe I shouldn’t get involved. It could be dangerous, if not physically than economically. I couldn’t afford to lose this job, awful as it was.

Nonsense. She might be chao khao, from the primitive hill tribes; she might even be dirty and disease-ridden, as Chokchai believed, but I couldn’t believe that she meant me any harm. She was just trying to survive.

Don’t forget to leave a comment and contribute to a more peaceful world. And let me know if you a copy of the story!

Personally, I feel the way to stop war is to get psychopaths out of public office, Wall Street, and out of international business boardrooms. They're the ones causing this for greed, power, because they feel entitled to owning the rest of the world, or whatever, while the rest of us suffer. Show me a just war - just one - started by someone who isn't a psychopath or a sociopath (for some, the terms are interchangeable) and not in retaliation for being invaded (eg: Ukraine).

Loved the excerpt and yes, I would love a copy of Refuge in epub format, please.

Hmm. What to say about peace. I do sadly think there are times to fight a war, but mostly, a good reason is missing. Too often wars are fought for reasons of greed or jealousy or other stupid reasons not worthy of the consequences. But whatever the cause, a just peace is always the best. May the conflicts you mentioned end soon and with no more loss of life.

Thanks for the excerpt. I would love a copy. War is a terrible thing. There are no winners.

Thank you for recognizing the conflict in Ethiopia. It is often ignored or forgotten but it is a terrible tragedy.

You always find such wonderful causes to help.

Great post, Lisabet. It's easy to become overwhelmed with so much hate and violence going on both at home and abroad, but you're right--change starts at home. Every little bit of kindness helps to those who receive and give it.
Thanks for sharing!

Thanks for spear-heading these blogs. Maybe I can join next month. And thanks for always putting the focus on a charity that needs the attention. I agree that we all have more in common with each other, than most believe. But yes, the greedy born-rich, those who never have to work, but who exist by living off other people's hard work--those are the folks who work to keep us hating each other. Because if we realized how much we all have in common, we'd rise up and toss them out of office and power, and then maybe we could create the harmony we all wish for. Honestly, I believed all of that peace and love stuff back when I was very young in the 60's. I'm so disappointed that the hippie generation turned out to be just as duplicitous as every other generation, and no real progress was made without two steps backward being required afterward.

Just old me, running a day late and a dollar short like always!
I've stopped doing reviews for the Online Book Club. Even I can only take so much abuse. I'm now prioritizing books by my fellow indie and small press authors. I'll keep watching the messages in the MFRW group, but just in case I miss something, whenever you need a promo post or review I'm likely to be able to help.

Oh pooh, I forgot to mention. Of course I'd like a copy of the book, PDF if you please. Thank you in advance.