Nothing is easy in time of war – #Giveaway #HistoricalRomance #WWII @ChrisKarlsen1 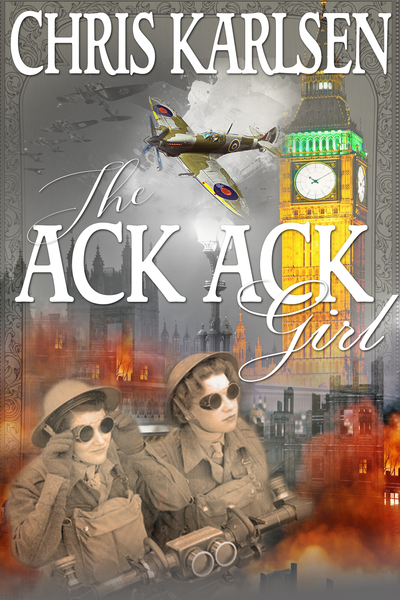 A country under attack and the story of one woman’s fight to protect England and her heart.

1941. The German war machine has crushed all of Europe-only England holds fast. To force a surrender, the German Luftwaffe bombs cities and villages the length of the country. As the battle rages, Britain is in desperate need to put more pilots in the air.

To free up more men a new unit is formed: The Ack Ack Girls. These special teams of courageous women will now fight in the anti-aircraft stations. Determined to be part of the effort, Ava Armstrong volunteers for one of the special teams.

Her unit just happens to be located near an RAF airfield teeming with pilots. Sparks fly, and not just from artillery, when Ava crosses paths with Chris Fairfield, a handsome and cocky pilot stationed there. But nothing is easy in time of war, not even love.

Ava’s blood froze in her veins at the growing roar, or so it felt. Her heart pounded in her ears. The hammering hardly noticeable against the raw fear that filled her as the air raid siren wailed.

Which direction were the planes coming from?

In the basement everyone sat on the floor, their backs pressed to the wall. No one spoke. Everyone held hands. In the flickering lamplight, Penny had grasped Ava’s.

The first explosion sounded from across the river, many blocks away. Ava closed her eyes and whispered, “Thank you.” A wave of guilt hit her. Part of the city was destroyed. Londoners were dying while she gave thanks. But she was grateful.

The ack-ack-ack sound of the anti-aircraft rounds cut the air and joined the warning wail.

Closer now, another barrage of anti-aircraft bursts rang out as the deep rumble from the German planes came their way. Ava and the Gordon family instinctively tightened their grips on each other’s hands.

The roar of the Messerschmitts was overhead now. The bombers growled like gigantic, angry bears. Grandma Gordon fingered the imaginary beads of a rosary as she recited a Hail Mary.

At the first whistle of falling bombs, Ava pulled Peaches to her and cradled the trembling dog. Without thinking, she curled her legs up, buried her head between them, and covered her head with her arms.

The worst thunder clap times a million, that’s how Ava remembered the noise just before the bricks crashed around her. It sounded like the end of the world. 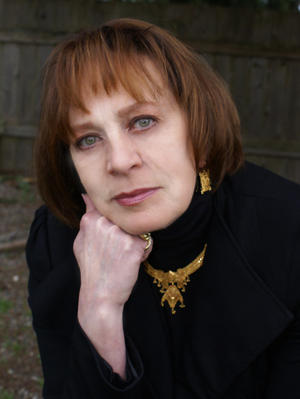 I was born and raised in Chicago. My father was a history professor and my mother was, and is, a voracious reader. I grew up with a love of history and books.

My parents also love traveling, a passion they passed onto me. I wanted to see the places I read about, see the land and monuments from the time periods that fascinated me. I’ve had the good fortune to travel extensively throughout Europe, the Near East, and North Africa.

I am a retired police detective. I spent twenty-five years in law enforcement with two different agencies. My desire to write came in my early teens. After I retired, I decided to pursue that dream.

My past series include my historical/time travel romance series is called, Knights in Time. My romantic thriller series is Dangerous Waters.

Each series has a different setting and some cross time periods, which I find fun to write.

I currently live in the Pacific Northwest with my husband and two wild and crazy rescue dogs.

Here is the one minute reel which is on You Tube, Instagram and my site:

Chris Karlsen will be awarding a $20 Amazon or B/N GC to a randomly drawn winner via rafflecopter during the tour.

Hello, Chris - Welcome to Beyond Romance!

Is there any historical truth behind the notion of a female squad of anti-aircraft gunners?

I want to thank Beyond Romance for the opportunity to feature The Ack Ack Girl. It is a WW2 romance set in England. I loved writing a story in this time and place. Some of my fave movies are from that era. Three are: Casablanca, Saving Private Ryan and Hanover Street. I'd love to hear some favorites everyone else have.
Chris K

This is in answer to Lisabet's question, yes, the Ack Ack Girls were real. After the Battle of Britain, the need to get more fighting pilots in the air became a priority. In order to get more pilots up and flying, the War Office created what they called Ack Ack teams. These were women trained to work in anti-aircraft units. They were part of the Auxiliary Territorial Service. The women in these units were highly regarded by the RAF and their work was dangerous. 700 were killed by enemy fire between 1941 & 1945.
Chris K.