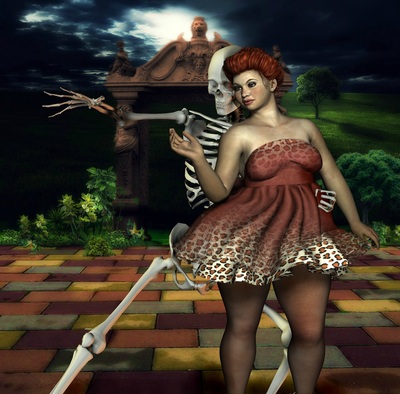 As the Very Naughty face of Naughty Netherworld Press, Lil DeVille has this to say about writing her spicy m/m erotica stories.

I first started writing m/m erotica many years ago, back when being published in an adult magazine was still the goal. This may not be politically correct to say now, but, when I started writing, m/m was the ultimate in taboo.

If only real life were that simple. 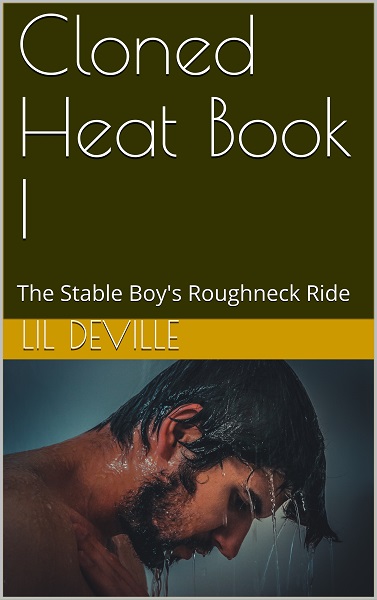 When Pingucury raiders attack their rig, hunky roughneck clone foreman Iker and his equally buff pal Peregrine are forced to flee. The friends encounter Ohannes, a sweet and submissive pleasure clone who offers them shelter.

The excerpt is the first chapter of The Stable Boy’s Roughneck Ride. It introduces Iker Macauley and Peregrine Varga, the two main characters in the Cloned Heat series. Iker and Peregrine are longtime BFFs with benefits.

Peregrine Cenric Varga knew trouble was coming when he heard the deafening roar of multiple motors and saw the dust cloud obscuring the setting suns on the horizon. The muscular 55-year-old roughneck clone turned to his foreman, 59-year-old Iker Mehmûd Macauley, who was looking through his binoculars at the approaching Pingucury raiders.

“Any chance for defense?” Peregrine inquired.

“Negative,” Iker replied, shaking his head. “We need to scatter to the four winds and hope that the military was prepared for this. I would have protested assignment to Igrobos had I known that we would be facing constant attacks from the Pingucury. I’m a simple Hangiri clone rigger, not a fucking career soldier or military clone.”

Iker gave his crew the signal to abandon the Hangiri rig, and the men hurried to their hover-chops, putting as much distance between them and the raiders as possible. The Pingucury were infamous for their brutality to captives.

Sometimes the raiders’ only goal was to steal the raw Gaccov brought to the surface by the Hangiri rig, but this lot also had bloodshed as their goal judging by their impassioned pursuit of the departing roughnecks.

“Scatter!” Iker ordered his team. “Try to keep them away from the settlements. Where the hell are the damn Xawei? They need to do their jobs and protect our people!”

“I hope that there’s a reasonably comfortable and well-hidden cellar to camp in until the threat has passed,” Iker mused. “Preferably one with rations and booze.”

The men cut the lights on their hover-chops and set the engines to coast. They cruised over the dry fields to the stable, where they parked the vehicles and covered them with old blankets and hay. They focused their attention on finding a hiding place.

“Ike, we ain’t alone,” Peregrine whispered. “There’s someone up in the loft.”

“Shit! Well, we’d better bring ‘em with us before they have a chance to get themselves and us captured by the Pingucury. That’s the last fucking thing I need is a scared civvy to babysit. Anyways, I hope that it’s a civvy and not a nest of Pingucury.”

Iker climbed the ladder to the loft with Peregrine close behind. The men drew their plasma pistols, setting them to stun.

“Come on out, we ain’t gonna hurt ya,” Iker called quietly. “But we all need to find a better place to hide and quick. The Pingucury are closing in, and they don’t care much about the Uturn Convention rules for treatment of prisoners.”

The mysterious Ms. Lil DeVille is an enigma who describes herself as a very boring middle-aged lady who writes very interesting stories. When Lil isn’t cooking up torrid tales filled to the brim with nuts-to-butts action, she enjoys baking and crafting.

Lil prefers that her real face remain a mystery. Perhaps it’s because she became disfigured after falling into a cauldron of chemicals like Two Face. Or maybe it’s just that her real face is as underwhelming as her actual personality. Either way, she prefers to share an artistic depiction of her inner spirit (at the head of this post) as created by the wonderfully talented Dina Dee.

Remember - every comment is an entry into Lisabet's Pride Month giveaway!

Posted by Lisabet Sarai at 7:02 AM

Thank you so much for hosting me! Maybe if enough people buy the book, I'll be able to afford a keyboard that isn't always cutting out on me.