Nobody told me it was wrong – #PrideMonth #Bisexual #Poetry 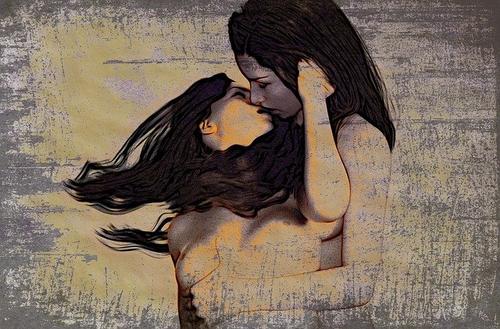 Image by Arthur Halucha from Pixabay

When did I consciously realize that I was bisexual? That I was attracted to women as well as to men? It wasn’t that early, though looking back, I can see I’ve have crushes on women since high school at least. Still, I was mostly consumed with desire for guys rather than gals (and consumed is an appropriate term – it seems I spent my twenties in a state of perpetual lust). The appeal some women had for me was more of a background ache than an urgent need.

My first actual lesbian experience didn’t happen until I was in graduate school, when one of my closest female friends stayed over at my apartment. It was awkward – it was exciting – it was fun. Somehow, though, it was not a huge deal. Loving C. felt as natural as getting it on with one of my male partners.

Lesbian erotica often hinges on the hesitancy of one of the characters, the sense that she’s about take an irrevocable step over some critical line between normal and not. The taboo aspect is front and center. It seems strange, but I’ve never had that sense. Bisexuality just seems to be part of who I am.

Nobody ever told me it was wrong to love a woman or to crave a woman’s flesh. As I grew up, no one ever suggested that attraction to members of your own sex was abnormal or unacceptable. I don’t think that I had many, or even any, examples of same-sex relationships in my early life. Or if I did, nobody bothered to mention it. With my head in a book as it usually was, I might have been oblivious. Still I’m certain no one tried to instill in me any sort of prejudice, fear or hostility with regard LGBTQ people. It was simply a non-issue.

The end result, though, is that I’m totally comfortable identifying as bisexual. There’s no angst, no guilt. I don’t go around broadcasting this, of course. I don’t talk about sex, in general, nearly as much as I think about it!

I’m deeply grateful for this lack of conflict. It leaves me free to savor the appeal of the entire human race, rather than just half of it.

I thought I’d close this post with a poem I wrote to a woman to whom I was powerfully attracted. This was before my encounter with C. Kathy and I were casual friends. Nothing ever came of the connection I felt for her. However, I think – I hope – you can sense the intensity of my desire from piece.

There’s some nervousness here, some hesitancy – but no shame.