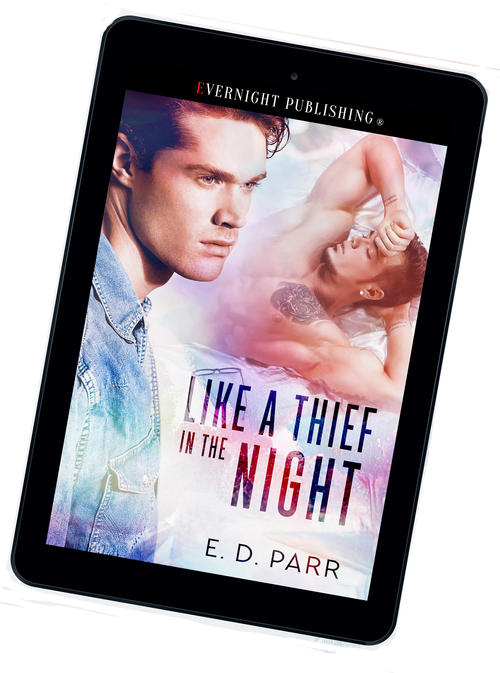 Hi Lisabet! Thank you for inviting me to your blog to celebrate Pride Month.

Naturally, I love all my stories and characters and so choosing one to talk about was a hard choice but I’ve brought along Like a Thief in the Night.

I wrote the story long after one of my work colleagues shared his real life experience of meeting his husband with me. Time passed, but he’d seeded the inspiration for two characters meeting in a work of fiction and that seed finally grew in, Like a Thief in the Night.

In my day job, I’ve met and become friends with a group of gay men whose love for their partners and shared tenderness fills my heart every single time I see them. Lately, we’ve only met online, which is how we all work now, but it’s still the same. They exude joy in each other. Their love, visible in their little touches and kisses, is good for my soul.

Of course, Like a Thief in the Night isn’t their exact story. Only the way my characters Jon Palmer and Saxon Dearing meet is close to the truth of how my friends Tom and Jonathan met, although Jon Palmer’s description and talent is modeled on Tom. These dear friends told me their story nearly eleven years ago when we’d been working together for some months and grown close. They were thrilled I used it in my story.

I was already writing gay romance stories but surprisingly in 2008, many publishers saw them as a huge risk, so my first published fiction was the usual male/female romance. At that time, I relaxed by writing fiction. I’d always moved in circles where my friendship groups contained gay and lesbian people. I’d worked for gay guys in the entertainment and arts industry. Sometimes, societal unpleasantness and threats made their lives miserable. I admired their courage, but more than that, I had never understood why homosexuality was frowned upon, and worse, made illegal in the past.

In 2014, my first gay romance/suspense was published. Joyfully, I went back to writing gay stories; gay romance, suspense, paranormal romance, fantasy, and sci-fi. I hope my stories give as much pleasure to my readers as I feel writing them.

Josh and Ryan, for sharing your real life love story with me way back in early 2010, and to Tom and Jonathan, your devotion to each other, and hilarious anecdotes of your meeting and life together are a continual source of inspiration.

I’ve chosen this teaser from Like a Thief in the Night (it’s the lovers' meeting).

Saxon’s eyelids drooped. He caught himself before he fell asleep with his laptop balanced on his thighs as he checked Singapore trading. He logged out, closed the lid, and slid the machine under his big low bed. It grazed the side of the baseball bat he kept under there, just in case. A habit left over from the early days of his career when he lived in a neighborhood fraught with crime. Saxon had cleaned his teeth earlier, so he threw the pillow that had supported his back to the other side of the bed. Fatigued, he dropped to sleep as soon as he lay his head down.

Some change in the familiar sounds he generally slept through woke him. He listened without focusing in the darkness blanketing the sleeping end of his studio apartment. Then, with a growing sense of dread, as his eyes became used to the dimness, the realization that someone opened the prismed skylight over the living area sent a prickle of sensation up his spine. He rolled silently from his bed, and prone on the warm wooden flooring, he clasped the baseball bat to his side.

Fearful, but convinced he had the element of surprise to confront an intruder, Saxon watched as a man, tall, arm muscles straining, but obviously practiced at the maneuver, hung through the gap created when he’d pushed the skylight along. Saxon knew there’d once been a stair to that skylight and the roof, but the agent told him the builders had sealed off access in the conversion of the building. He muffled a ragged breath. Should I rush the guy as soon as he’s in the room? His heart hammered. Undecided, Saxon lay there, ramrod stiff, clutching his bat.

The man’s feet dangled only a little way from the floor.

It’ll be raining on my polished floor through that gap. The thought traveled through Saxon’s troubled mind. His grimace became a grim smile.

The trespasser dropped with a soft thud. He strode to the European laundry, and pulled open the right side of the louvered doors. He brought a broom and closed the skylight from below. The glass prism slid along easily and the man stilled for a moment gazing up.

Fucking hell, he knows where things are. Under cover of the pooled darkness and his bedframe, Saxon stared as the intruder took the broom back to the alcove room.

The man closed the doors, turned, and after flipping on the floor lamp standing next to the saloon doors of the kitchen, went through them.

The lamp cast a soft amber glow over the immediate area and raindrops glistened in the man’s dark hair as he arrived back with a wad of paper towel, and cleaned up the splattering of water on the floor. Then he took off a backpack he wore, slipped it to the floor by an armchair, and retreated to the kitchen. In seconds, he was back. He must have left his rain-wet jacket in the kitchen because he appeared in a dark sweater.

Saxon discovered he was holding his breath, when, as the guy disappeared through the bathroom door, dizziness engulfed him. He gathered his courage as he gulped in air. With a quick rub of his elbow that had supported him on the luckily heated but hard floor, he stood and rammed his feet into the leather tartan-lined slippers he favored. Hanging onto his baseball bat, Saxon crept toward the bathroom, trying not to let the soles of his slides slap on the parquet. Halfway there he froze.

A line of light from the bathroom fell across the floor and armchair on that side of the room. Only a little ajar, Saxon could still hear the unmistakable sound of the shower through the opening. What the hell? He’s taking a shower. What sort of burglar takes a shower? Saxon sagged onto the arm of the chair. Fear and now bewilderment weakened him. He hadn’t time to do more than stand as the intruder came out of the bathroom wearing one of Saxon’s big fluffy towels around his waist.

Saxon stared at him. Fuck, I could do without him being hot. He ran his gaze rapidly over the delicious hard chest on display and then locked eyes with the guy. He is gorgeous.

Light from the bathroom lit the young man from behind. His damp hair stroked his cheeks in unruly strands. He held his hands up, palms out.

Saxon lifted his baseball bat. “What the hell do you think you’re doing?” His voice cracked.

The guy nodded at the bat. “You won’t need that. I’m harmless. I’m sorry. I didn’t expect anyone to be home.” A contrite expression passed on his handsome face, and then Saxon was certain amusement replaced it.

Saxon dropped his arm and the bat swung by his leg. “Clearly.” He glared at the man, but inexplicably couldn’t summon anger, and in the face of this half-naked gorgeous guy, his fear disappeared and curiosity filled him. “You’d better explain yourself.”

Gorgeous businessman, Saxon Dearing buys a pied de terre in the city where he works. Only using the place for three nights, he goes home to his beachside house for the rest of the week. At thirty-two, immersed in his work, he doesn’t know he’s lonely until delicious, twenty-five year old Jon Palmer literally drops into his life during a thunderstorm.

Artist Jon struggles to sell his paintings from a tiny studio, and works in a city gallery to pay his rent. As the two men fall in love, Jon can’t overcome the idea his lack of success is a barrier to telling handsome, wealthy Saxon how he feels.

When his boss offers him a dangerous way of making money, Jon must make a choice.

Will he risk telling Saxon he loves him or let his lack of confidence lead him astray and away from the man who loves him, too?

In essence, while all E. D.’s stories are love stories, heavy on plot and character driven, they are also open door romances with explicit love scenes. E. D. says, ‘why hide a delicious thing like sex and the gorgeous experience it can become between people’

To celebrate Pride Month I have two giveaways. Lisabet will choose the winners of each eBook bundle randomly, but you need to comment on her blog including your email address (obfuscated is fine) in order to be contacted should you win.

Note that every comment is also an entry in Lisabet's Pride Month contest!

The Dreamboat, and String of Pearls, both with elements of suspense and magic, and are set in the same Sci-fi world and my latest release with Evernight Publishing, Love in Danger.

N.B. All books in the bundles contain MM sex.

You can read blurbs for all the books in each bundle by following the link on the ribbon banners on my Evernight ED Parr page: https://www.evernightpublishing.com/e-d-parr/

Thank you for helping me to celebrate Pride Month. And thanks too, for your generous giveaway!

That was such an amazing post. Thanks for that and the excerpt.
debby236 at hotmail dot com

Wow How seamlessly you have woven the subtleties of life into this love story. It makes is so easy to read and so wodneful to absorb their fellings and to put yourself inot the oicture, so to speak! Thanks for a great read, and a lovely contest! Continued success with your writings & stay healthy out there! gsreddom@hotmail.com

Once again edited! (lol) (Lisabet can you take down the old one xo) Wow How seamlessly you have woven the subtleties of life into this love story. It makes it so easy to read and so wonderful to absorb their feelings, then place yourself in the picture, so to speak! Thanks for a great read, and a lovely contest! Continued success with your writings & stay healthy out there! gsreddom@hotmail.com

It's really interesting that you've told the folks who inspired your story, that you featured them in your book. I've based some events in characters' lives on real events that happened to friends, but unless they read my books, they won't know. Some look down on all romance and won't touch it--their loss, right? And I'm with you--open door sex is way more fun!
Great excerpt, by the way--intriguing also.

Big congratulations to Colleen and to Sherry, who have won E.D.s book bundles. I will be contacting you to find out your preferred format.

And thanks to everyone who dropped by to say Hi and help us celebrate Pride Month. You're all added to my giveaway.