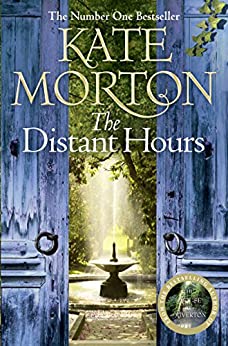 The Distant Hours by Kate Morton

For as long as she can recall, imaginative and bookish Edie Burchill has had a prickly, distant relationship with her practical, unemotional mother. She attributes the strain to the difference in their personalities, or perhaps to the lingering shadow of her dead brother whom no one is willing to discuss. So Edie is astonished when a letter, buried in a drunken postman’s attic for half a century before being finally delivered, moves her stoic parent to tears. The return address is initially unfamiliar - Milderhurst Castle in Kent – but when Edie succumbs to curiosity and visits the site, she realizes her mother brought her here as a child.

Under pressure, her mother Meredith confesses that she lived at Milderhurst for nearly a year during the Blitz, when Londoners sent their children to the countryside for safety. Milderhurst was the ancestral home of renowned author Raymond Blythe, especially famous for his horror/fantasy tale The True History of the Mud Man, one of Edie’s childhood favorites. When Meredith had arrived from the city, his brilliant and mercurial daughter Juniper Blythe had claimed the lonely teen, brought her to the castle, and become, for a short, blissful time, Meredith’s friend and mentor. The lost letter had been written by Juniper, but was never delivered.

Now the vast, dilapidated edifice is inhabited by Raymond’s elderly children, who struggle to keep the place from crumbling around them. The eighty-something twins Seraphina and Persephone – Saffy and Percy within the family - could not be more different. The former is a softly feminine, domestic dreamer, the latter a brusque, practical creature without a fanciful bone in her angular body. Both, however, would do anything to protect their disturbed and unpredictable half-sister Juniper, who was supposedly driven mad by the mysterious disappearance of her fiancé on a stormy night in 1941. Indeed, the castle is home to many mysteries – forbidden, locked rooms and secret passageways; abandoned pools and filled-in moats; tragic stories of fire and death; secret loves and secret sorrows.

Originally motivated by her mother’s history, Edie soon finds herself entangled with the castle’s inhabitants and their fate. Both a participant and an observer, she follows the threads of history, teasing out truths: about the lost Thomas Cavill, Juniper’s lover; about Raymond Blythe’s monomaniacal control over his daughters; and about her own mother, who turns out to have unexpected depth and desires that Edie had never guessed.

I absolutely loved The Distant Hours. Though more or less contemporary, with flashbacks to World War II, the book has a Gothic atmosphere reminiscent of Jane Eyre or Wuthering Heights. Kate Morton spins her tale with great skill and discipline, revealing a juicy fact here, dropping in a misdirection there. The sisters Blythe are richly imagined and wonderfully drawn. As readers, we meet them in youth and in age, at all the stages in their lives, and come to appreciate their strengths and to understand their seemingly cruel choices. Indeed, all of Ms. Morton’s characters invite sympathy despite their flaws, even the arrogant and self-centered Raymond Blythe, who is ultimately responsible for a great deal of pain.

Milderhurst Castle itself is almost a character. We see it in its prime as well as in its decline. It’s not hard to believe, as Raymond and Juniper do, that there are ghosts whispering in the walls.

The gorgeous, evocative prose is a joy to read. Like Edie, I am a fan of the Brontë sisters; this novel offers some of the literate grace of nineteenth century English. At the same time, the novel has an intimate quality that is thoroughly modern.

Though The Distant Hours is six hundred seventy pages long, it doesn’t drag. From beginning to end, it’s a stimulating, curiosity-provoking, emotionally satisfying read. Ms. Morton does a wonderful job tying up the main plot threads at the book’s conclusion. Still, I was sorry when the story was over.